If you’re a Disney fan, the reality that the parks likely won’t reopen until sometime in 2021 is starting to sink in. Though Disney World and Disneyland are closed indefinitely, there’s still a lot going on behind closed doors, according to a recent video by the Disney team. The public isn’t allowed in, but animals need to be cared for, grounds need to be maintained and Disney cast members are keeping busy at home with a fun new video series.

Among the big news that’s happened at Disney since the theme parks were closed is the birth of a baby zebra at Animal Kingdom. A Hartmann’s Zebra foal was born on March 21. The foal, named Asha, weighed in at 65 pounds and was standing within 30 minutes of birth! You can see sweet footage of baby Asha here.

Security teams are still protecting the grounds and raising the flag at the Magic Kingdom every day as they always have. The horticulture team is also still working hard and currently focused on Epcot, where the annual Flower and Garden Festival kicked off less than two weeks before the parks were shut down. The team is tending to the festival’s topiaries and plants, which include nearly 70,000 blooms surrounding the lakes among many other mini-gardens as well. The guest relations team is also still working with travelers to help them cancel and reschedule vacations and Imagineers are still filing permits and coming up with future projects. For more on what Disney employees are up to at the parks these days while they’re closed, watch this video.

If you’re in need of a regular Disney fix at home, we’ve rounded up 10 fun things you can do with your mini Disney cast members at home while the parks are closed:

See What Disney Cast Members Are Up To During Quarantine
This new #DisneyCastLife video series highlights the week’s favorite cast-related stories. This week’s special guest is actress and entrepreneur Ashley Eckstein, who became a Disney cast member on her 16th birthday. The voice of Ahsoka Tano in the Star Wars Rebels and Star Wars: The Clone Wars, Eckstein also has her own lifestyle brand called Her Universe. The video also showcases how Disney is spreading cheer to the Orlando Police Department and highlights messages of hope in support of the Anaheim Police Department.

Take Part in Disney Cruise’s New Challenge
If you’re a fan of Disney Cruises, you probably have fun memories of walking through a ship and seeing stateroom doors filled with decorations. Disney is hoping to bring some of that cruise line spirit into everyone’s homes with a #DisneyCruiseLife challenge to decorate your own Disney Cruise Line “stateroom” door.  Everything you need to do it is in a downloadable kit you can print and decorate with.

Go On Virtual Disney Adventures Around the World
First up is a virtual trip to Montana. On this #DisneyMagicMoments virtual vacay,  you can play charades, Montana style, take a video tour of the state’s most beautiful sights and make homemade Mickey S’mores to add some yum to your glamping/camping backyard adventures.

Watch Disney’s Most Iconic Nighttime Show, Virtually
“Happily Ever After” is one of the most spectacular nighttime shows ever created at Disney Parks and you can now watch a special pre-recorded viewing of it at the Magic Kingdom. Watch the video here and don’t miss the wallpapers you can download, too. 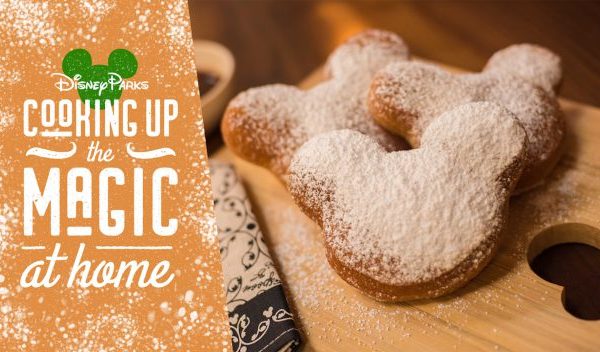 courtesy Disney Parks blogDo Some Baking, Disney Style
Die-hard fans will love making this Disney classic recipe for beignets, inspired by the ones served up at New Orleans Square and Disney’s Port Orleans Resort – French Quarter. Yeast, powdered sugar and flour are among the basic ingredients you’ll need to serve these up.

Learn to Make a Pollinator Garden for Your Home From a Disney Expert
In this video, Disney Conservation Manager Dr. Zak Gezon shares tips on how to create pollinator-friendly garden areas at home. In this video he put together from home, Dr. Gerzon shares affordable tips to attract and nourish pollinators in your own backyard.

Take a Virtual Ride on the Incredicoaster
Whether you’re all about the adrenaline rush of a coaster ride or you’d rather experience an attraction that’s a little more tame, this virtual experience from Disney California Adventure park is thrilling either way. For some added fun, see how many times you can spot Jack Jack on the ride.

Get a Behind-the-Scenes Look at Imagineers at Work
In this video series, you can follow along with an imagineer to get a sense of what happens to bring to life some of Disney’s most popular attractions. Imagineers create new Disney experiences using technology like robotics and artificial intelligence. Be sure to watch all four parts of the video series for the full experience.

Watch Disney’s Zebra Foal, Asha, Be Her Adorable Self
As we mentioned, one of the most exciting things to happen at Disney recently  was the birth of a sweet zebra foal named Asha. Last week, she made her grand entrance onto the Kilimanjaro Safaris savanna with her mother, Heidi. We promise the video footage of mother and daughter at Hartmann’s Mountain in Disney’s Animal Kingdom Theme Park will be one of the sweetest things you watch this week.

Read More:
Hop on Disney Rides from Across the World Without Leaving Home
Make Your Own DIY Version of the Disney Dole Whip
Disney Loves Can Start Their Imagineers Career With a Free Class