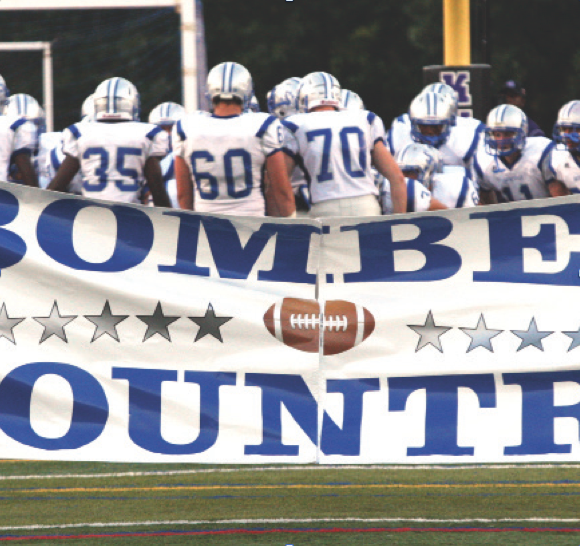 “‘Hootie hoo,’ the older players yelled before their home game that night, flicking the lights on and off and on again. Then they tripped a freshman in a T-shirt and football pants, letting loud music muffle any noise the boy made as he fell. Two pinned the younger boy’s arms, while others punched and kicked him—not viciously, but hard enough to matter, two witnesses said. He curled into the fetal position and was groped by his attackers.”

The senior players have been charged with aggravated sexual assault and suspended from school. The head coach (who regularly left the team unattended in the locker room in hopes of promoting “team building”) is on indefinite leave (the four assistant coaches have since been reinstated)  and the football season for the Sayreville Bombers is over. News is trickling out from other high schools (like Central Bucks High School in Doylestown, PA, where the football season was cancelled after confirmed reports of similar abuse), suggesting the events in Sayreville aren’t isolated.

Meanwhile, parents, school personnel and legislators throughout New Jersey are wondering how this could happen in the state with the toughest anti-bullying law in the country, and what they can do to protect their children from it happening to them.

Behind the Anti-Bullying Bill of Rights

In 2010, the State Legislature passed the Anti-Bullying Bill of Rights in response the suicide of Tyler Clementi, a freshman at Rutgers University who jumped off the George Washington Bridge after being bullied by two fellow students who conspired to film him having sex with another man. At the time, the Centers for Disease Control and Prevention (CDC) reported that 20 percent of all New Jersey high school students experienced harassment, intimidation and bullying incidents on school property (the 2011 national average was 20.1 percent).

This new law provided a clear definition of bullying and instituted procedure for responding to incidents. The law defined bullying as an act that pivots on a victim’s personal attribute, like race or sexual orientation or disability, and that is powerful enough to interrupt student learning. It is not two kids horsing around, but an intentional infliction of physical or emotional harm based on some distinguishing characteristic. The law mandated that every victim is offered counseling and support, and that every bully is disciplined.

All school staff members, volunteers, contractors, leaders and board of education members must participate in formal training for preventing and responding to incidents of harassment, intimidation and bullying. However, the length of time spent training and the topics covered vary between school districts.

To investigate accusations, each school must appoint an anti-bullying specialist, typically a principal or guidance counselor, and a school safety team, comprised of the principal, a teacher and a parent. When an incident of bullying is either reported by a student or parent, or witnessed by a staff member, the district responds with a series of mandated steps, including strict timelines for reports, resolutions, hearings and submission of data to the school board, community and the state Board of Education.

To improve student awareness, the Department of Education has designated the first week of October “Week of Respect,” during which districts will provide age-appropriate education on preventing harassment, intimidation and bullying. (Ironically, it was during this week that the Sayreville hazing occurred.)

In order to regulate the success of procedures, twice a year each superintendent must report all incidents of violence, vandalism, harassment, intimidation and bullying to their district’s board of education. Based on these reports and each school and school district’s efforts to meet the Anti-Bullying Bill of Rights requirements, the Department of Education assigns a grade that must be posted on the homepage of the school’s website and homepage of the district’s website.

Is it making a difference?

And yet, there are three controversial elements to the anti-bullying law. One is that school districts must provide training and implementation without any financial backing from the state. This is technically an “unfunded mandate,” illegal under NJ statutes. So in 2012, the law was appealed and the bill was tweaked to include a $1 million one-time grant to cover costs, but when divided between 600 school districts, that’s inadequate. School boards and administrators sigh in exasperation and soldier on.

The second controversial element is that the law encompasses not only harassment that occurs on school grounds, but also on school buses, during vacations and even on social media. How can a district control Facebook or Instagram or any of the various web-based communications available to schoolchildren? When and where does the liability of a school district end? In cases of harassment, intimidation and bullying, the answer, presumably, is “never.”

The third controversial element is most upsetting of all. Despite this vigilance, rates of school bullying are going up in New Jersey, not falling. A 2013 New Jersey Youth Risk Behavior Survey conducted by the CDC shows rates have increased to 21.3 percent (the national average is 19.6 percent). Certainly, local school district awareness is higher than it’s ever been, but we’re not just seeing the numbers fall yet. The law is only in its second year, however, so there’s still hope for a turnaround.

Laura Waters is a NJ school board member and the author of the blog NJ Left Behind. The views expressed here are her own.