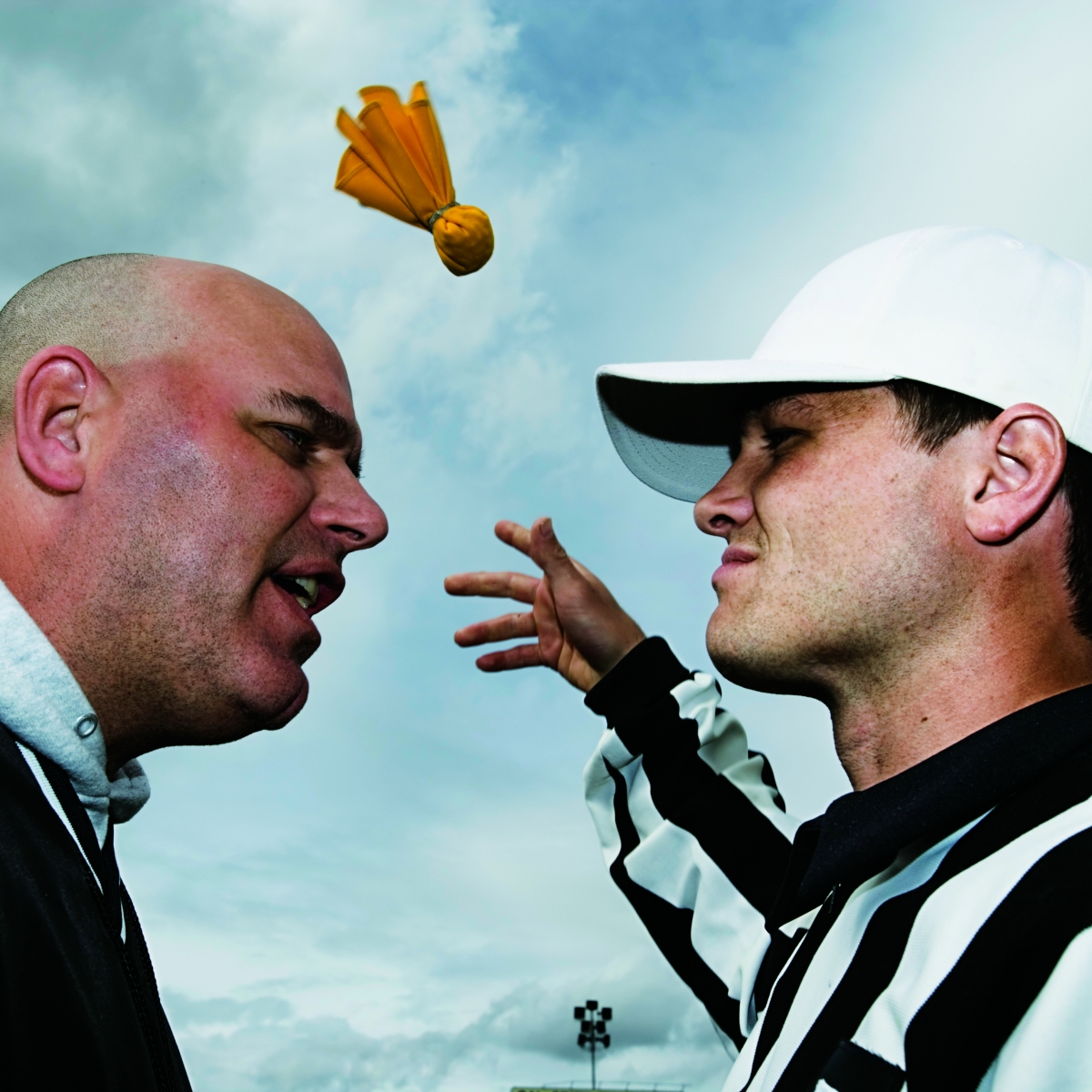 One of my husband’s fondest childhood memories is when he was 12 years old and his Little League team won the town championship. He can recall every player on that team, their field position, and every play that occurred leading up to victory. His best memory of that day is sharing it with his dad, who was also the team coach.

For decades, sports have been an important part of the lives of teens and their parents. But a lot has changed since my husband’s team won their pennant race. Rick Wolff, host of "The Sports Edge” on WFAN radio for 15 years and author of The Sports Parenting Edge (2003, Pond Lake Productions Inc.), says, “In the past 20 years the intensity of youth sports around the country has revved up.”

Bruce Brown, director of Proactive Coaching, says, “The biggest change in youth sports is going from youth-controlled play to adult-controlled play.” Years ago, kids just got together in their neighborhood and played ball together. It wasn’t until they were older that they started playing on organized, competitive, adult-run teams.

Many would argue that the increased parental involvement in youth sports has been a detriment. Incidents of parents acting inappropriately at games—screaming at coaches and referees, putting too much pressure on young athletes, etc.—happen more and more often. Extreme cases of parents behaving poorly at kids’ sports games have gained media attention, including a July 2013 fight that occurred between a parent and coach at a Little League game. A video shows the youth athletes crying after witnessing the brawl. Wolff says, “When it comes to youth sports, somebody has to be the grown-up.”

Gary Cohen, a father of three from Randolph, enjoys watching his kids play sports. Cohen says, “I have a sense of pride when they achieve and feel their disappointment when they are not successful. There will be a void in my life when my son graduates high school, and I can no longer watch him play.”

Like Cohen, many parents enjoy watching their child compete in sports and grow as a player. With youth sports today requiring so much commitment, it is not uncommon for a family’s schedule to revolve around their kids’ sports games and practices.

Caytha Jentis, mother of two from Ridgewood, remembers a point when it
felt like all she and the mothers talked about was travel soccer. Jentis says, “Travel soccer dominated our conversations—tryouts, team placements, game scores—
it consumed us. Friends were influenced by what team your kid was on and sitting on the sidelines at games became my
social life.”

Wolff says, “Today’s parents invest a lot in their children’s sports, financially and time-wise. Many expect that their child will be the next Mia Hamm or Derek Jeter, or at the very least be getting a scholarship to play sports at a Division I school. But these are very unrealistic goals, especially for young kids whose athletic potential is unknowable. Less than 4 percent of high school varsity sports players go on to play at any college level, and even less of those athletes will ever play professional ball.”

Ask kids the number-one reason they play sports, and the most common answer is “because it is fun.” But if you ask parents, you may not get the same response. Instead, they mention life lessons, increased skills, and the potential to play at higher levels.

Brown says, “For many kids, participating in youth sports today, technical and competitive levels have been brought down to such a young age, the joys of playing ball are getting lost way too soon. Instead of feeling excited about playing, kids start to feel pressure before they are ready for it. They feel the score matters and their playtime is directly related to performance.”

Parents may unwittingly add to their child’s stress by emphasizing results over effort. Ann Cusack, a mother of one from Cranford, says, “Bad parents can hijack a good experience from kids.” Kids should want to play their sport, be excited to go to practice, and to have their turn on the field. If they aren’t, that is a red flag for parents.

Whose game is it anyway?

Another problematic issue with youth sports is parents over-indentifying with their child athlete. Wolff says, “Many parents look at their child as an extension of themselves as if they were one person. They are egocentric and believe that having a ‘star’ athlete makes them a ‘star’ too.”

Wanting a child to do well is natural, but it can be taken to extremes. Jentis says, “Parents are grooming their kids at a young age to be successful athletes and placing a lot of their own self worth on it.” Cusack agrees, adding, “I notice a lot of parents seem to feel the need to publicize their kids accomplishments—from bumper stickers to Facebook posts.”

Jentis herself started to question why it all mattered to her so much. She says, “For me, it was part of that whole helicopter parenting. I was overly involved with my daughter’s sports life, and I needed to separate.” (Jentis wound up going back to work and using her experience to write, direct, and produce the movie Bad Parents based on her experience as a soccer mom.)

Like my father-in-law, many parents choose to coach their child’s sports team, and it can be a very rewarding experience. “I have coached all three of my children in various sports," says Cohen. "Some of the most memorable times I have had with my children and their friends have been on the ball field.”

But when parents are not the coach, their role is very different. Many feel entitled to direct from the sidelines, perhaps because they think they have something valuable to offer. Brown says, “Parents need to ask themselves, 'Why am I yelling?' Athletes need to be focused on the field. Parents who yell coaching tips from the bleachers are distracting and ineffective. Top athletes tune out the crowd, including their own parents, and play instinctively.”

There is a big difference between cheering a child on and offering encouragement and telling them what to do and how to play. Cohen says, “I have seen everything from parents getting verbally abusive with children to referees and even coaches.” Says Cusack, “There was an incident where a parent ran on the field and threatened a coach screaming, ‘I know where you live!’ It goes beyond competition; it is scary and inappropriate.”

Most sports leagues require players and parents to sign sportsmanship forms regarding fan behavior. But parents are reluctant to step in and confront another parent who is acting poorly. Wolff says, “Children today clearly enjoy Mom and Dad watching them but not embarrassing them. Parents need to adhere to the sportsmanship guidelines and not be afraid to calmly approach another parent who is acting inappropriately.”

In sports, you win some and you lose some. As thrilling as it is for parents to see their child score a winning goal, it is just as heartbreaking to watch him strike out with bases loaded. Brown says, “No one wants to see their kid fail, and athletics brings public failure. It is hard for parents to watch their kids struggle.” Parents cannot protect their kids from disappointments in sports or, for that matter, in life.

In his many interviews with teen athletes, Brown found that one of the most upsetting things for kids was the drive home with their parents after a game. Brown says, “Teens need time to decompress. The last thing they want is to do is relive a failure the minute they get in the car or be told what they could have done better.”

As upsetting as it is for a parent to watch their child miss a goal or strike out, these moments can also provide a learning opportunity. Brown says, “Rather than treating a sports failure as a catastrophe, parents can help their child grow from the experience. Kids learn how to recover from a mistake, prepare better, and ultimately play better.” Cohen adds, “What makes sports great is seeing a kid, regardless of her age or ability, giving everything she has.”

Playing sports offers teens so many life lessons—it is up to parents to ensure that they get to learn them. Cusak says, “As a former coach and as a parent, I can say that adults involved in youth sports have the power to be the best part or the worst part of a kid's day—regardless of what the scoreboard says.” Follow these guidelines:

Be interested and engaged
Be present at games—don’t check your cell.

Praise effort, not the game score
Make sure your child knows you are proud of her regardless of whether she wins or loses.

Be a role model
To your child and to other parents.

Keep Perspective
Even good parents can get overly excited at a child’s game.

Keep the overall goals in mind
The most important thing is to have fun, stay safe, and encourage your child to do his best.

Contributing editor Randi Mazzella is a mom of three from Short Hills.