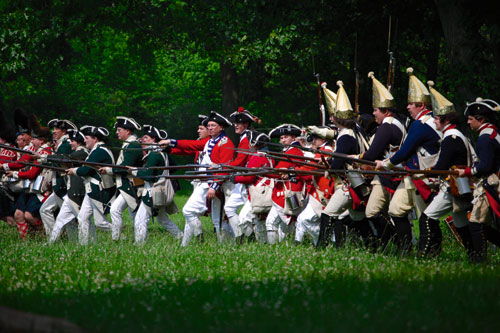 On a hot summer day in 1778, the Continental and British armies converged in the fields and forests that now make up Monmouth Battlefield State Park at 16 Business Route 33, Manalapan, on the border of Freehold. While the battle was a draw with both sides claiming victory, the fight was filled with surprise attacks, an ordered withdrawal, and an angry George Washington reversing the retreat.

You and your family can watch the drama unfold 244 years later, by attending the annual reenactment of the Battle of Monmouth.

The reenactment takes place annually on the third weekend in June, this year June 18 and 19.

Revolutionary War re-enactors will gather at Monmouth Battlefield State Park to commemorate the anniversary of the battle. Visit their encampments, pass pacing sentries and see enlisted men cleaning their weapons or idling away their time gambling. Watch the women of the army cook, mend and launder. At the parade ground, see soldiers drill or artillerists fire their cannon. During the battle, hills will reverberate with cannon and musket fire as columns of troops maneuver, form line and charge.

Keep an eye on your children or the recruiting sergeant may have them drilling with wooden muskets.

On Saturday, the encampment and programs take place from 10am – 4pm. The reenactment is at 2 pm.

On Sunday, the encampment and programs take place from 10am – 3pm. The reenactment is at 1:30pm.

For more information on the battleground, visit https://nj.gov/dep/parksandforests/parks/monmouthbattlefieldstatepark.html

For the schedule of events, visit https://www.friendsofmonmouth.org/schedule22.html#:~:text=Annual%20reenactment%20of%20the%20Battle%20of%20Monmouth,-Encampment%20and%20programs&text=Reenactment%20at%201%3A30%20PM.