From picturesque tree-lined streets to friendly neighbors, this Union County borough is beloved by its residents. “When we relocated to New Jersey, away from family, we were looking for a town that felt welcoming, warm and also had a great school system,” says mother of two Jessica Short, who’s lived in New Providence for eight years.

It’s also home to one of the state’s highest-ranked high schools—a gilded lily in a suburb already brimming with family-friendly draws. And with an Olympic-sized pool, an ice-skating rink, eight athletic fields and eight tennis courts, there’s plenty to do.

Whether you’re diving into the community pool, sampling IPAs at Untied Brewing Company or munching avocado fries at Prestige Diner, New Providence is brimming with family fun in the form of events like summer concerts, a fishing derby and fall street fair. Short loves taking her kids to Zita’s Homemade Ice Cream in the summer and ice skating at Oakwood Park’s pond in the winter.

Fun fact: Tom McCarthy, who co-wrote Disney’s Up and the biographical drama Spotlight, grew up in New Providence.

See the rest of the top towns from Union County here, including Cranford, Summit, Westfield, and Scotch Plains. 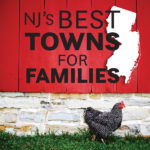