On January 16, Adventure Aquarium unveiled their newest exhibit – Dinosaurs of the Deep – and it’s not just the creatures that are totally massive. This exhibit has taken over the entire aquarium, covering more than 5,000 square feet. We got a sneak peek. 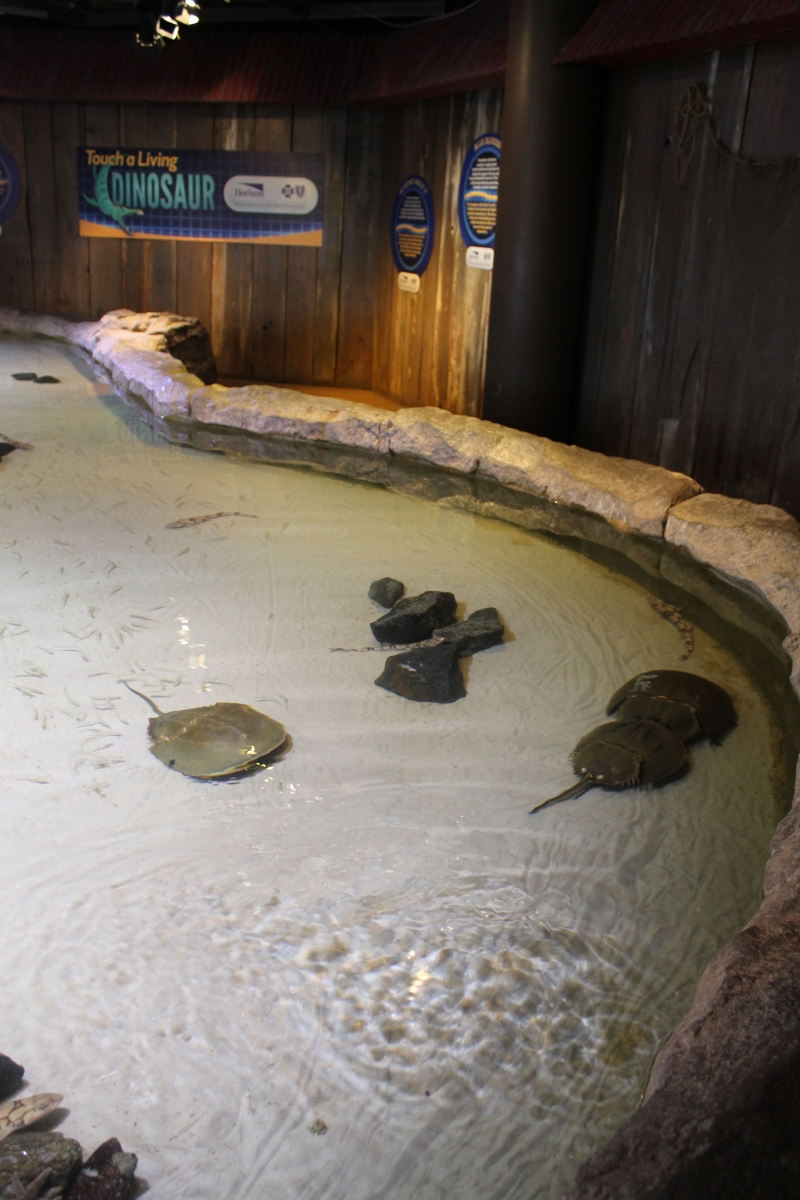 The best place to “start” the Dinosaurs of the Deep exhibit is in the open area near the 4D movie theater. They’ve transformed the Touch a Shark experience into Touch a Living Dinosaur area. What do you get to touch? A whole bunch of horseshoe crabs (there are a few sharks sharing the space too). The horseshoe crab can be traced back almost 450 million years! 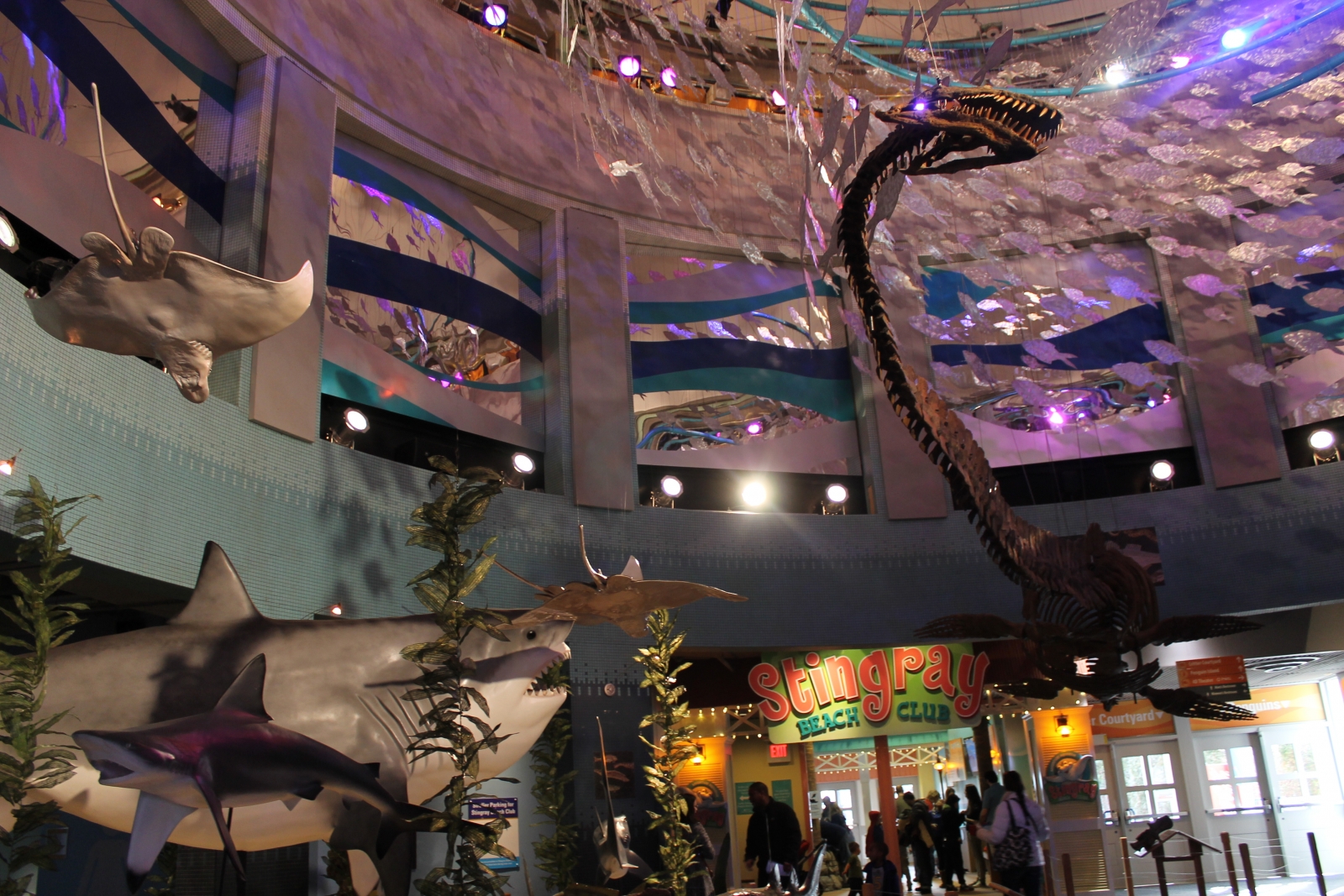 They’ve also got it set up so you can see a giant ancient sea turtle, right next to the giant tank that is home to their modern sea turtles. And there are some faux fossils, that the kids can interact with in order to figure out which sea turtle skull is which. 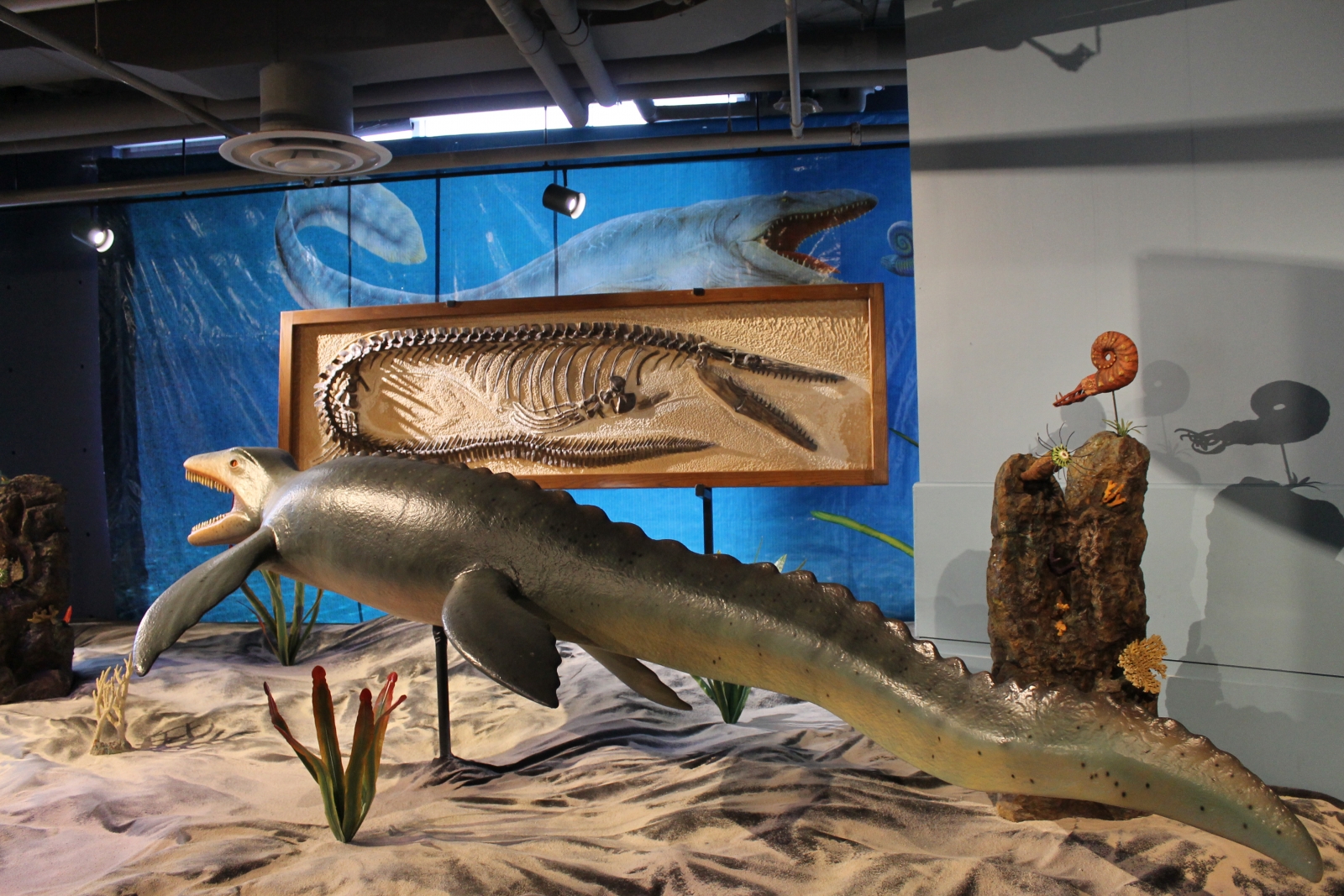 Overhead as you are walking around, you’ll spot some of the massive replicas of these aquatic reptiles over your head, and they’ve done a great job of putting these really enormous creatures next to examples of modern sharks, so you can really visually see what it would have been like to be in the ocean next to these creatures. And where there are fossils, there are also models of what they would have looked like, so kids don’t get bored just looking at bones. 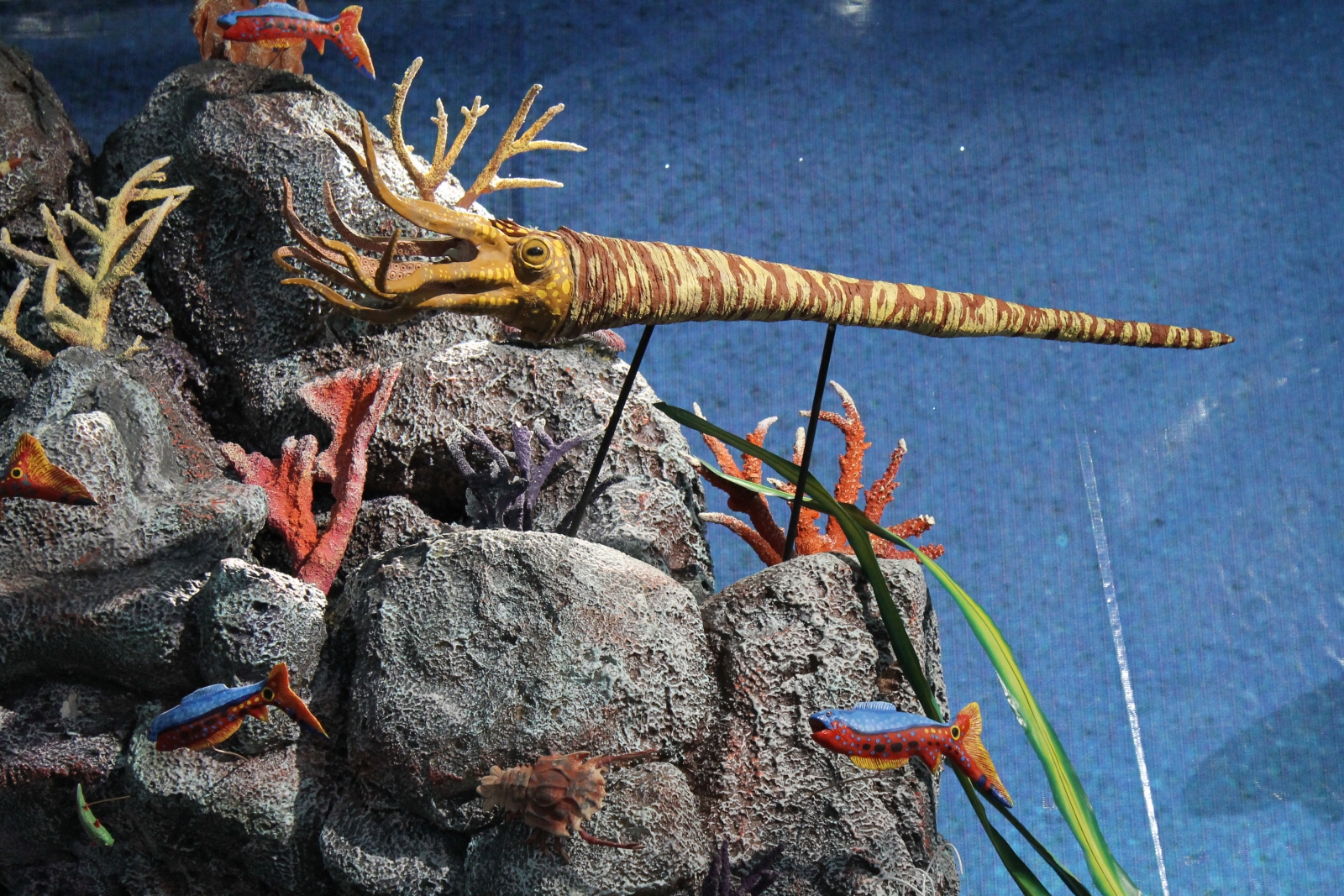 One stand out display is the huge prehistoric coral reef. It’s brightly colored, as you’d expect, but filled with some truly creepy looking trilobites and ancient fish. No cute clownfish here. 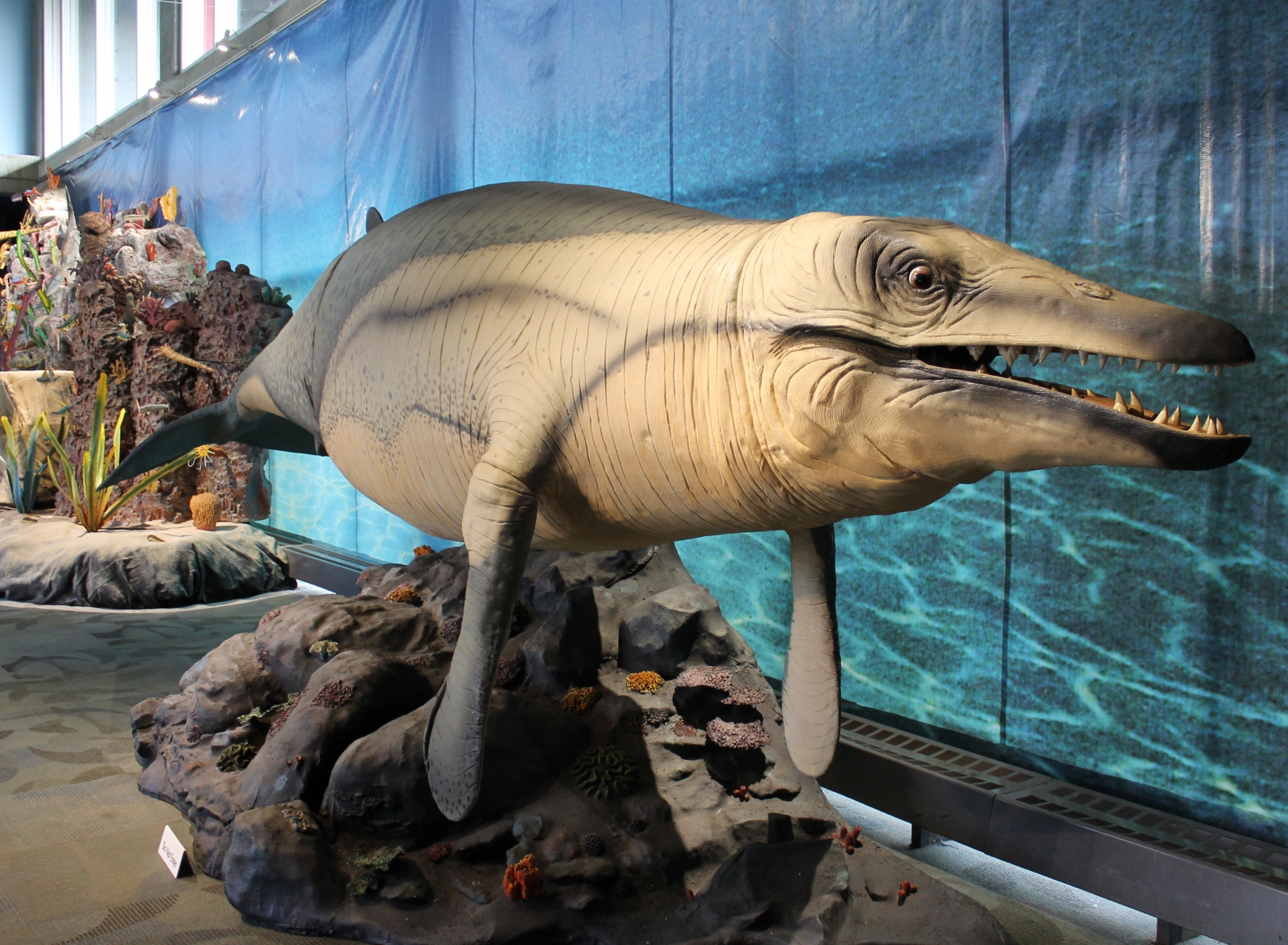 Over in what used to be the Jules Verne Gallery, they’ve transformed the space with lots of living creatures that have existed since the prehistoric era, like the octopus, jellyfish and their new addition – a nautilus. 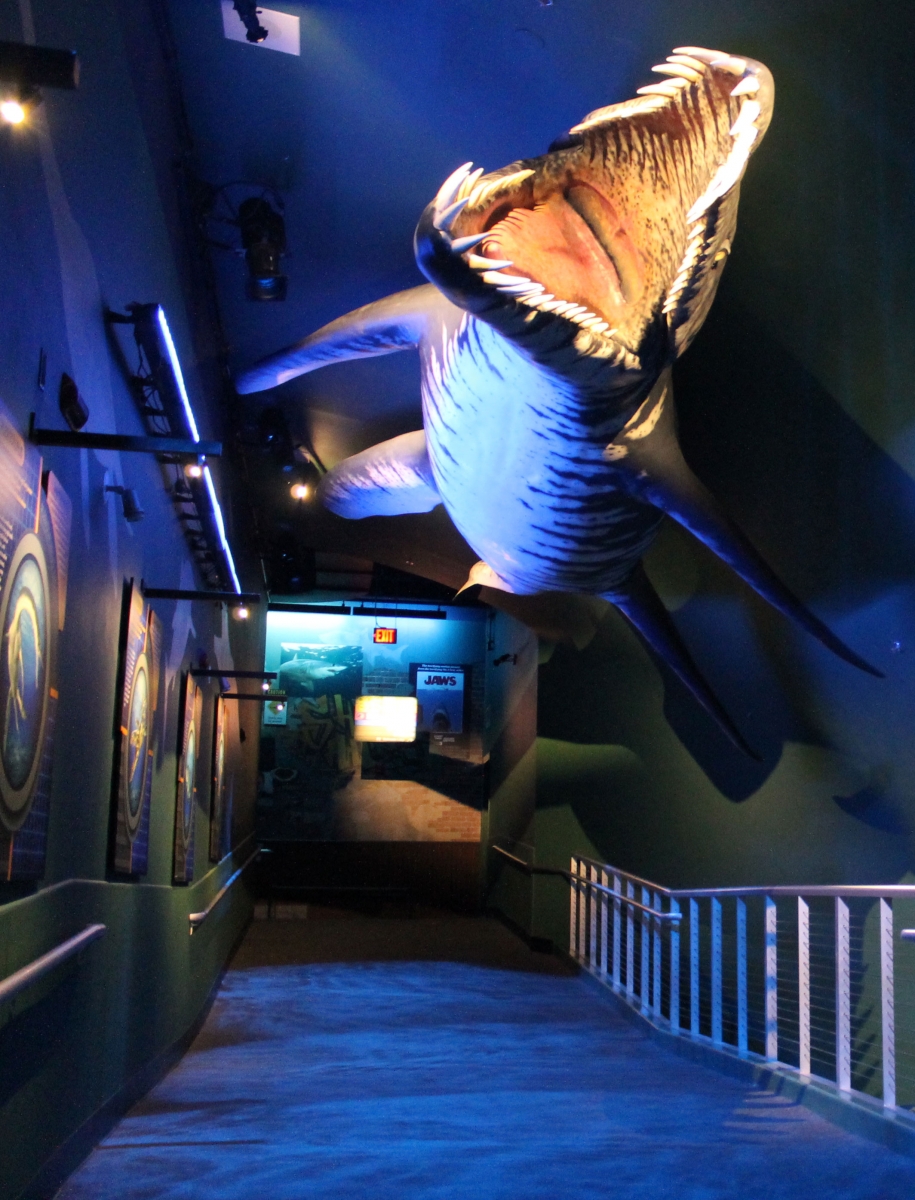 And while this exhibit only runs until July 7, the best replica there is the Liopluerodon, and he is there to stay permanently. He’s 34-foot-long, and takes up the better part of a long hallway (make sure to catch how cool it is to see the shadow of his jaws on the wall). He’s a fearsome creature (think about alligator jaws… times 10), and one of the most dangerous predators to ever have lived. They’ve gone to painstaking detail to try and figure out what he’d have looked like color-wise and they’ve “posed” him so that if you stand just so, you can take a selfie where he appears to be chomping on your head.

In this area, there’s also a lot of information on some other massive predators, and next to each block on the wall, they’ve painted an outline of what the creature would have looked like size-wise, so you can see how they stack up to each other. One of them makes “Lio” (as he is affectionately called) look practically tiny. 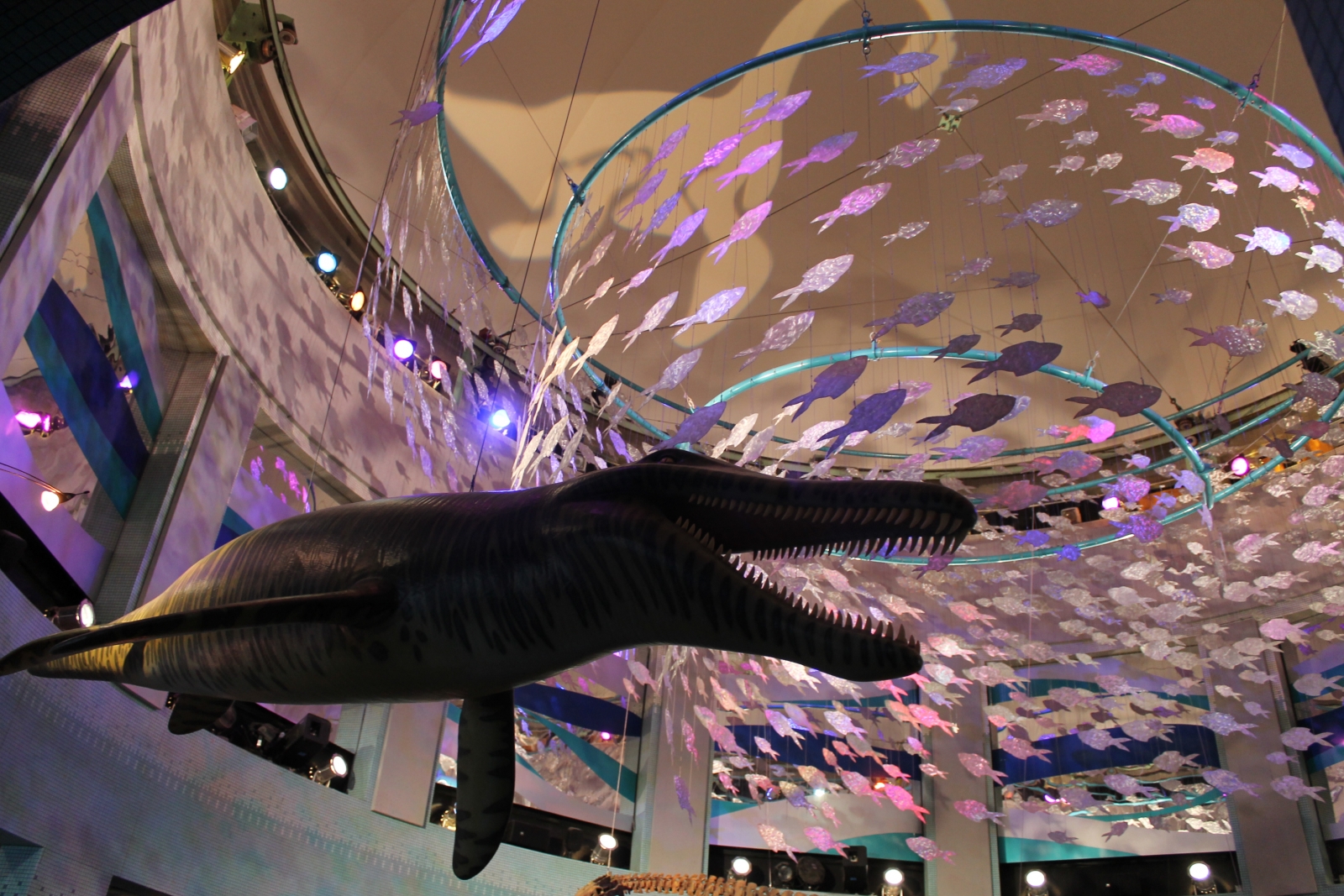 So if you’ve got a kid that is dinosaur obsessed, get them down to the Adventure Aquarium before July, so they can see all these cool underwater dinos who rarely get much attention. Though given that trailer for the new Jurassic Park movie, it looks like these monsters of the deep are about to get a whole lot more popular.