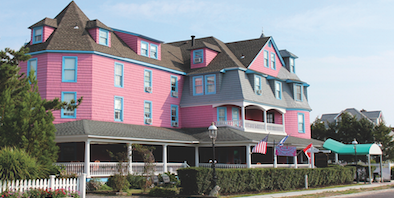 Up for getting really spooked this Halloween? We’ve got the list of the most haunted NJ (and the history to back it up) for every aspiring ghost hunter.

The Ghost of Annie’s Road

The story has a few versions. One is that after getting into a fight with her boyfriend by the side of the road after prom in the 1960s, Annie, a local high school student, was picked up by a carload of sailors and murdered. Other stories include a bride who died on her wedding night and a girl who was dragged by a truck. Known by locals for its winding sharp turns, Annie’s Road has been the site of several other fatal, real-life accidents supposedly caused by her ghost. Want to see her for yourself? Turn on some “oldies” music, pull over, turn your car lights off and glance in your rearview window. Oh yeah, and keep a lookout for the many dwarfs that are rumored to live around Annie’s Road.

The Burnt Mill Ghost of Atco

The legend of the Atco ghost centers on a young boy who ran into the street chasing after a basketball before he was lethally hit by a car. If you want to see for yourself, pull up to the dead-end road and turn around. Turn off the car’s engine and lights, get out of the car and walk away, then wait for the apparition to appear. As if this isn’t creepy enough, Burnt Mill Rd. is on the outskirts of the Pine Barrens, the very haunted home of the Jersey Devil and other ghosts.

During the Revolutionary War, a young woman named Phyllis Parker got engaged to a doctor who turned out to be a British spy. She went mad after he was executed. A hysterical Parker hid out in the library until she mysteriously dropped dead herself, in the spot she still haunts. The library has even hosted events about their resident specter before.

Back in 1811, this two-story prison housed about 40 inmates. Due to eventual overcrowding, the prison (pictured) closed its doors in 1965 (it was the oldest continually-occupied prison in the US)—but some stubborn spirits remain. Take Joel Clough, who spent his final days in the death row dungeon. After he was hanged in 1833, inmates and guards started experiencing the unexplainable. In 1999, renovations began to turn the jail into a museum, and workers reported screams, moans, disappearing tools, rattling chains and temperature changes. Don’t miss the tons of creepy artwork by former prisoners on the chipping walls of the building.

With accounts from locals warning of this hazardous five-mile stretch since the 1900s, it’s no surprise this is reportedly the most haunted roadway in America. It’s rumored this site was home to Satan worshippers, dead bodies and more dark finds. Various paranormal phenomena including the ghosts of dogs, small children, trucks and deranged hunters have been seen here. There have even been a handful of UFO sightings. After the sharp Dead Man’s Curve venture to the Ghost Boy Bridge where legend says if you toss a coin into the water a boy will toss it back.

The Dempsey House in Leonardo

Off Rte. 36 (by the bus depot) Leonardo Township

A host of urban legends are attributed to this abandoned 1890s-era pump house that was once part of the Dempsey Estate. Some locals say Mr. Dempsey went insane, killed his family and now haunts the building. Creepier still? Dempsey allegedly hanged himself from a tree following the murders—and many trick-or-treaters mistook his body for a macabre decoration. Keep an eye out for the noose Dempsey used to end his life, which some say can still be spotted swaying from a tree at night.

The traffic and blue laws aren’t the only terrifying things about Bergen County. This menacing structure was the centerpiece of the Rio Vista estate for the first half of the 20th century. The estate was split up after the owner died, so the clock tower became a site for teenage partiers, graffiti artists and delinquents. As a result, the tower was sealed up. Drive around it three times in reverse at night and turn off your headlights to see the ghost of the owner’s wife. But be careful, she might take control of your car and drive you straight into a tree. Don’t Miss: Walk six times backwards around the tower and you’ll meet the Devil himself.

This notorious oak is rumored to have been the site of Ku Klux Klan lynchings and where a local farmer hanged himself after murdering his family. Word has it anyone who attempts to cut down the tree (axe marks show many have tried) will meet an untimely death. Some say the road and land are guarded by a hellish sentinel who drives a pickup truck and who’s been known to chase visitors down the road until his headlights suddenly disappear. Visit during the winter after a snowfall. Locals say the ground around the tree is never covered in the white stuff, as it’s warmed by all the lost souls the tree has claimed.

Arguably one of the oldest ghost stories in the Northeast, the Hookerman’s apparition is supposedly the spirit of a railroad worker who lost his hand in an accident. He was known to work on the Bartley-Flanders railway line, that is until the train severed his hand, causing him to bleed to death on the side of the tracks. Legend says a mysterious ball of light can be seen hovering over the tracks at night, assumed to be the Hookerman’s lantern that he uses to look for his lost limb.

A bed and breakfast down the Jersey Shore, the Grenville has been a vacation hot spot since it opened in around 1886. Employees and guests alike recount instances of supernatural activity. The most common reports include hearing the laughter of children voices. The third floor of the hotel is the scariest, since occupants of rooms 303 and 304 often report feeling like someone is sitting at the edge of their beds.

The Lady in White

She’s one of the state’s most famous roadside specters. Legend has it that a young bride was riding in the car with her husband on their wedding night when they crashed into a tree, killing her instantly. Paranormal enthusiasts claim if you drive through the park, her white apparition will appear near the tree that ended her life. Some say you can spot her at night walking around the tree in a circle. The tree also has a big, white painted X on it, which some say was the lady’s way of warning motorists of the tricky turn that killed her before the road was rerouted away from the tree

On top of being haunted, this 1764 site has seen some serious history. It was home to the former royal governor of NJ, Ben Franklin’s illegitimate son, William. It’s the last standing proprietary governor’s mansion from the 13 colonies. The spirits of Revolutionary War soldiers supposedly still claim the property as their own, as well as those of a young boy and woman. Travelers have reported loud noises, footsteps and drawers opening. One investigator even felt someone grab at her neck, a common occurrence here.

This 1810 wool mill is known for strange occult occurrences including loud footsteps on a vacant second floor and bells that swing back and forth on their own. An apparition of a man in period clothing and a black hat has been known to tug lightly on visitors’ clothes. 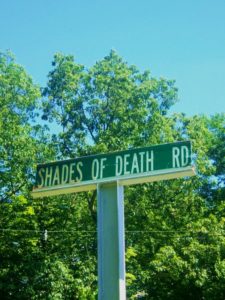 North of the Interstate 80 crossing, Allamuchy

This sinister street’s name is certainly fitting. Once home to a group of murderous bandits before the turn of the century, Shades of Death’s name comes from their violent reputation. This notorious road borders a haunted lake bed that sometimes has unexplainable pillars of mist on top of the water. Some say they’ve seen the undead walking in the fog. ​

Home base for dozens of journalists during the Lindbergh baby kidnapping of 1932, the building has retained some visitors over the years. Employees claim to see ghosts of children and hear strange singing from behind the walls. After talks of demolishing the hotel persisted for some time, it was decided the historic spot would be permanently protected in May of 2017.

Local lore claims that this spot is the burial ground for 13 witches who were found to be killing children in “Deserted Village.” They were executed and buried under Johnston Drive. Although the road has been paved multiple times, the bumps always reappear. Drivers say they can still feel the bodies of the deceased beneath them.