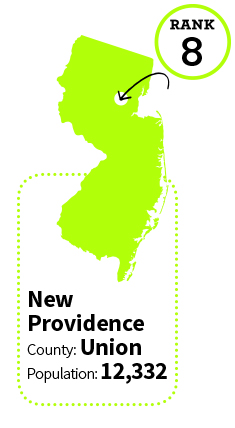 New Providence is a place where schools consistently rank amongst the state’s best, neighbors are friends, commuting is painless (especially if you’re employed by one of the Fortune 500 companies here) and recreation is a priority. With an ice skating rink, an Olympic-size pool, three parks, eight athletic fields, eight tennis courts and a community calendar dotted with fun family events like the annual Fishing Derby and Independence Day Celebration, it’s easy to see why New Providence is a great place to raise a family. The downtown area, which recently completed a $1.5 million revitalization, is filled with local independent businesses, like Barth’s Market, a third-generation German butcher, and Zita’s Homemade Ice Cream, a family-owned ice cream shop (where you can pick up NJ Ice Cream Festival’s award-winning flavors), plus popular restaurants, like the 48-year-old Prestige Diner.