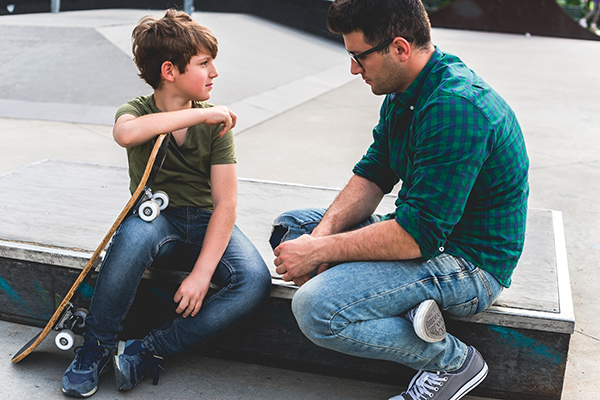 From Harvey Weinstein to Matt Lauer, bad behavior has been making headlines for months. As one respected, high-profile man after another is revealed to be guilty of sexual harassment in the workplace and beyond, we as parents are talking about how to protect and educate our kids. What are the lessons our sons and daughters should take away from it all? How do we begin to tackle such an uncomfortable and scary topic with our kids? It starts with a conversation. An awkward, but necessary, conversation.

Show of hands: Who’d rather deal with projectile vomiting than have this talk? “Find the courage to be uncomfortable,” says Janet Rosenzweig, PhD, executive director of the American Professional Society on the Abuse of Children and author of The Sex Wise Parent. “Acknowledge that it’s uncomfortable, but that it’s something you need to do.” If you’re unsure of what to say (and how to say it), consider role-playing with another grown-up to prepare for the inevitable stumpers. Also, fair is fair…everyone in the family should be uncomfortable. “Attitudes and values start at home, and it’s important that dad be involved in the conversation, too. This is especially critical when it comes to discussing respect for women,” says Christine Ferro-Saxon, LCSW, Executive Director of Family Service League/SAVE of Essex County. She also recommends that parents explore their own views on sexual harassment prior to the big talk. “Because that will come out,” she says.

Any time and place you feel comfortable having the chat is a good one—but some scenarios lend themselves to a freer flow. Bedtime is legendary for loosening up reluctant talkers (the dimmed lights ease inhibitions, and all kids love to stall), but our favorite spot boasts a captive audience—the car. “It’s a great place to have a conversation with your kids. No eye contact, and the kids can’t leave,” says Rosenzweig. Just make sure they put away the tech.

Ask a lot of questions…then listen.

You know how kids love a good lecture? Yeah, no. “Instead of a long speech, start with questions. Otherwise, you’re going to lose them,” says Ferro-Saxon. For example, ask if they’ve even heard of #MeToo. What do they think it means? What are their friends saying? Then connect it to the concept of consent and respect. “It’s important that we hear them and listen to them, [and] that their choices and preferences mean something in the world. What they feel and want and need matters, and that’s equally true for everyone on the planet,” says Rosenzweig.

Relate it to bullying.

“Bullying is a really good way to understand #MeToo, especially for young kids,” says Rosenzweig. Bring the concept home by citing media examples of abuse, then ask your kids to think about the impact their behavior has on others. Consider your own behavior and efforts to be respectful toward others. “Adults need to model the empathic behavior we expect in our kids,” she adds.

They're the bosses of their bodies.

The Girl Scouts of America recently asked parents to stop insisting their kids grant holiday hugs and kisses—even if it hurts Grandma’s feelings. “They have rights over their body. When we raise kids to think they don’t have agency, they may be more vulnerable,” says Rosenzweig.

Children need to know they can say no to anyone without feeling guilty. “My kids are always worried about hurting someone’s feelings, which makes me nervous in a harassment situation,” says Maplewood parent Jennifer McManus, mom to third and fifth grade girls. “I’ve had to talk with them about trusting their instincts and their gut, and if something feels wrong they get away, say something or come to me—even if it’s [their] friend, a friend of mine or a relative.”

Kids should never feel forced to use their bodies in a way that’s not comfortable, says Ferro-Saxon. “Children need to know that nobody touches [their] body unless [they] give permission.”

Let’s talk about the boys.

Most of the #MeToo posts are about men behaving very, very badly. It can’t feel great as a young boy to be lumped in with the maligned party, guilty by association. “You don’t want young men and boys to feel part of the problem; they’re part of the solution,” says Ferro-Saxon. Once your boys are old enough, counter peer pressure to be a “player” early on by making it clear that sex isn’t an accomplishment, but a responsibility. For example, suggest your tween consider the women in his life before texting something inappropriate. Would he be okay if someone sent that message to his sister? Drive home the point that he should respect everyone, regardless of gender or if he knows the person. It also helps to look to positive role models like male family and friends who do treat women with respect.

Age matters, and here's why.

In the state of New Jersey, children ages 13 and younger can’t legally consent to sex with anyone, while 14- to 16-year-olds are limited to a four-year gap (so a 15-year-old can consent to sex with a 19-year-old, but not a 20-year-old). But that doesn’t mean it’s a good idea for your immature freshman to date a senior. “Every teenager is unique

in [his or her] level of maturity, thus, it depends on the individuals involved,” says Ferro-Saxon. “Parents should have open and honest conversations, not lectures, with their children about their expectations when it comes to their dating [lives].”

This is also a good time to mention that parents need to check gender stereotypes and heteronormative beliefs about dating and sexuality when teaching their children about healthy relationships, Ferro-Saxon suggests. In other words, teen boys shouldn’t get high fives for having sex; teen girls shouldn’t get lectures about giving away “the milk” for free. Not to mention, LGBTQ children are often the most at risk and unsupported of all teens, so keep that in mind when discussing consent and sexuality with your kids.

Sorry, this isn’t one and done. “Make sure your kids know that if anything makes them uncomfortable and confused, you as a parent are open to talk about it. You need to make yourself comfortable enough to shut up and listen. Always ask ‘Is that it or is there more?’” says Rosenzweig. And if there’s more, make sure to listen before rushing to judgment.