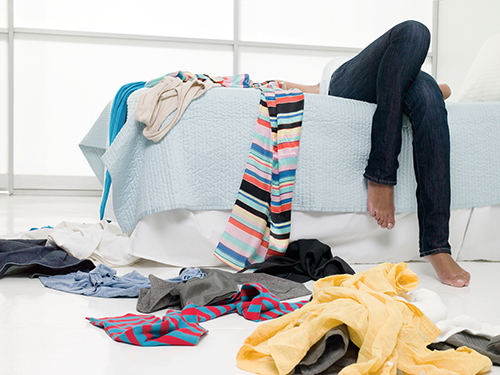 Mounds of clothes piled on the floor and falling out of open drawers, last week’s homework assignment and other random paperwork spread across the desk, empty soda cans from who-knows-when tossed near, but not in, the trash can…It’s the Ridiculously Messy Room, perhaps the truest symbol of teenager-hood there ever was.

But isn’t she supposed to know better by now?

Believe it or not, there’s a scientific reason for the madness. “It’s actually developmentally appropriate for teens to have messy rooms,” explains Dr. Steven Kairys, chair of pediatrics at the Jersey Shore University Medical Center and an adolescent specialist for the Meridian Collaborative Mental Health Project. “Tidiness requires a certain amount of cognitive control, which is still underdeveloped in the teenage brain.”

Unlike adult brains, which are ruled by the thought-driven and rational prefrontal cortex, teenage brains are highly influenced by the amygdala, the area responsible for emotional and impulsive responses.

“Eventually, the adolescent brain gives way to a more mature way of looking at the world, but teens and ‘tweens just aren’t there yet,” says Kairys.

Plus, figuring out who you are—a big growing-up goal of the teenage years—can sometimes be messy by default.

“Teens are in transition from childhood to adulthood. They’re shedding their childhood to make room for new interests that are coming in,” says organizing expert Julie Morganstern, author of Organizing From the Inside Out for Teens. “Even when adults face changes—whether moving homes or starting a new job—our old systems tend to fall apart and need restructuring.”

Help your grown-ups-in-training overcome their current developmental shortcomings by offering to work with them, not for them, on project "See the Floor Again." Here’s how:

Have a Successful “You Need to Clean” Talk

Looking for guaranteed eye rolls or to be ignored flat-out? Walk into your kid’s messy room and point out that it's a disaster—or worse, get angry about it, says Kairys. The better strategy: Wait for a stress-free time during a laid-back dinner or while you’re watching TV, and broach the subject in a non-finger-pointing way. Try: “I want to talk about your room and ways you could try to keep it a bit neater.”

Let your Teen Come Up with Solutions

Sure, his brain is scattered, but you might be surprised to hear his organizing ideas, as opposed to dictating yours. Ask him, “What are two or three things you’re willing to do?” Bonus: Giving him control makes him take ownership and pride in the project.

It’s easy for a teen (or an adult) to feel overwhelmed at the prospect of organizing an entire room, so suggest that she start with one small space like the nightstand or a drawer, suggests Stacey Agin Murray, founder of personal organizing business Organized Artistry based in Fairlawn. Like any major goal, success is best achieved when you break it down into smaller manageable tasks—and finishing those builds a sense of accomplishment and motivation to keep going. 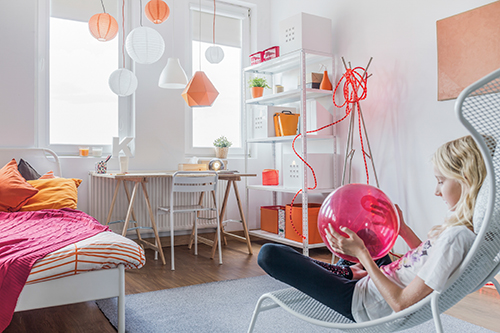 If straightening up a ridiculously messy room is the goal, try this trick: Have your teen stand in the middle of his room and imagine the numbers on a clock around the room from one through 12. Each day, have him tackle one slice at a time, starting with one to two and working around the clock, suggests Murray. Instruct him to leave a brightly colored sock where he left off so he knows where to pick up next time.

Serious disarray can also cause health problems, pests and household dangers. If your teen refuses to clean anything else, make those things the ones she must take care of—and be sure to create consequences if she doesn’t.

Understand His Connection to Childhood Stuff

Teens are caught in the purgatory between childhood and adulthood. “Be respectful of stuffed animals, trophies and other juvenile items they want to hang on to,” Murray says. “Those are part of their comfort zone.” For nostalgic items he’s mostly ready to toss (such as Lego creations, school projects and artwork), suggest he take a picture to preserve the memory.

Put Cleaning on the Calendar and Set a Time Limit

If you don’t block out the time, it’ll never get done, says Murray. Ask if she'd rather dedicate a few hours in one chunk or set aside a few hour-long time blocks. And have a reward waiting when she’s done, like ordering pizza or letting her have her pick of Netflix for the night.

Once stuff is in its place, offer a shopping trip to pick up containers for the items she needs a place for. Cool folders or dividers for her schoolwork, fun velvet hangers for the closet or a brightly colored hamper might work as incentives.

All his hard work is for naught if the next day he turns his room back into the mess it was. Ask how he’ll maintain his new system daily and throughout the year, Morganstern says. Suggest that he pick up clothes on the floor before bedtime each night, and clean out the closet of old clothes before the holidays and the start of school. The good news is that once his room is clean, he’s likely to take pride in it, so maintaining his hard work (hopefully) comes more easily. 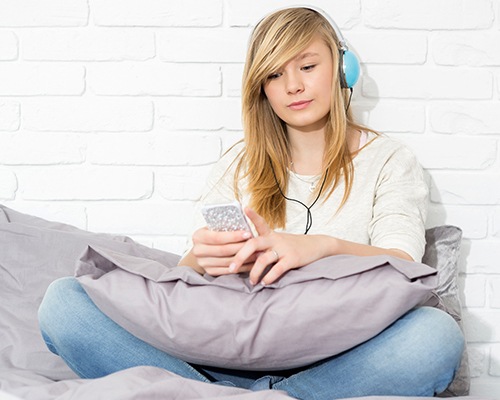 Ask your teen this question: Does the current situation work for you?

“Their room may look like a train wreck to you, but it might not to your child,” says organizing expert Julie Morganstern. “The best way to get into your teenager’s brain is to have her explain her system. Often, what looks like disorganization has more meaning than you could imagine.”

You may learn that the pile of clothes in the corner is what she’s thinking about wearing to the party on Friday, or the pictures and paperwork on her shelf are all related to camp.

“If she’s able to find what she needs and is comfortable, then sometimes it’s okay to shut the door and leave it alone,” Morganstern says. “But if she’s consistently misplacing items or you notice she typically runs late because she can’t find what she needs, then it’s time to help her come up with the right systems that work for her.”

The ultimate goal is to have her room function for her. But if it’s not broken (even if it looks that way), don’t fix it!

Nicole Yorio Jurick is a freelance writer who covers health, family and food for a variety of publications. She's also the founder of Give Peas a Chance Cooking School, which offers organic baby and toddler cooking classes.

5 Must-Have For Any Teen's Room

40 Rites of Passages for NJ Kids

How To Help Your Overstressed Teen