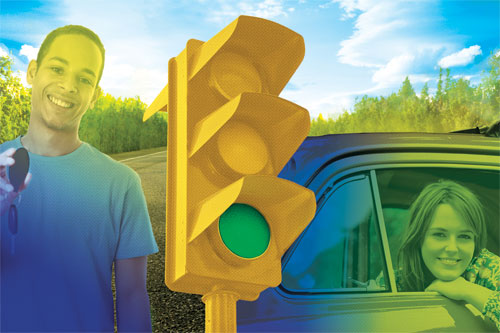 Car crashes are the number-one killer of teens. That’s a startling statistic that should concern every parent of a soon-to-be or newly licensed teen driver. I have to confess, as the mother of a 17-year-old son who has been driving solo since August, it keeps me up at night.

The good news is that NJ parents have an effective tool to address their novice drivers’ safety—graduated driver licensing (GDL). Enacted in our state in 2001, the three-phase licensing program (permit, probationary/restricted license, basic/unrestricted license) helps teens build skills while minimizing those things that cause them the greatest risk (i.e., distraction prompted by technology and their peers, driving at night, and not buckling up). Thanks to graduated driver licensing, over the past decade teen driver and teen passenger fatalities in New Jersey have been cut in half.

The key to GDL’s effectiveness is parents. Simply put, parents are the chief enforcer of the provisions outlined under the state’s program. It’s up to us to ensure that teens understand the crash risk (it’s four times higher than for any other age group on the road). We also need to make sure they know why they not only can’t but shouldn’t transport multiple passengers, drive late at night, use electronic devices, or fail to wear a seat belt. Researchers at the Insurance Institute for Highway Safety, Children’s Hospital of Philadelphia (CHOP), and the Centers for Disease Control agree these provisions should be non-negotiable because they significantly affect your teen’s safety.

In my home, we have a parent-teen agreement that clearly spells out 12 non-negotiable items, from taking no more than one passenger (my son couldn’t transport any friend for the first 60 days of licensure) and being back home before 11 pm, to no texting or talking on a cell phone behind the wheel or driving when tired.

Also, the agreement says our son pays the fine if he’s cited for a GDL or other moving violation, which also carries a parent-imposed license suspension.

The agreement, which is posted on our refrigerator, is a daily reminder of the rules that are in place not to prohibit him from driving (he drives nearly every day), but to keep him safe. So far, so good. He did have an altercation with a tree branch on the way to school one morning, but thankfully the only casualty was the passenger-side mirror.

Teens who report having parents who set clear rules and monitor their activities in a helpful, supportive way (what CHOP dubs “authoritative” parents) are half as likely to crash, 71 percent less likely to drive intoxicated, and 30 percent less likely to use a cell phone when driving. And recognizing how effective seat belts are in preventing serious injury and death in the event of a crash, these same teens are 50 percent more likely to buckle up and recognize why doing so is important.

Safe driving practices have made a positive impact ->

Despite parents’ best efforts to promote safe driving practices, we still hold our breath when our teens pull out of the driveway. (I teach a parent/teen orientation program at schools across the state and have yet to find a parent who doesn’t worry). Parents can take solace, however, knowing that police are their partners in enforcing the proven provisions set forth in the GDL program.

Some parents disagree with the requirement that a New Jersey GDL license-holder display a red, reflectorized decal on the front and rear license plates of their vehicle when driving, which is meant to aid with enforcement. The measure, prompted by a 2008 New Jersey Teen Driver Study Commission report citing the difficulty police nationwide have identifying GDL holders, is, however, cited as having a positive impact.

Known as Kyleigh’s Law, the decal requirement took effect in May 2010 and is, according to research conducted by CHOP, not only aiding with police enforcement of the GDL program, but helping to reduce crashes involving probationary drivers.

During the first year of enactment, New Jersey’s decal sparked a 14 percent increase in the rate of GDL-related citations issued to probationary drivers; the rate of police-reported crashes among the same group declined 9 percent. The study also found that multiple-vehicle crashes decreased by 8 percent and crashes where a teen was transporting his peers dropped 9 percent. But perhaps most important is the CHOP finding that an estimated 1,624 crashes involving probationary drivers were prevented.

That number is “equivalent to the number of students attending a large high school,” says Allison Curry, PhD, MPH, director of Epidemiology and Biostatistics at the Center for Injury Research and Prevention at CHOP and the decal study’s principal researcher. “New Jersey youth and other road users are safer as a result of the decals.”

Despite parents’ best efforts to promote safe driving practices, we still hold our breath when our teens pull out of the driveway.

Despite New Jersey having the nation’s first and only decal requirement, the concept is not new. Many countries, including the United Kingdom, Australia, Canada, Japan, and Germany, require novice drivers to display placards on their vehicles.

The CHOP study (which involved linking the state’s licensing and motor vehicle crash databases from January 1, 2008 through May 31, 2011, to compare monthly rates of GDL-related citations and crashes for probationary drivers in the two years before the decal took effect and in the year after) is, however, the first scientific look at the effect of the use of decals on crash rates. The findings are significant.

New Jersey already has one of the most comprehensive GDL programs in the country and also one of the lowest teen driver crash fatality rates. Even so, the state was able to achieve additional reductions in crashes with a decal provision as part of its GDL. Researchers at CHOP suggest that states with higher teen crash rates than New Jersey might realize even greater gains from including decal provisions as part of their GDL programs because they have more room for improvement.

It’s important to note, though, that the decal has its detractors. Some parents worry that child predators will use it to identify and then follow teens on the road, while others suggest it will prompt profiling by police. However, these concerns have not been substantiated by the experience of other countries, many of which have required decals for decades. Additionally, a report released by the New Jersey Division of Criminal Justice in April 2011 found teen safety has not been jeopardized. And despite attempts to test the decal’s constitutionality, the NJ Supreme Court ruled in a 6-0 decision last summer that Kyleigh’s Law is not an invasion of privacy, nor does it make young drivers more vulnerable to predators.

Australia’s response to the decal backlash in New Jersey has been one of surprise, says Ian Faulks, a psychologist and transportation safety and policy expert who has done extensive work in teen driver safety. In discussions with Australian parents and teens [the latter are required to display L (learner's permit) and P (intermediate license holders)placards on their vehicles], the sentiment is that “the plates (decals) are meant to be visible to other drivers to show that [teens] may be more likely to hesitate or make a mistake driving.” And, according to Faulk, one teen he'd interviewed innocently asked, “How else will police know that we have license restrictions if we don’t have red P-plates?”

CHOP plans to continue to study the decal’s impact in New Jersey. In the meantime, CHOP researcher Curry offers the following advice to parents: “Use GDL as a guide to keep your young drivers safe. This means starting them out in low-risk conditions—keep the number of passengers to no more than one, limit nighttime driving to before 10 pm, always prohibit cell phone use while driving, and insist on seat belts for every occupant on every drive.” Easy enough?

Recognizing that that the teen years are the most dangerous driving years, and leveraging the proven provisions of New Jersey’s GDL program—including the decal—is good advice that every parent should take to heart.

Long Valley resident Pam Fischer is leader of the NJ Teen Safe Driving Coalition, a partnership of The Allstate Foundation and the National Safety Council. She served as director of the NJ Division of Highway Traffic Safety from 2007–2010 and chaired the NJ Teen Driver Study Commission.