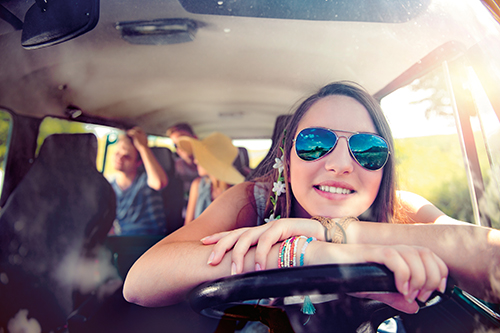 The driving age is whatever you say it is.

Just because New Jersey says your 17-year-old’s suddenly road-ready doesn’t make it true. If you want him to have another six months of supervised permit driving, that’s your choice. Don’t give into pressure from your teen or other parents. You decide when he’s ready, and it may not magically happen the moment he turns 17.

Your teen may get into an accident soon.

Sadly, motor vehicle accidents are the leading cause of death for teens ages 16 to 20 in NJ. And one in every five 16-year-olds in the US gets into a crash, so make sure you get a car with high safety ratings. Start by going to the Insurance Institute for Highway Safety (iihs.org) for tips on how to find a safe car for your teen. Better yet, have your new driver share a family car. Statistics show adolescents who share a car are far less likely to get into an accident than those with their own wheels.

When he gets in an accident, he won’t know what to do.

Make sure to walk him through what to do in an emergency. Even a minor fender bender is likely to freak him out,  so rehearse what to do, who to call  and what to say if  he gets in a crash.  Put a checklist in the glove compartment just in case.

The car will tell you things your teen won’t.

Keep a spare set of keys and check the car’s “hiding places” frequently.  And no, that’s not “dried oregano for a recipe” in that baggie, no matter how much she protests.

Many veteran parents say creating a driving contract was one of the best parenting decisions they ’ve ever made. Include all the safety rules you’ve set together, like keeping phones stowed in backpacks and making sure they stick to the rule of only having one passenger in the car for the first year (this is NJ law). Ensure they take care of their car by removing trash from the car floor or keeping a shared car full of gas. Make sure to list the consequences if the rules are broken. Need inspiration? Download our contract at njfamily.com/drivingcontract.

Ban anything that might take her attention away from the road.

Thirty-four percent of  16- and 17-year-olds admit they’ve sent and responded to text messages while driving. Be specific about what’s not permitted, including the penalties for breaking these rule (consider taking away her phone or limiting her driving to school and work only). This includes talking on a cellphone, texting, checking social media, eating, applying make-up or fiddling with the radio.

Make sure he gets enough sleep before getting behind the wheel.

Drowsy driving causes thousands of teen crashes each year, so if your teen is staying up late to cram for an exam, be sure to drive him to school the next morning.

Only let your teen drive during the day for at least the first six months.

According to the Motor Vehicle Commission, teen crash rates are three times higher after 9 pm. Impose your own addendums to the Graduated Driver’s License (GDL)  rules. His curfew may be 11 pm legally, but in your house, make the rule that he has to be back right after track practice.

Keep tabs on her with apps.

Download safety apps that help you locate your teen or keep her off her phone while driving. Try Cellcontrol—an app that disables texting and emailing on all cellphones while the car is in motion. Or the SafeDrive app, that sends you texts about where she is and when she exceeds speed limits.

Teach him to fix a flat before he’s allowed to drive.

Car emergency services are great, but what if your new driver’s on a stretch of road with no cell service?  Or AAA tells him it’s going to be a three-hour wait? There will be times when a driver needs to be able to fix a flat by himself.

Mean what you say.

One of the toughest things about having a new driver is following through on the consequences you’ve established. Driving your kid to swim practice every morning because she skipped curfew isn’t anyone’s idea of a good time, but she broke a rule and now she has to deal with the repercussions. (And so do you. Ugh).

What To Do if Your Teen is Dating an Older Guy

20 Things I Wish I'd Known Before College