Adam Sandler’s Quarantine Song Is What We All Need

A bloody three-day battle on July 1-3, 1863 in Gettysburg, PA put this town on the map. It’s now home to Confederate ghosts, plenty of comfort food, wineries, cideries, breweries and distilleries and, of course, tons of Civil War history. 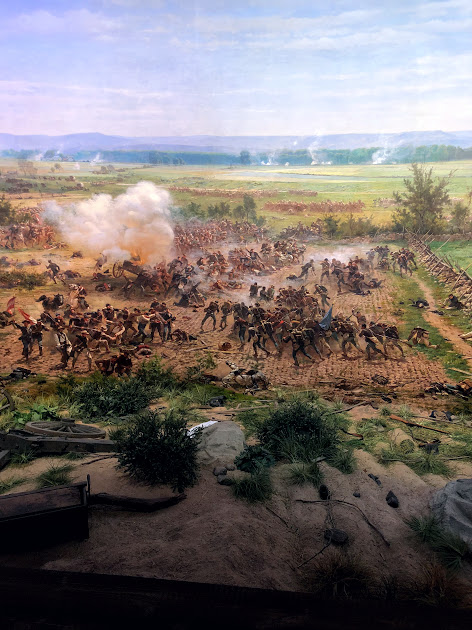 Let’s start with the obvious: Your visit to this town isn’t complete without a firsthand look at the battle. Even if military history isn’t your thing (or you think it won’t be the kids’ thing), the museum and visitor center have plenty to keep the whole family engaged. See artifacts like rifles and uniforms, learn how both soldiers and civilians lived, browse 12 galleries featuring relics and interactive presentations and shop local goodies in the gift shop. Make time to hear Lincoln’s Gettysburg Address at a screening of A New Birth of Freedom in the theater. More interested in the battlefields? Take a horse-drawn carriage tour of the fields, monuments, cannons and more guided by a local expert.

Pro-Tip: If you have time for just one thing on your itinerary, make it the cyclorama painting of Pickett’s Charge, painted by Paul Philippoteaux in the late 1880s. The realistic oil piece—377 feet in circumference and 42 feet in height—comes to life with audio monologues, lights and sound effects, immersing guests in the warfare depicted. 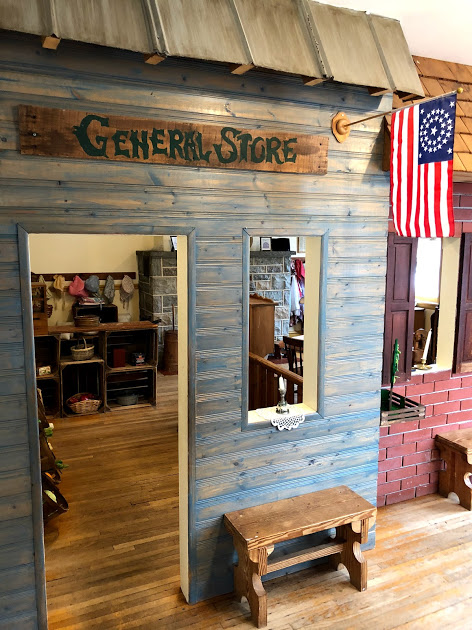 This hands-on spot has room after room of fun—minus screens and gadgets. The 1860s vintage home has been totally transformed into a kiddie paradise. The little ones can play make believe in the 1860s room, decorated like a Civil War house (there’s even a general store!), craft away in the art studio, get to work in The Construction Zone, complete with a hard hat area and business office, visit with the resident “class pets” in the Nature section and experiment with magnets, colors and more in the Explore room. And beware: there’s an epic toy store in the front of the museum that you’ll see upon entering and exiting.

Pro-Tip: Your kids will have such a blast standing inside a bubble. Use the pulley to lift the hula hoop up out of a kiddie pool filled with liquid bubbles while your little one stands in the center of the pool. Make sure they blow at the bubble wall from the inside! 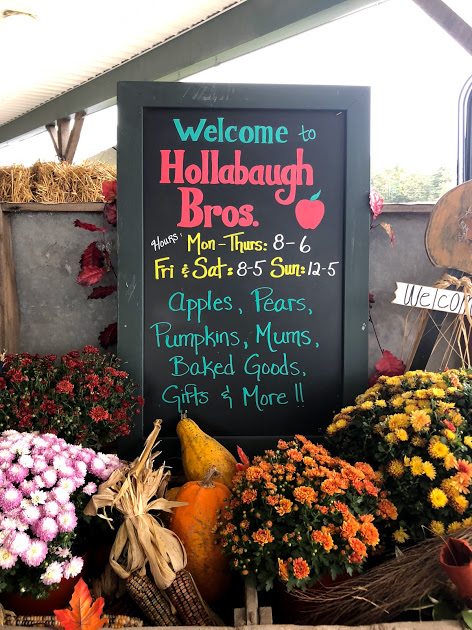 While seasonal produce like apples, peaches, pumpkins, blueberries and corn are the cornerstone of Hollabaugh, the bakery is chock-full of homemade goodies like apple cider donuts (trust us, they’re next-level), pies, sticky buns jam, ice cream and bread. The spot also runs a CSA, holiday events like gingerbread decorating, cooking classes and produce festivals throughout the year.

Pro-Tip: The apple cider donuts are a crowd favorite, but the molasses cookies blew us away. With a brown sugar-y decadence, the perfect balance of crunch and chew and a hefty layer of sugar crystals, you’ll want a glass of milk for these babies. 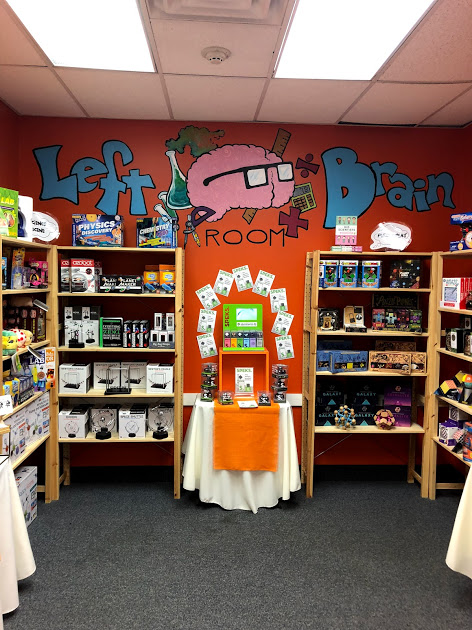 Shop board games, tech accessories, unique gifts, gamer merch and more. There’s also no shortage of STEM fun to be had, or old school arcade games (don’t miss Pac-Man at the front of the shop!). Hit the Left Brain section of the store for Rubik’s cube-inspired trinkets and the Right Brain section for word activities and DIY projects. Don’t miss the Game Vault, home to tons of board and card games including Catan, PicWits and all things Star Wars. The shop also sponsors tournaments and competitions in everything from Dungeons & Dragons to Super Smash Bros.

Pro-Tip: If you have a budding entrepreneur in your fam, don’t skip this spot: it’s run and managed completely by local area teens! They’ve spearheaded every aspect of the business from finances to social media.

A TWIST ON HISTORY 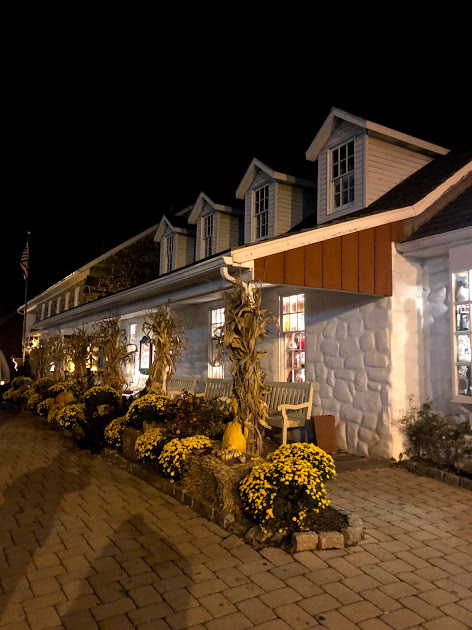 After three days of war, Gettysburg quickly became home to thousands of dead soldiers. It’s no surprise that ghost tours and hunts are a huge tourist draw for the town. Gettysburg Ghost Tours, run by the Gettysburg Paranormal Association, takes believers around town while a knowledgeable guide recounts famous local legends (plus some hometown secrets). The Black Cat tour takes guests to old alleyways, former grave sites and houses-turned-museums. The East Cemetery Hill tour passes the Jennie Wade House (she was the first civilian to be killed in the Civil War), two local cemeteries and a notoriously haunted orphanage where children were tortured by a malicious woman who still lingers on the premises.

Pro-Tip: The Black Cat Tour gets you exclusive access to the Haunted Creek Bed (the company owns the bordering private lot) at Winebrenner Run, the last above-ground portion standing of the original creekbed. 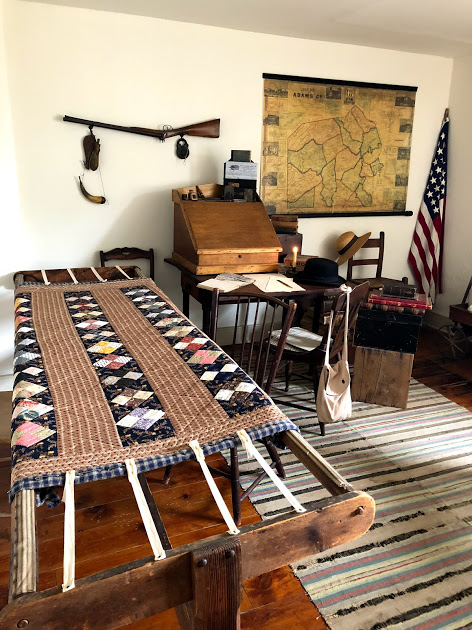 The kids have heard all about the soldiers of the Civil War, but what about the civilians? Visit the former home of George Shriver, his wife and two daughters to get a first-hand look at how a wealthy family lived in the 1860s. You’ll even get to see the never-opened Shriver’s Saloon and Ten-Pin Alley in the cellar. You’ll also get to see where a makeshift operating table (aka an unhinged door!) was placed to perform surgeries and amputations for Confederate soldiers who occupied the Shriver house while George was off at war and the wife and kids sought refuge in the countryside. The most shocking spot of the house might be the attic, where Confederates set up a sharpshooters nest (at least two of them perished there, but the house is ghost-free).

Pro-Tip: On your way out, take a look at the side of the house in the first alleyway of the property (leading to the backyard garden). The stone is littered with original bullet holes from the battle.

FUN WITHOUT THE KIDS 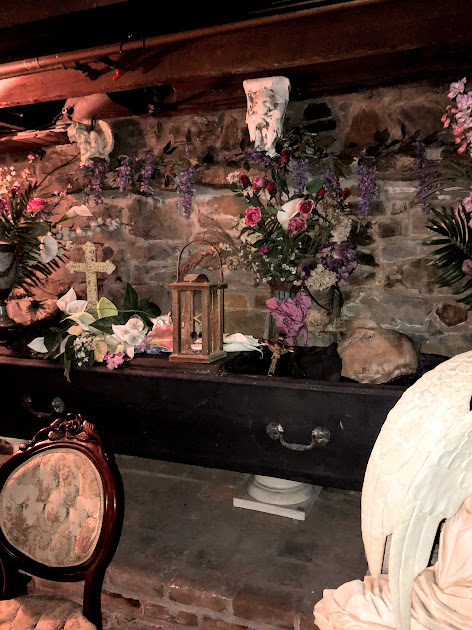 This bed and breakfast is also home to ghost tours, paranormal hunts, a tasty tavern and restaurant and tons of history. Stay in the haunted inn and you just might get an unexpected visitor at the foot of your bed. Go for dinner in the Meade or Lee Dining Room for local staples like Pennsylvania Dutch Chicken Pot Pie, or Confederate throwbacks like the Georgia fave, Goober Pea Soup (that means peanut). There’s also a quaint beer garden outside and Sweney’s Tavern in the back of the house. Go for a tour of this famous inn and learn its role in the Battle of Gettysburg, or brave a ghost hunt or tour in the Victorian-style Mourning Theater.

Pro-Tip: On the hunt for dessert? Sweney’s Tavern has shoo-fly pie, a Pennsylvania Dutch highlight made with molasses. Ask your server for it hot (it’ll remind you of a brown sugar cinnamon Pop-Tart). 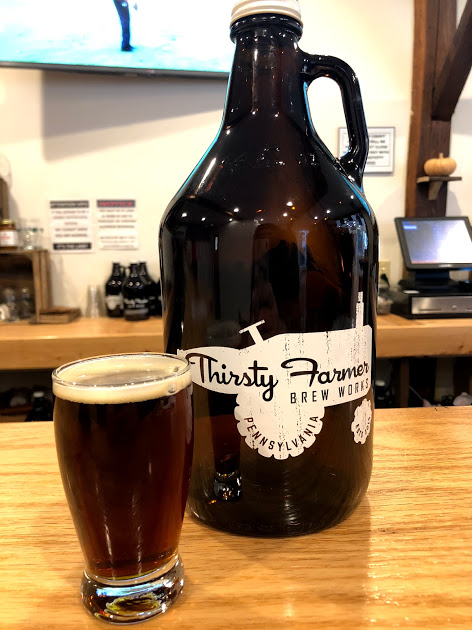 Grab a passport and hit the region’s many vineyards, tasting rooms, cideries and distilleries. While you get your fill of beer, wine, cider and more, collect stamps from each spot you visit for a shot at prizes like coasters, a tote bag and even a getaway to Gettysburg (that’s the grand prize, so you’ll need 22 stamps for a shot at that one). If you’re craving a cocktail, Mason Dixon Distillery makes a mean whiskey sour with housemade whiskey and real egg white (not to mention an epic lunch!). Winos won’t want to skip Adams County Winery, where much more than grapes are used in their line of vino (Black Magic, made with PA blackberries, blew us away), and Hauser Estate Winery, where you can get flights of not only wine, but also Jack’s Hard Cider. If you’re into farm to table indulgence, Thirsty Farmer Brew Works grows its hops on premise. Tattered Flag Brewery & Still Works’ Taproom downtown is a no-frills spot boasting big flavor and rotating taps (not to mention shots of homemade liquor).

Pro-Tip: Adams County Winery has lawn games outside, so if the weather’s right you and your crew can try your hand at cornhole. 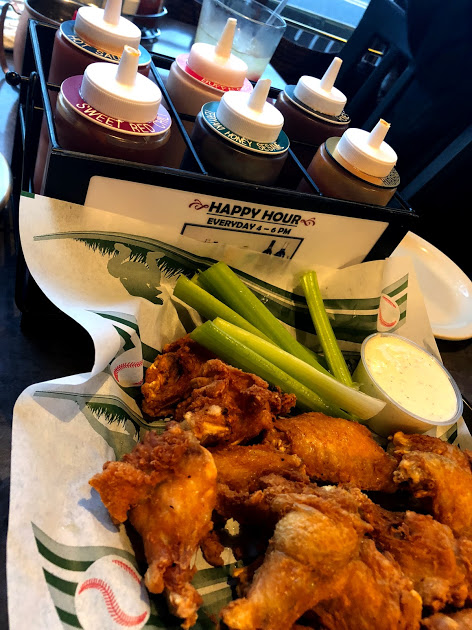 Dinner with the Kids: Gettysburg Eddie’s

This resto has a huge menu with items even picky eaters will like. Budding sluggers can learn about the spot’s namesake, Eddie Plank, who was in the MLB in the early 20th century. Watch the game on one of seven big TVs after ordering some ballgame fare. The pulled beef hoagie with coleslaw will fill up any little leaguer, while seasonal cocktails like an apple cider mule will hit the spot. 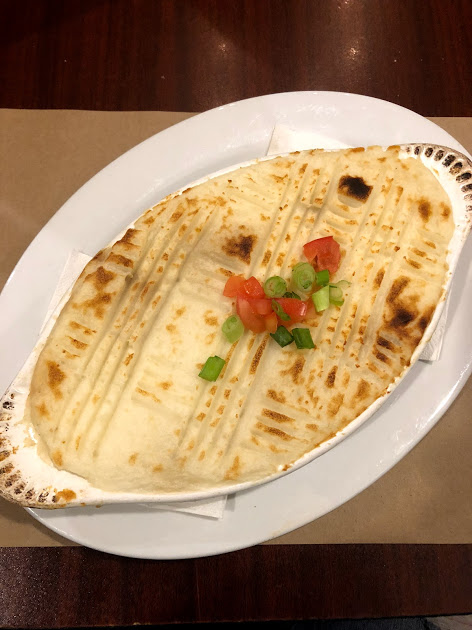 Treat yourself to a selection of 100+ Irish whiskeys, Irish brews and authentic fare at this old-school inspired pub. Two beer taps are reserved for a house beer and house cider unique to the pub: Stubborn Irish Prig Porter and Johnny Jump Up Hard Cider. Standard entrees include Bangers and Mash (Guinness and onion sausages, red mashed potatoes, sauteed onions and house gravy), Dublin Fish and Chips (10 oz. Yuengling-battered haddock with fries, tartar sauce and lemon) and Guinness Beef Stew (beef marinated in Guinness with carrots and onions slow cooked in a rich sauce and served with house soda bread).

Don’t Miss: The Shepherds Pie. Made according to a signature family recipe that originated in County Armagh, Ireland, it’s loaded with tender ground beef and traditional veggies in brown gravy, then topped with browned mashed potato. 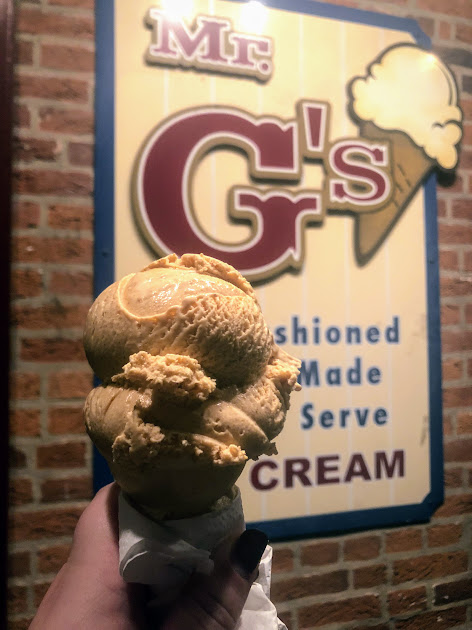 You’ll want to plan a visit to this sharpshooters HQ-turned-ice cream parlor (rumor has it Confederate ghosts linger in the surrounding green by the shop!). Flavors are constantly rotating and incorporating local produce and seasonal inspo, but faves include pumpkin, peppermint patty, fresh peach, salted caramel, coffee Oreo and orange pineapple.

Don’t Miss: The famous waffle cones! These sweet treats are whipped up before your eyes. 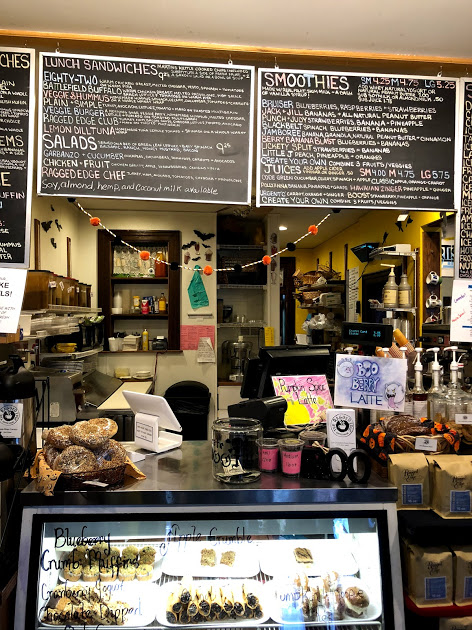 Along with artisanal coffee, Ragged Edge also has a selection of sandwiches (like the Eighty-Two, warm chicken breast, melted cheddar, pesto, spinach and tomatoes on pita) and a wide range of smoothies and juices (take the Bruiser, blueberries, raspberries, strawberries, skim milk and vanilla syrup), plus pastries like blueberry crumb muffins and whoopie pies.

Don’t Miss: The house chai and sticky buns are an autumnal match made in heaven. 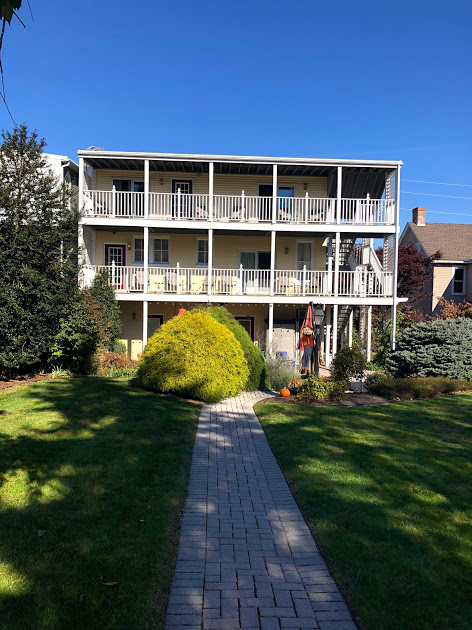 Just a few minutes (walking!) away from the heart of Gettysburg, this cozy bed and breakfast provides the perfect combo of privacy and hospitality. The home, built in 1872, has nine rooms that include on-site parking, private baths, televisions and WiFi—some rooms have balconies and/or fireplaces. Guests can warm up in the downstairs sitting rooms or chill out on one of three porches overlooking the backyard garden. Your stay comes with a three-course breakfast (we savored strawberry smoothies, sausage and creme brulee French toast).

Pro-Tip: Grab a bite of whatever surprise sweet treat from the stocked snack bar; it won’t disappoint.