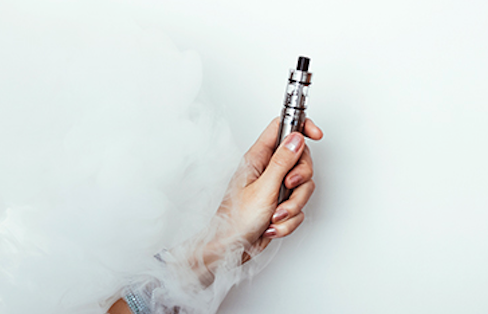 Electronic cigarettes may not smolder or smell, but their popularity among middle and high school kids definitely stinks. Designed to deliver tobacco-free hits of nicotine to smokers trying to quit, e-cigs have found an unintended but now passionate market among teens in search of a tasty buzz.

No school is immune to the dangerous trend. “It’s happening at Millburn. It’s happening everywhere,” says William Miron, principal at Millburn Senior High School. Experts say high-achieving, stressed teens seem especially drawn to nicotine’s effect, making the habit pervasive throughout NJ middle and high schools. We asked those experts to give us the lowdown on how vapes work, how kids buy them and how dangerous they really are.

In short, it’s inhaling the vapor produced by heating an e-liquid (or e-juice) in some sort of delivery system. The liquid is typically nicotine (though not always) mixed with chemicals and minty or fruity flavorings (like gummy bear and cotton candy). Personal delivery devices look less like smoking paraphernalia and more like elegant pens and unassuming flash drives that can be tricked out with stickers, skins and other flair.

Because their vapors are essentially odorless and invisible, kids are finding it easy to pull hits wherever—at their lockers, in the school bathroom or even in class when their teachers’ backs are turned. Juul, the e-cigarette brand that so powerfully dominates the youth market it’s become a verb, uses proprietary e-liquid pods in a sleek piece of tech that recharges via USB port. It’s effortless, stylish and super stealthy—catnip to tweens and teens.

HOW ARE KIDS GETTING IT?

It’s not that hard, despite the fact that it’s illegal in New Jersey to sell tobacco and vaping products to anyone under 21. The law, passed last November, raised the age from 18 (one of only three states to do so) in an effort to thwart the growth of nicotine use among teens. “Kids know what stores other teens are getting them from and which stores aren’t checking IDs. And students who do get their hands on the pods sell or trade with their friends,” says Cathy Butler- Witt with Southern New Jersey Perinatal Cooperative. Her organization operates the grant-funded educational program Don’t Get Vaped In (dontgetvapedin.com). The new law may make it harder for teens to find older friends or siblings willing and able to purchase vaping supplies, but it’s still relatively easy to buy online (the feds are looking to crack down). Intrepid NJ teens can also make a run for the Pennsylvania border, where prices are lower and the minimum age is still 18.

HOW COMMON IS VAPING?

“Kids are using it,” says Olivia A. Wackowski, PhD, assistant professor at Rutgers School of Public Health. And e-cigs are far more popular among teens than tobacco products. The Center for Disease Control’s (CDC) National Youth Tobacco Survey reported that almost 12 percent of teens had used e-cigs in the past 30 days,

but only around 2 percent had used them frequently (20 out of 30 days in the past month). While that doesn’t sound terrible, what’s unclear is how teens actually define vaping. According to Butler-Witt, Juul has more than 68 percent of the e-cigarette market share. Ask teens if they vape and they may say no. Ask if they Juul and, well, they’ll probably lie. But if they were telling the truth, they may say yes. “We really need to be asking the right question,” says Butler-Witt.“You need to speak the same language.” Not to mention, the CDC survey was conducted more than a year ago—if you have a teen (or were a teen), you know how fast and furiously trends can blow up.

FDA Commissioner Scott Gottlieb, MD, recently declared war on the industry. Mincing no words in an FDA statement released on September 12, Gottlieb called e-cigarette usage among teens a ubiquitous and dangerous trend that’s reached epidemic proportions, while also handily smacking down those who tout e-cig usage as a blessing to smokers giving up their Marlboros. “The disturbing and accelerating trajectory of use we’re seeing in youth, and the resulting path to addiction, must end,” says Gottlieb. “The FDA won’t tolerate a whole generation of young people becoming addicted to nicotine as a trade-off for enabling adults to have unfettered access to the same products.” So, along with blitzes targeting retailers selling products to minors, the FDA has given manufacturers including Juul, MarkTen, Vuse, Blu and Logic (which control 97 percent of the e-cigarette market) 60 days to address their popularity among minors or face the FDA’s wrath.

WHAT ARE THE HEALTH RISKS?

“The kids know it’s not good for them, but they think it’s better than cigarettes,” says Miron. And while it’s true that e-cigarettes have fewer toxins and carcinogens than tobacco-based products, they’re still there. “We don’t know how harmful they are, or what some of the long-term risks are,” says Wackowski, noting that these relatively new products aren’t highly regulated, ingredients vary from brand to brand and exposure can depend on the device setting. And what about those yummy pod flavorings, oft touted for their FDA approval (which means they’re safe to eat)? “It doesn’t mean they’re safe to inhale, especially among chronic users,” she says. The toxins aren’t even the worst of it: “For young people, nicotine exposure can potentially harm brain development. The additive nature can start to change the brain chemistry,” she says. “There’s no reason for young people to be using these products. They’re not toys. And we don’t know all the potential risks yet.”

DOES VAPING LEAD TO SMOKING?

Teens who vape are four times more likely to use combustible cigarettes, says Butler-Witt. “It’s a gateway into traditional tobacco products.” But it’s a chicken and egg thing. It’s true that young people who dabble with e-cigs are more likely to light up old-school. However, risk takers take all sorts of chances. “It’s hard to know if it’s the products leading to use or it’s the person,” says Wackowski. “People who experiment with things tend to experiment with things. It tends to co-occur with trying other products as well.” You can take comfort in the fact that overall tobacco usage is low right now—time will tell whether e-cig use leads to a significant rise.

WHAT ARE SCHOOLS DOING TO STOP IT?

They’re trying. “We take a multifaceted approach, but it’s a difficult situation right now,” says Miron. Devices are hard to spot at a glance: the vapor is barely detectable and teens are wily. “Talking with other principals, we all hear stories that kids are able to vape in the back of a room and teachers aren’t able to detect it,” he says. For some kids, getting away with it is half the fun. Since students commonly vape in bathrooms, schools have been trying everything from installing vapor detectors and restroom monitors to removing main doors and limiting bathroom usage at certain times.

Vaping devices can be used for pulling more than nicotine (think THC oil and cannabis products), so numerous NJ schools now require students caught vaping to get mandatory drug screenings. Educating adults and students using assemblies, handouts and websites is also key. “We’re trying to address it and get the message out,” says Miron.

WHAT CAN PARENTS DO?

“You can’t just wag your finger and say it’s not safe. You need to come from your child’s perspective,” says Butler-Witt, noting that facts are the best counters to socialization and peer pressure. For example, it’s often said that Juul flavorings are FDA approved, and they are—for ingesting, not inhaling. Not just that, 63 percent of young Juulers don’t even know the product contains nicotine, she says.

Along with lack of knowledge among kids, there’s also a glut of misinformation promoted by the vaping industry which has a vested interest in touting its benefits as alternatives to tobacco. For accurate info, stick with legit sources like the CDC and FDA and ignore any that downplay evidence. Having a conversation with your kids is the best way to be proactive and deal with problems. “Make sure you, as a parent, know the facts. Use the same terms as your kids. Talk to them in a non-accusatory manner. Educate them,” she says. Parents also have to do as they say and check their own bad habits. “Be an example by not using the products either,” Butler- Witt says. No matter how much you may like the taste of gummy bears.

8 SIGNS YOUR CHILD MAY BE VAPING

• You detect a sticky-sweet scent

• A weird looking USB drive or pen is always in reach

• Agitation or irritability (if they can’t get their fix)

• Dry-mouth and nosebleeds caused by dehydration

• Mouth sores and a smoker’s cough