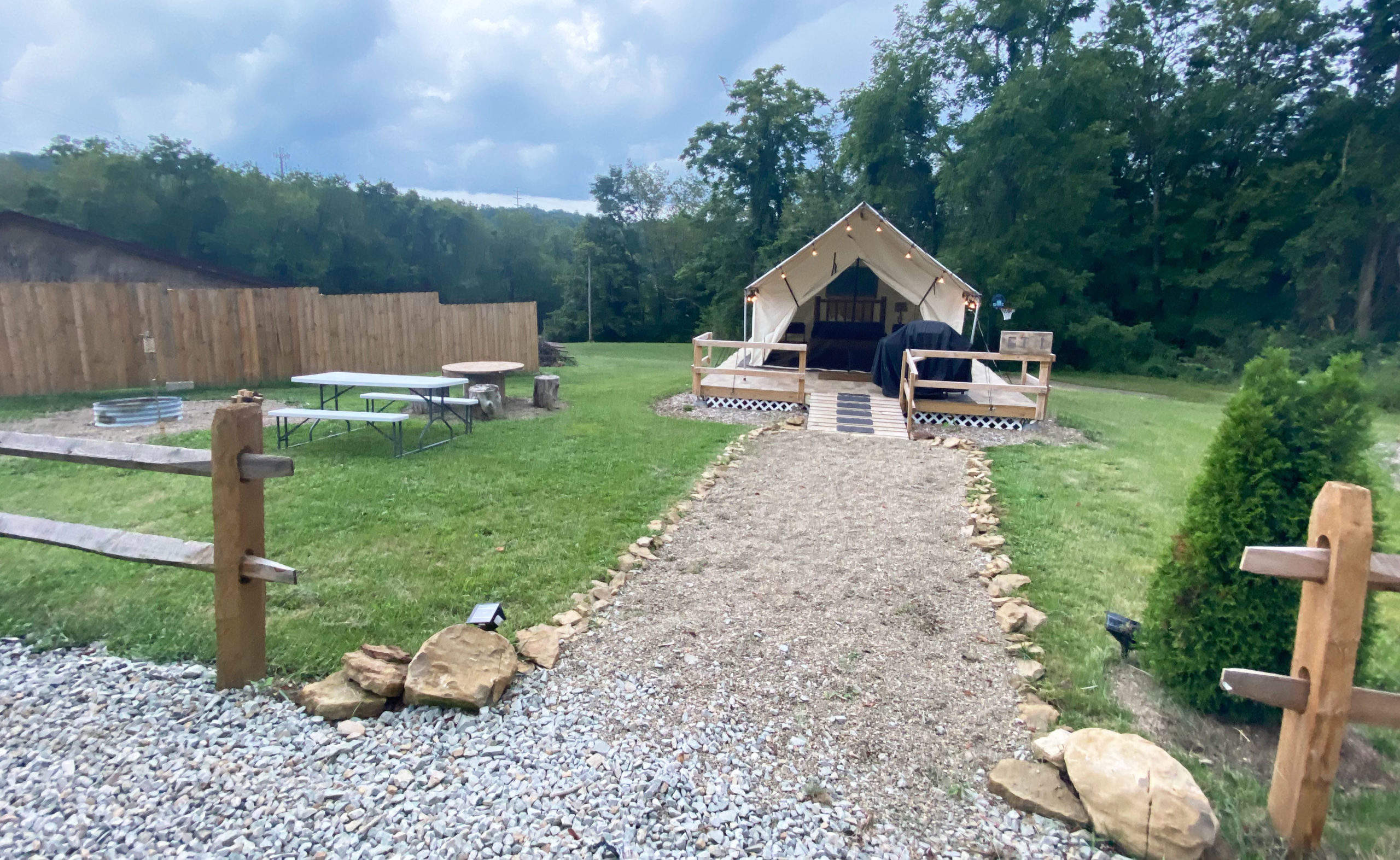 Do you love the rugged outdoorsy pics friends post from their camping trips, but hate the idea of family camping in the cold or rain or the idea of having to pitch your own tent? Here’s why glamping might be the getaway you’ve been looking for:

This summer I went to a KOA in Western Pennsylvania, specifically the Washington Pittsburgh SW KOA Journey, (KOA has locations all around the country including one in South Jersey) and the campground had a variety of camping options to suit your family’s needs. There are traditional campsites, RV hook-up sites (these were super packed when I went), cabins and a few new glamping tents.

I was tempted to pick a cabin for my woodsy adventure since it was equipped with running water, electricity and indoor plumbing, but I personally wanted a little bit of that true camping experience.  I picked a glamping tent instead. Before this trip, I had never truly enjoyed my camping adventures but this one was magical for so many reasons. While not every glamping tent is exactly the same (each KOA operates slightly differently), the experience will be somewhat similar. Here are a few things you need to know before you book your adventure. 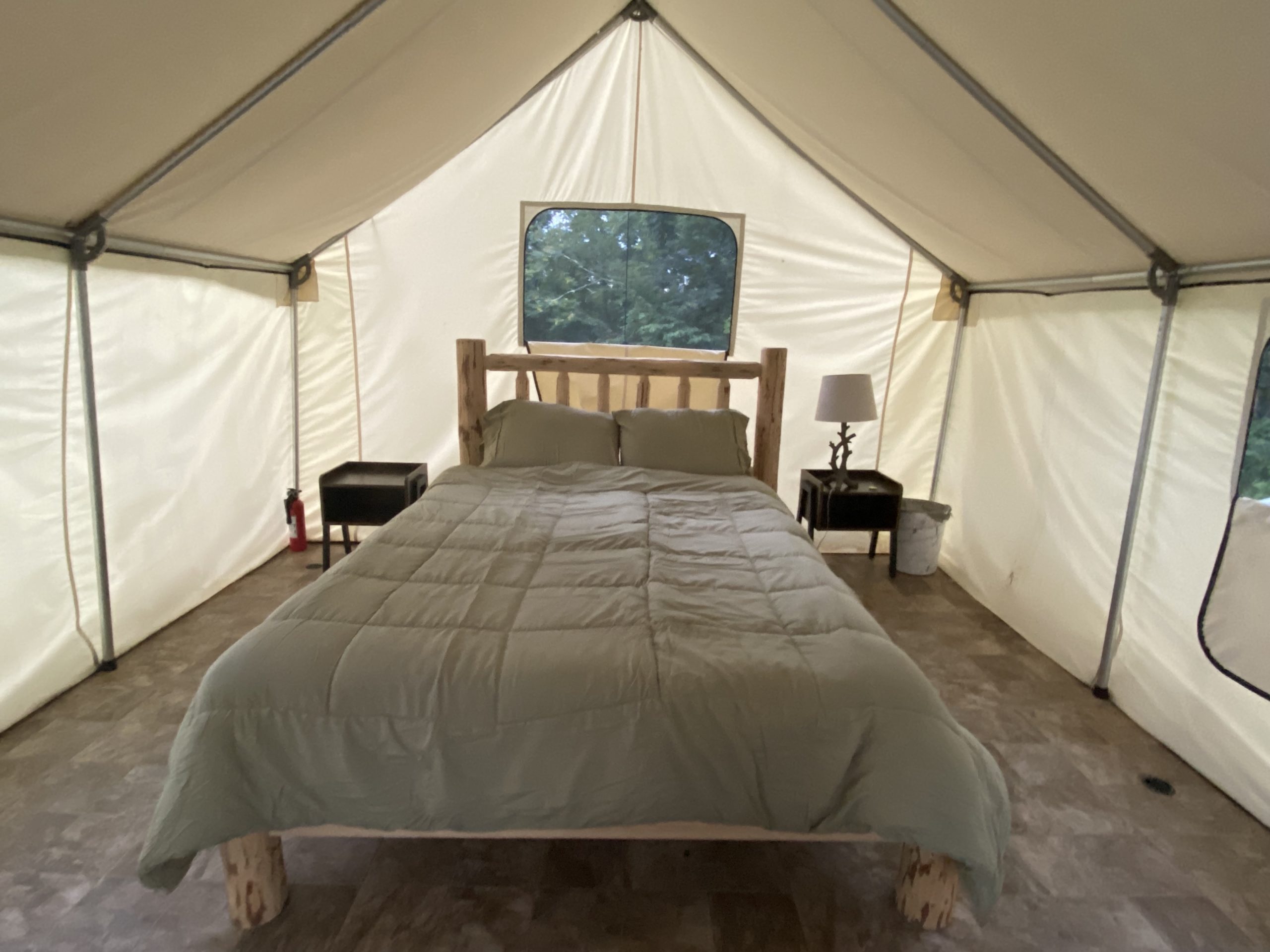 You don’t have to own a tent. Glamping tents are permanent structures that are very sturdy. The one I stayed in had a large metal frame on the inside supporting the tented sides and was built on top of a raised platform.

There’s no plumbing, but there is heat and air-conditioning! Unless you’re very lucky, most glamping tents don’t have plumbing, but they do have air conditioners and space heaters quite often, which means that in the midst of the hot summer, or in the crisp early fall into November and in the early spring, you can stay comfy in your temperature-controlled oasis.

You don’t have to worry about sleeping on the ground or spend time fighting with an air mattress. Since these tents are built on raised platforms, you won’t have to worry about a rock poking into your back all night. And they have beds. Real beds inside. Some require you to bring your own bedding, and other locations will supply your bedding, but the bed and mattress are a nice and comfortable way to enjoy the great outdoors. So leave that air mattress and pump at home. The tent I stayed in had one large bed, but the neighboring glamping site was a larger tent, almost double the size with more of a sleeping area for a bigger family.

You’ll have electricity. You might have to walk a few yards to a communal bathroom (the KOA I stayed at was nice and had showers) but if the kids are having trouble with the idea of totally unplugging, or you want to be able to watch a movie, there are outlets to charge your devices and such on. Which means there are also lamps and lighting inside and you won’t have to worry about flashlights in the dark. 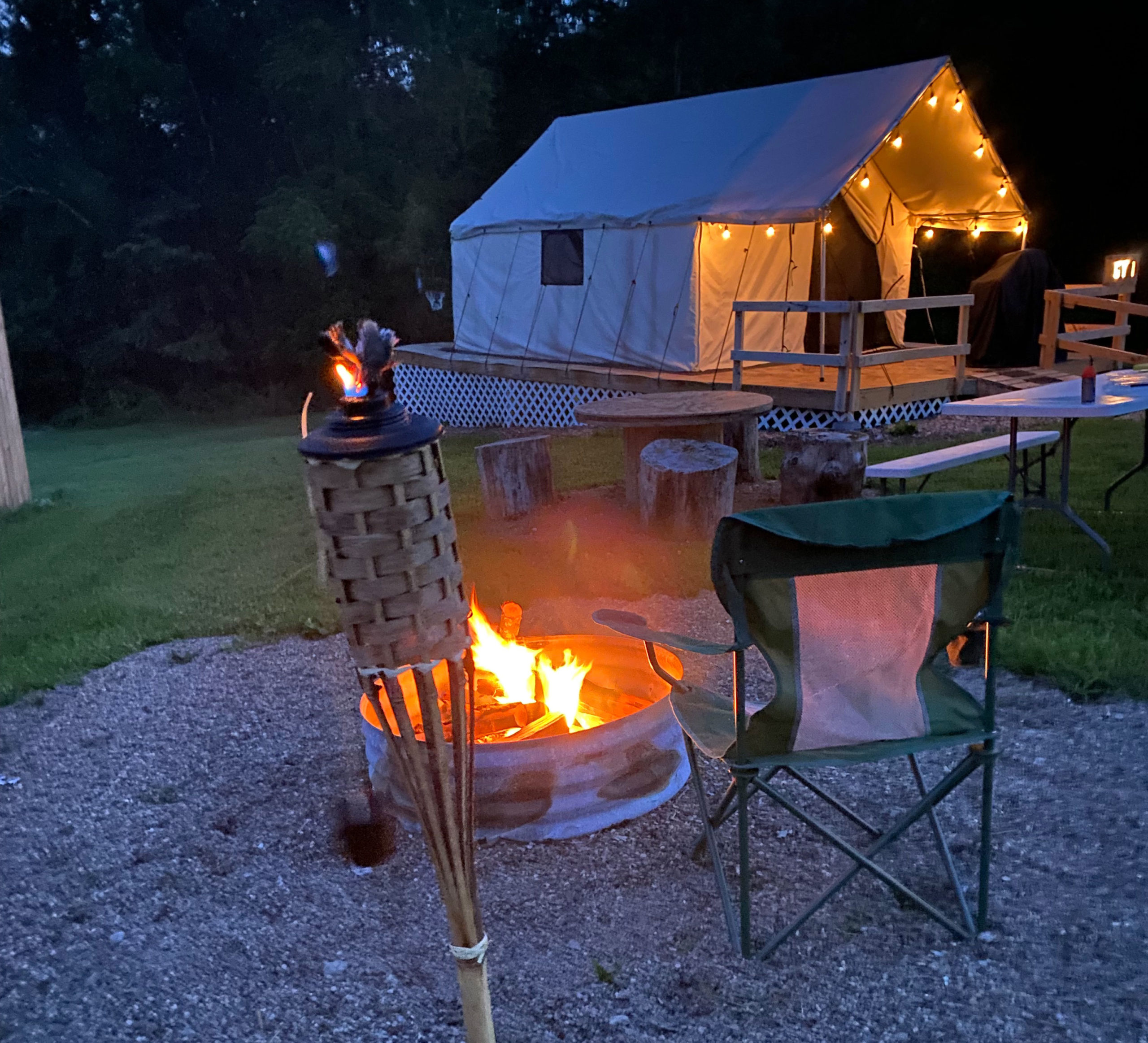 You can still toast marshmallows. The glampsite I stayed at was filled with almost everything I needed to prep food, without me having to own a little Coleman portable stove and propane. I had an electric grill on site so I could make my own dinner, and I also had my own personal firepit. Wood was available at the front desk so I didn’t have to worry about finding it in my own. The camp shop had pretty much everything I forgot, at reasonable prices. I found everything from food to lighters to other convenience items.

There aren’t a lot of bugs. This is a game changer! When you step outside into the woods, it’s fair game for the mosquitos, but the glamping tent had a mesh screen that was sturdy and really kept the bugs outside where they belong.

There’s more to do than just sitting in the woods. The KOA I went to had a pool (and most of them do) and some games for the kids to play, a playground and an area to watch movies on the weekend. Each KOA has different activities, but there are always entertainment options to choose from.

You don’t need to pack all that much. All you need are clothes, bedding (if needed), food, a lighter or matches, bug spray (for when you’re outdoors), camping chairs for around the fire pit and toiletries and you’re set. This is a much shorter packing list than when you go on a traditional tent camping trip that requires all of the gear. 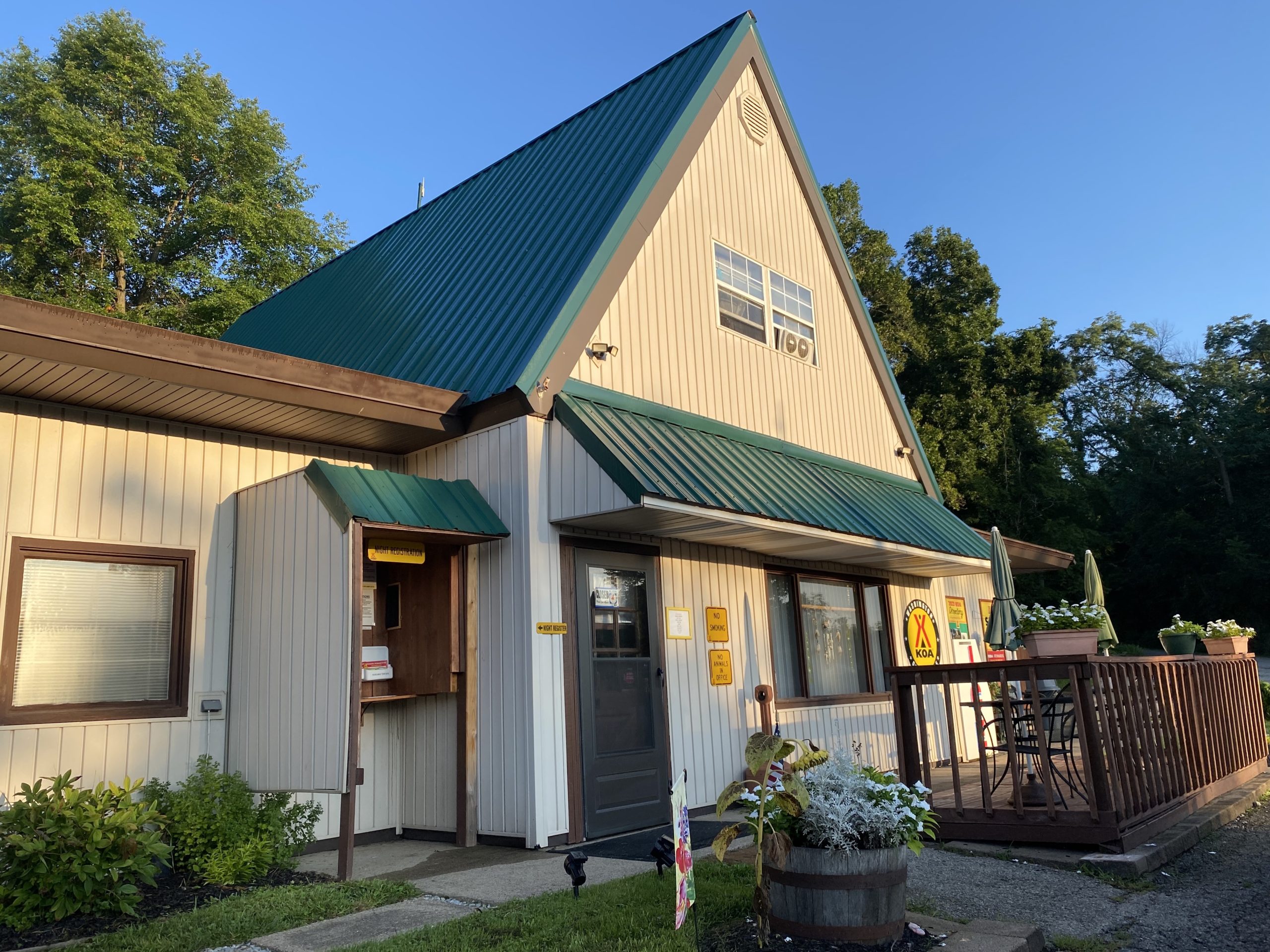 There’s WiFi… and sometimes even delivery. The KOA campgrounds pride themselves on having campgrounds that are accessible to plenty of activities and things to do. So while you’re relaxing in the woods, you aren’t all that far from civilization. The spot I was at was in driving distance to shopping and restaurants, which means that I could even get pizza delivered right to the front desk (which was just a short walk from my tent). And it meant that while I was embracing the outdoors life, I could still post pretty pics on Instagram, be accessible if someone needed to get in touch with me and could watch Netflix. 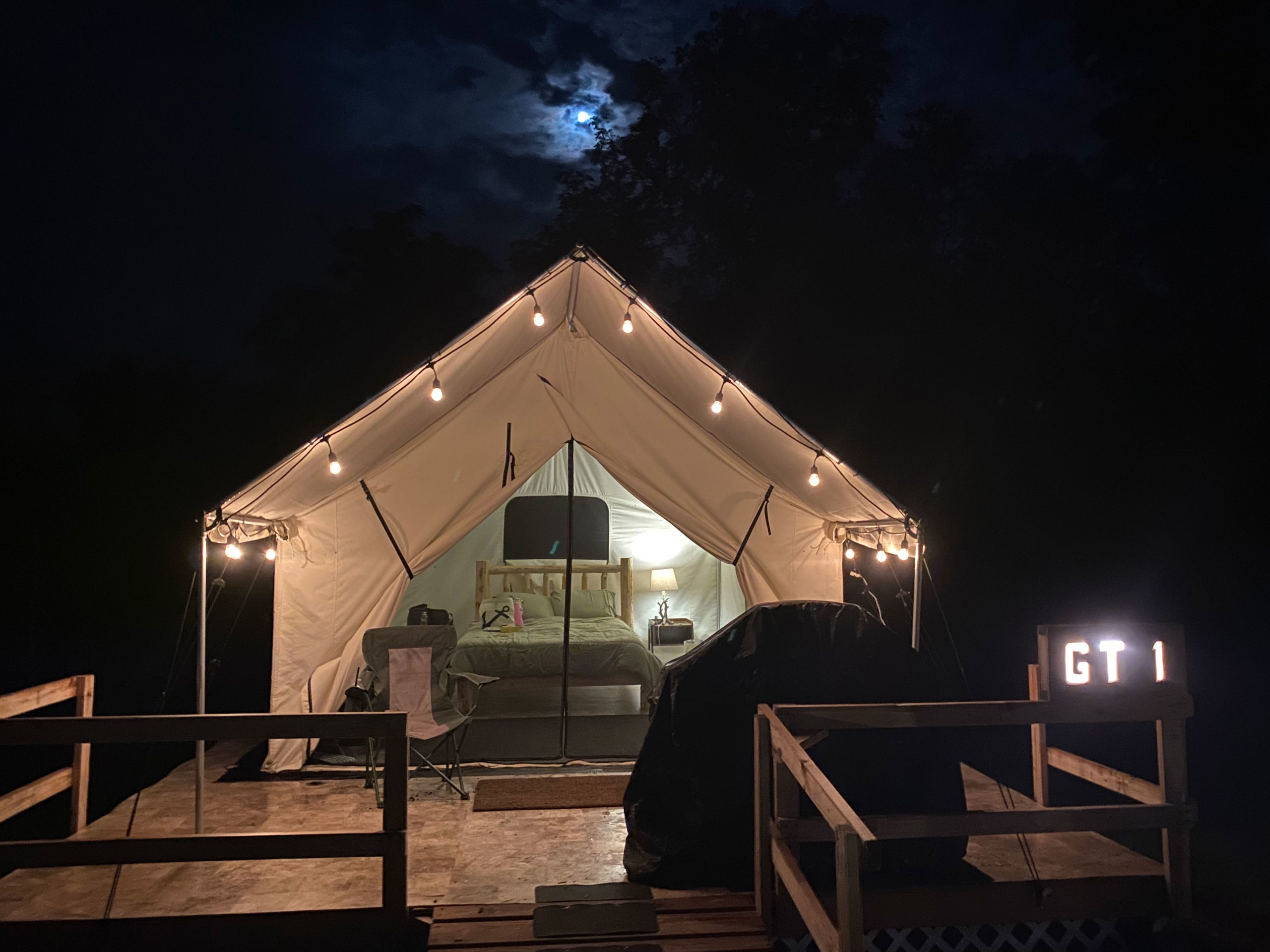 It does seem like cheating. I for sure got some laughs from friends who decided this was not real camping. But as I sat by my cozy fire pit under the full moon and enjoyed the sounds of crickets and the smell of fire, before I stepped back into my nice, dry tent when it started raining, I didn’t really care about what anyone thought.

If you’re looking to try glamping this fall, KOA is booking trips at most locations throughout October and into November. Or you can plan ahead for next year. The KOA I stayed at was not too far from Pittsburgh, which made it a great spot for exploring some local fun stuff to do. The staff at the camp store will be happy to help you find things to do in the area where you choose to stay. KOA has several campgrounds in the Poconos as well. Though not all locations have glamping tents, they do offer larger family cabins where you can still have some outdoor family fun without having to camp in tents.