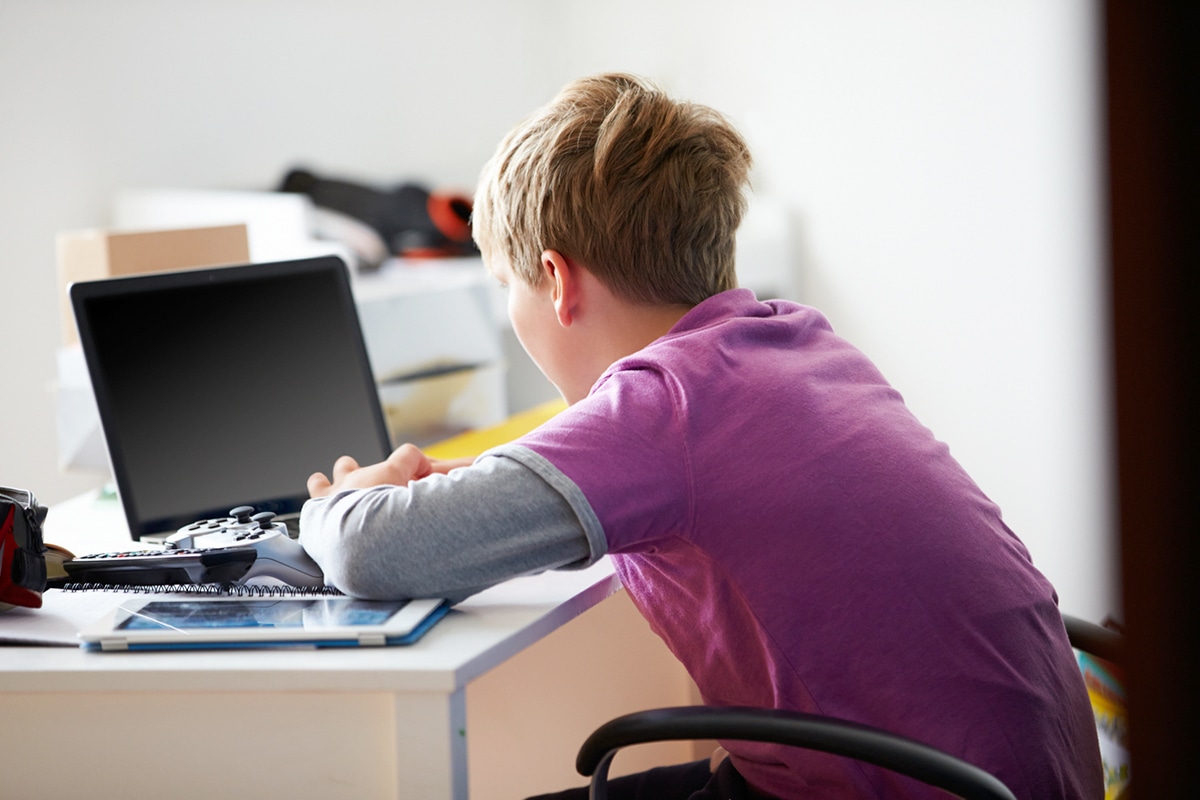 We know that remote learning has taken a toll on children from the social isolation, increased screen time and lack of physical activity. What you might not have considered is that it can also be a big detriment to your child’s posture.

With makeshift setups for homeschooling, many kids are just not properly positioned to spend all day in front of a computer in a way that supports their growing bodies.

“Remote learning contributes to poor posture because most homes are not ideally set up with work space for children,” says Dr. Barbara Minkowitz, MD, a board-certified pediatric orthopedic surgeon who is Chief of Pediatric Orthopedics and Medical Director of Pediatric Bone Health at Atlantic Health System’s Morristown Medical Center.

“They may not have chairs and desks that fit children appropriately. Even when set up, children are home and may prefer not to use a desk.” Minkowitz says, pointing out that children are working everywhere from the kitchen table, to the couch and even their beds.  “They tend to slump into whatever chair or pillow they are using. Poor posture can then lead to complaints of body aches and pains, particularly back and neck pain.”

Minkowitz says another big problem is that kids are much less active then they would be during in-person school. “Kids prefer to play games on the phone, tablet or computer rather than get exercise running around. This promotes poor core muscles in these growing children.”

So what can you as a parent do to help prevent those aches and pains and make sure your child is exhibiting good posture? Minkowitz says the first step starts with a picture.

“Since children only see themselves from the front, they do not see how bad they look from the side,” she says. “Take pictures of them slumping from the side to give them visual input. Then enlist them into wanting to not look so bad and keep reminding your child to straighten up. Take a picture of them sitting up. Discuss how they are losing height (which every child wants) to the poor posture. Think tall!”

A posture brace is another option for helping kids be more aware of how they’re sitting. “It looks like a backpack without the backpack,” Minkowitz explains. “It’s a dynamic tool that only works if the child wearing it will respond to the discomfort when slouching by sitting up and pulling away from it. This can be helpful as a reminder when sitting or standing to be upright.” Minkowitz stresses that the brace cannot be worn all the time.

Move More
“Children should move every hour and keep adjusting their posture when sitting back down again,” says Minkowitz. “An alarm may be helpful as a reminder.”

Revise Your Setup
Minkowitz says that computers and other technology should be lined up with the eyes so that your child isn’t looking down and straining his or her neck or slumping their shoulders.

“Elbows, hips and knees should be at 90 degrees with the feet firmly planted on the floor or something bringing up the level of the floor for balance,” she says. This stability can also be helpful for kids who need to improve their handwriting.

“Using a chair with lumbar support with a pillow or rolled up towel will encourage better seated posture,” says Minkowitz.

As for which type of desk to get, Minkowitz says it will depend on the size of the child. The key is that the child’s feet should touch the floor for proper balance and that their spine be straight with eyes looking ahead at a screen placed at eye-level.

“They can also have a standing desk station set up to give them a change from sitting,” she says.

Core of the Problem
Minkowitz says poor posture is endemic to all children of this generation and that it will become an even bigger problem if they don’t fight gravity and stand up tall. “One way to get the necessary core muscles and to maintain them is by following some simple daily stretching and strengthening exercises to be done at home,” she says.

Why It Matters
“Poor posture leads to decreased core muscle strength and decreased motion of the shoulders,” says Minkowitz. “Aside from affecting penmanship, this makes it impossible to have proper form for sports,” she says as posture affects everything from throwing to running. “This can be a set up for sports injuries that don’t resolve until posture muscles are strengthened and proper form for the sports can be achieved. Better posture has also been associated with improved mood and less depression and increased self-confidence.”

Make a Change Today
When it comes to improving posture in children (or adults!) Minkowitz’s biggest advice is to stay active. “Get up, get dressed, get outside and move,” she says. “Take breaks from tech and use tech in an ergonomic position that is healthier for the body. Work on obtaining core muscles and maintaining them. Stand tall with self-confidence! Fight the good fight against gravity.”