How Co-Working Has Helped Working Moms Connect During the Pandemic

You Can Now Get a Personalized “Visit” from Santa at Home 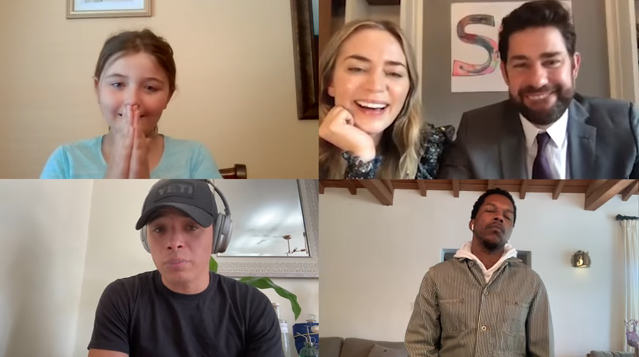 While he doesn’t have a regular talk show like James Corden or Jimmy Fallon, John Krasinski has been trying to lift our spirits during the COVID-19 quarantine with uplifting news on his homemade show Some Good News. His debut episode featured Steve Carell, which made Office fans cheer from home. In his latest installment, he reunited most of the original Broadway cast of Hamilton to cheer up one of the show’s young fans. In the process, he also made a million more Hamilton fans very happy.

Aubrey’s mom had tweeted that she and her daughter were supposed to be in NYC seeing Hamilton and instead had filled the void with Mary Poppins Returns. The Disney flick co-stars Krasinski’s wife Emily Blunt and Hamilton creator Lin Manuel-Miranda. Krasinski surprised Aubrey with a trip to NYC to see the show after the COVID-19 quarantine is over, and tried to cheer her up with a surprise appearance by Emily Blunt.

But what really cheered her up? That would be when Lin-Manuel Miranda Zoom-bombed (yes, that’s a thing now) the show and started playing the opening strains of “Alexander Hamilton.” Aubrey was almost in tears as almost all of the original cast, including Daveed Diggs, Phillipa Soo, Renee Elise Goldsbury, Christopher Jackson and more all popped in via Zoom to do their parts in the song. It is a beautiful rendition of the opening number, and the cast “reunion” of sorts is definitely some good news that we all need right now.

The segment begins about 8:40 into the show, but stick around longer to see Krasinski’s … unique outfit choice and a snippet of a COVID-specific parody of Hamilton’s “My Shot.”

And, in case you missed it, Adam Sandler brought his own Quarantine Song to Jimmy Fallon’s show the other day to help lighten all our moods as well.

Threads of Consciousness: The Tapestries of Jon Eric Riis

Learn to Crochet an Infinity Scarf (virtual program for grades...