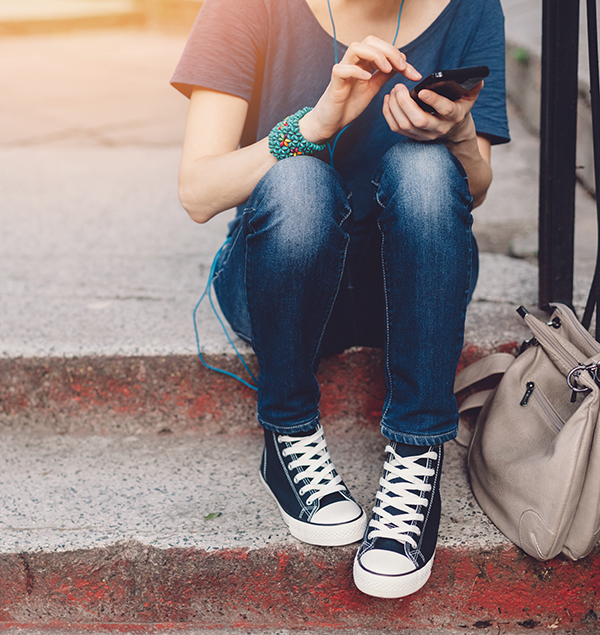 Anorexia and bulimia are flip sides of the same sad coin: They're all rooted in the desire to exert control over one’s body in order to look “perfect.”

Today’s tweens and teens, highly attuned to social cues and vulnerable to peer pressure, are increasingly getting the message through social media that they’re not the right size or shape, both passively and interactively. Simply being on social media can invite harsh and hurtful comments. But is it really any worse than our youthful obsession with magazine supermodels? Or our #goals to look like the head cheerleader? We spoke to experts in treating teens with eating disorders to get their perspectives.

“I do think there’s a major influence coming from social media,” says Hannah Beaver, licensed clinical social worker and a team leader at The Renfrew Center of Southern New Jersey in Mount Laurel. “Whether it’s rooted in their peers or celebrities, there’s a self-comparison going on.” The endless stream of perfectly trim, tanned, stretch mark-free bodies can trigger feelings of inadequacy and lead to abnormal eating behavior, among the early signs of an eating disorder. “There have always been some outside influences,” says Beaver. “What makes it potentially worse now is the access teens have, which is constant—it’s harder to avoid the negative exposure.”

Jessica, a 22-year-old Monmouth University student in recovery from her eating disorder, echoes this sentiment. The Instagram fan couldn’t help but compare herself to real world people who kept popping up on her feed (even suspecting that their curated photos were probably edited and retouched in pursuit of likes).

“There’s a correlation between people’s popularity on social media and their appearances, so people are often presenting themselves in the best way possible,” says Jessica. “Not only that, but it allows us to follow models, celebrities and fitness accounts. Their profiles, for the most part, give the world a skewed view of what an average body looks like. It’s hard not to look at models on Instagram and think, ‘Wow, I wish I looked like that.’”

IS THERE A BULLYING ASPECT OR IS THE PRESSURE INTERNAL?

It’s both. Kids definitely put pressure on themselves to look “perfect,” but they also know the sting of posting a photo and getting a slew of nasty comments about their looks or someone else’s. This is one of many factors that's led to the suicide rate among girls hitting a 40-year high. “Bullying via social media has hit a critical point and sadly, we continue to hear of young people committing suicide under this influence,” says Pamela Brodie, a Montclair-based psychologist and specialist in treating eating disorders. “I think we need to be more vigilant about [subtler] forms of bullying (spreading rumors, breaking confidences), not just the direct attacks of overt body shaming, name calling and hostility.”

WHAT CAN FAT SHAMING AND BODY ISSUES DO TO TEENS IN THE LONG RUN?

Nothing good. “Teens are at an age when they’re trying to form an identity, so if they’re developing body dysmorphia, it can create long-term self-esteem issues,” says Beaver.

Even adults who thought they’d overcome their adolescent body issues can succumb to social media’s knack for making people feel like failures (#notquiteasblessed). “I encourage parents to also remember they're the primary models for their children, so [they] might benefit from a self-check on how they're using social media, discussing their own body image and modeling their relationship with food,” says Brodie.

WHAT ARE THE SIGNS TO LOOK FOR?

Is your child spending all her time alone in her bedroom, glued to her screens? Congrats, you have a teenager. Is he or she also excessively moody, seemingly in response to something seen online? “It’s a sign that social media is having some sort of impact,” says Beaver. If you notice your child avoiding meals, picking at food, having anxiety around meal times, visiting the bathroom right after eating, hiding food or large quantities of food disappearing in a short amount of time (a sign of a binge), it’s possible an eating disorder is at work.

SOMETHING’S DEFINITELY GOING ON. HOW DO YOU GET NOTORIOUSLY TACITURN TWEENS AND TEENS TO OPEN UP?

A good starting point is to ask them how they feel about themselves. “Do they often find themselves comparing to their peers and in what way? What do they find their self-worth is based on? If it’s looks, that signals vulnerability,” says Beaver. “Teens are often secretive, and it’s always good to put it out there that when they do want to talk, [you're] there to listen.”

It’s also smart to ask your child what she feels is the best way to approach her with an issue so it doesn’t feel like an inquisition. You may want to bring up the subject earlier than you think. “Children as young as 8 or 9 years old are developing some level of body hatred—especially if they have access to the internet,” Beaver says. And according to the National Eating Disorders Association, at least 40-60 percent of elementary school girls (ages 6-12) are concerned about their weight or becoming too fat—a worry that endures through life.

WHAT CAN WE DO TO COMBAT SOCIAL MEDIA’S INFLUENCE?

For starters, limit online time if you see it’s potentially harmful. “I found the best way to mitigate the effects of social media on myself was to avoid following accounts that would cause me to think negatively about my own body image,” says Jessica. “I also try [to]

check social media just once a day [so] I'm not constantly scrolling through pictures and videos…comparing myself to others.”

Insist on access to your teens’ social media feeds, but keep in mind they might have a “clean” one and a secret “real” one, so it’s more important to inoculate them against negative influences by teaching them to be resilient in the face of bullying, pressure or feelings of being less than.

Brodie often asks clients to answer fill-in-the-blank statements, such as: ‘I’m not _______ enough.’ This helps get to the core beliefs that may drive disordered thoughts and behaviors, shining a light on illusory beliefs “that ‘everyone else’ looks better, and has fun, friends and better things,” says Brodie.

Above all else, a strong parent-child relationship matters most. “Attending school meetings, cheering at their games, knowing who their friends and friends' parents are, insisting on family outings (even if/when they resist) and carefully walking the line between permissiveness and freedom allows parents to accurately assess their child’s well-being, and react quickly if something’s changed,” says Brodie.

SOME FEEL THE NEW NETFLIX MOVIE TO THE BONE ROMANTICIZES ANOREXIA. SHOULD I LET MY TEEN WATCH IT?

“I think the mindset of the viewer would be the key to whether it's glamorizing or cautioning against the illness," says Brodie. “My clients with eating disorders have shared they're finding it very triggering and some haven't been able to watch it. Those not dealing with an eating disorder are likely to find it disturbing.”

She suggests parents watch with their teen plus kids armed with knowledge about eating disorders and prepared to gently challenge perceptions. It’s also a great jumping off point to discuss related issues such as body image, peer influence and social media. Says Brodie: “Nothing will change unless we bring these issues to light.”

Check out the National Eating Disorders Association Parent Toolkit for tips on how to talk to your teen about eating disorders. Go to nationaleatingdisorders.org/parent-toolkit.