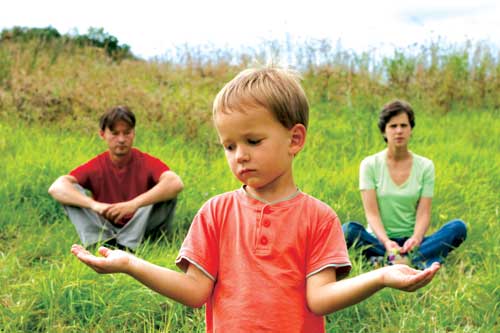 Shelley* speaks softly about her realization that her “perfect” little boy was not perfect. Stevie*, now 5, didn’t walk until he was 21 months old, and didn’t talk until he was 3-1/2. His hours-long tantrums overwhelmed her.

“He’d hit himself on his head, scream, and hit the floor. I tried everything—distraction, baths, feeding. My anxiety level was so high. I didn’t know what I could do to help my son,” say the Burlington County, NJ mom and nurse. “I’d call my mom and cry. Then I’d call my husband Alan* and cry.”

Their eight-year marriage unraveled. “When Alan would come home, I’d pass Stevie off, and just drive and go where I didn’t have to listen,” Shelley says.

With doctors giving Shelley conflicting information, and Alan in denial about their son’s disabilities, Shelley admits she became resentful. “I felt like a huge failure as a mom,” she says. “That’s where Alan and I started to drift apart: he could sympathize—but not empathize, because he was not there when it was happening. I felt alone.”

Months later, doctors at Children’s Hospital of Philadelphia delivered the diagnoses: a form of muscular dystrophy and high-functioning autism.

“There are additional demands in parenting and stresses placed on marital relationships when partners have children with disabilities,” says Fran Prezant, vice president of the Long Island-based non-profit organization Abilities!, and co-author (with Laura Marshak) of Married with Special Needs Children: A Couple’s Guide to Keeping Connected (Woodbine House, 2007).

These marriages have heightened challenges, she says. “There are amplified concerns about childcare, education, medical issues, socialization, and with children who have very severe disabilities, there’s added focus on finding therapeutic intervention, dealing with medication or surgery, and being unable to leave the child unattended for even seconds.”

In Shelley and Alan’s case, the couple worked opposing hours, so one was always home with their child. They faced out-of-pocket expenses for speech therapy, and were concerned about what would come. Their communication was weak; intimacy was rare.

Psychologist and family therapist Dr. Jeryl Rempell, a board member of Declarations, Inc., a non-profit organization in Manalapan, NJ helping those with developmental disabilities and mental illnesses, believes the primary caretaker often is so knowledgeable that the other feels alienated or inadequate. She suggests both parents participate in doctors’ appointments so one doesn’t feel alone, even if one partner is on a speakerphone.

Rempell also says partners respond differently to a diagnosis, and mourn their dreams for their child in different ways. “It doesn’t hit the parents evenly: one might want to go out, the other doesn’t, pulling back from interactions,” she says. One might gather information, for instance, as the other unwinds with a movie. It’s important not to denigrate each other’s coping style.

While it’s often thought many couples with special needs children experience a higher rate of divorce (a 2008 SUNY-University of Buffalo, NY study showed parents of a child with ADHD twice as likely to divorce by the time the child is 8), Prezant and Dr. Laura Marshak interviewed hundreds of couples and found a more hopeful message: couples in these situations can and have thrived. Many used creative solutions and external support, like counseling. Some relied on peers at online resources and disability associations.

“It’s critical parents reestablish a bond despite the sometimes all-encompassing demands of the disability, and work as a team,” Prezant says. “Even more important is finding time for each other and for romance, and not being detached or attached only around child-related issues.”

Rempell agrees “us time” is important. “If a couple can devote time at the end of the day—even if it’s 20 minutes after the children go down to sleep—carve out that time. Have a glass of wine or coffee, and sit and face each other. Say, ‘How are you?’ and listen,” she advises. Check during the day on the other; communication becomes the saving tool. And celebrate small triumphs together.

“Supportive family and friends [are] lifelines for many couples, though many parents have difficulty asking for help, thinking it [could] convey inadequacy,” says Prezant.

Shelley and Alan found it hard to have a date night because they didn’t feel comfortable calling neighborhood teens to babysit. (Therapists recommend trying respite care.) Still, Shelley says the marital rift wasn’t Stevie’s fault. “I don’t want to blame him. Alan is a fantastic father. It was how we handled ourselves,” she says.

But they’re trying to restore their marriage. They’ve moved, to be closer to family. They’re talking each night. And they recently went to their first movie together in six years.

*names have been changed.

Here are some strategies to strengthen the bond with your mate:

Kristine Meldrum Denholm is a freelance journalist who writes about family issues and psychology.