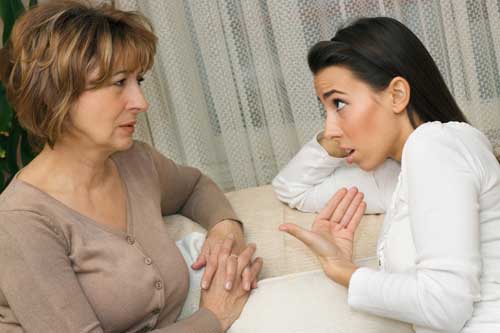 We all have heard men are from Mars and women are from Venus. But once your children hit their teens, it might seem they're from another planet altogether!

So what's a parent to do? Psychologists Dr. Jennifer A. Powell-Lunder and Dr. Barbara R. Greenberg, co-authors of Teenage as a Second Language: A Parent's Guide to Becoming Bilingual, worked with hundreds of teens and their families and concluded through their evidence-based research that teens actually do speak their own language. They suggest you learn teen talk the same way you'd learn Spanish or French.

"Teenage is a multifaceted language,” says Powell-Lunder. “Learning it involves interpreting both what your teen is saying to you with words, as well as what his body language is telling you. Often the two don’t match, which makes it difficult for parents to understand what their teens are really saying."

For example, she says, if your teens talk to you with arms crossed, or a hand over their mouth, or feet facing the door, it might be indicate they're not comfortable with what they're saying. They're likely withholding information and/or are desperate to end the conversation.

"As with any language, however, it takes time and effort to correctly understand and translate," she says, insisting the process is worth it. "The quantity and quality of the communication between teens and parents affects teen decision-making. Teens who communicate well with their parents not only make smarter, healthier life decisions, as adults they actually live longer!"

Here are some examples of teenspeak and how you should respond.

Suggested response: Leave this alone. Don’t let your concern that your teen may be less than thrilled create an unnecessary controversy.

Suggested response: Respond in an interested, neutral manner. "I am interested in the rest of the story if you feel like telling me now or later."

Suggested response: None needed. You’ve made your wishes known.

Suggested response: "I'm sorry you're upset, but that isn't going to change my answer."

Suggested response: "Sorry, when you're ready to talk to me maybe we can find other fun things to do." In all cases, avoid responding sarcastically. (Of course, if they genuinely thank you for something, acknowledge the good manners, too!)

"Teens are, by nature, egocentric. They assume the whole world is watching them and everything they think and feel is unique to them. Your perception of your teen should take these factors into account," Powell-Lunder says. "If their responses frustrate or anger you, calmly explain why. Anger begets anger. It’s not what you say to your teen but how you say it that can make all the difference."

The authors have an interactive website (Talking Teenage) for parents and teens to listen, learn, and discuss hot topics and daily dilemmas.

About the book: Teenage As a Second Language (TSL): A Parent’s Guide to Becoming Bilingual; Adams Media.

How are you at decoding your teen's language?