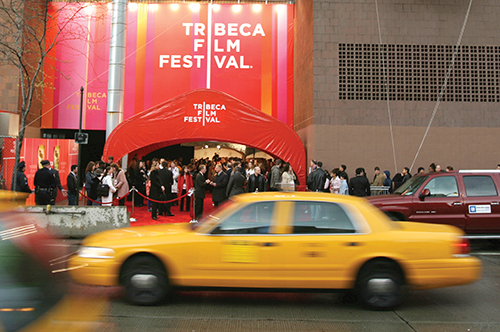 From April 15–26, the Tribeca Film Festival will be the place to catch all the movies (narrative features, documentaries, shorts, multimedia—you name it) you can't see at your local multiplex, making it the perfect opportunity to introduce your teen to non-blockbuster cinema. Past films have run the gamut from a sexy, modern version of Lady Chatterley’s Lover, to an Irish slapstick comedy about an out-of-hand bachelor weekend, to a documentary about the NY Knicks. But Tribeca isn’t just for independent and foreign movies—It also presents a special (car-free) drive-in series that screens American classics, like Mary Poppins and Splash (yes, Splash is considered a golden oldie now). Interested? Act fast. Tickets go on sale in March and sell out quickly. If you miss the window of opportunity, there’s always their online festival (which lets you stream exclusive features and shorts from their official line up and vote for your favorites), and plenty of other NYC film fests, like The Unusual Film Festival, the New Directors Film Festival and the French Film Festival in March; the Latin American Film Festival and the Bad Film Festival in April; the Soho and Brooklyn Film Festivals in May and the Human Rights Film Festival in June.
54 Varick St. 212-941-2400, tribecafilm.com. $10–18/person depending on day and time, with $2 off every evening and weekend ticket for students (in-person only, ID required). 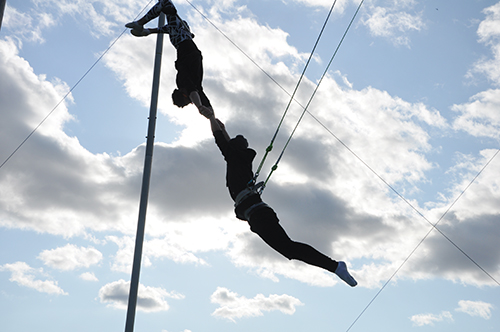 Help your teen feel even more invincible by taking them for a whirl on a flying trapeze. Starting in May, the Trapeze School of NY's outdoor classes at Pier 40 and South Street Seaport will have you swinging through the air and attempting knee-hangs and catches while tourists gaze up in wonder. Remember to wear tight-fitting clothes that cover as much skin as possible (so you don’t hurt yourself when flopping down into the net), to put up your hair, bring socks, light slippers and, on hot days, a towel—because you will be sweaty. And terrified. But, you’ll be making a one-of-a-kind memory with your teen, so it's worth it.
Pier 16, South Street Seaport & Pier 40, Hudson River Park. 212-242-8769, trapezeschool.com. $50-70/person, depending on day and time.

Amateur Night at the Apollo Theater 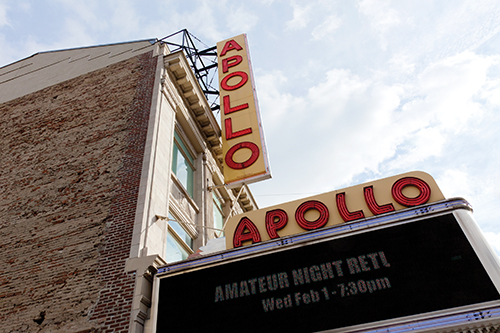 Long before Star Search or American Idol there was Amateur Night at the Apollo. Since 1933, this star-minting competition has been churning out legends like Ella Fitzgerald, Stevie Wonder, Michael Jackson, James Brown and Lauryn Hill, and lucky audience members have been the first to see—and hear—them all. Your clapping determines which three acts get to move on to the next round of competition (and your boos trigger a tap-dancing “executioner,” who literally forces an unpopular act off the stage—whether or not they’re done). The 2015 season goes straight through November (every Wednesday at 7:30 pm), making spring and summer the ideal time to grab a seat as the contest heats up in anticipation of the fall Top Dog showdown, where weekly first, second and third-place winners go head to head for the chance to be crowned season winner.
253 West 125th St. 212- 531-5305, apollotheater.org, amateurnight.org. $20–32/person. 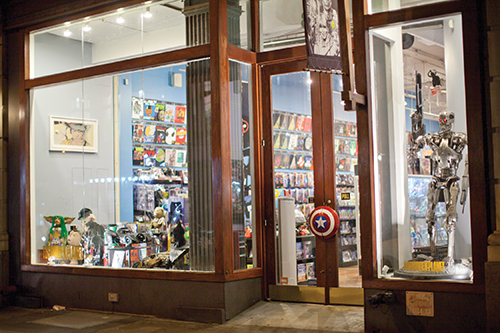 If your teen prefers his science purely fictional, Forbidden Planet has you covered. Prepare to fall down a black hole of geekdom as you step into this downtown Manhattan Mecca because (fair warning) this isn’t just another run of the mill, neighborhood hobby store—This is the epicenter of all things gaming, graphic, cosplaying, collectable, watchable and accessorized. The staff is friendly (they’ll never chase you out for just browsing) and knowledgeable, and make great recommendations, so even if you don’t know exactly what you want, they will. (Plus, if they don’t have it, it likely doesn’t exist.) The action figures, posters, apparel, collectibles, books, trading cards, games and toys are guaranteed to have your teen acting like a kid again.
832 Broadway. 212-473-1576, fpnyc.com. Prices start at under $5. 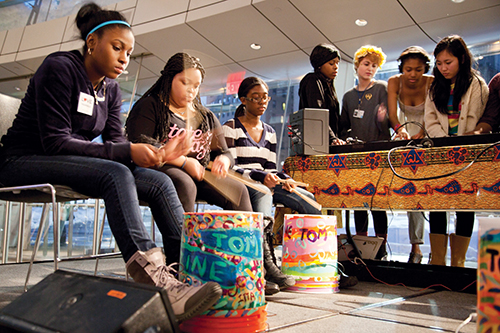 Teens are welcome at NYC museums every day of the week of course, but some spots offer special nights specifically for the high school set. On April 24, head to the New Museum on Bowery for an evening of live musical performances and interactive drawing and painting on paper and online. Or check out the Brooklyn Museum on March 13, April 24 and May 15 for Teen Nights focusing on different themes, artists and exhibitions with live music. Similar fests (planned by teens for teens) go on year-round at the Museum of Art and Design in midtown Manhattan, The Metropolitan Museum on the Upper East Side, the National Academy and more. Many have a parents area, too, where you can grab a snack (sometimes even of the alcoholic variety). All Teen Nights are organized by the Museum Teen Summit, so check out their Facebook page for the latest listings.
Museum Teen Summit, facebook.com/museumteensummit
New Museum, 235 Bowery. 212-219-1222, newmuseum.org. Teen night: free; General: $16/adult, free/teen
The Brooklyn Museum, 200 Eastern Pkwy. 718-638-5000, brooklynmuseum.org. Teen night: free; General: $16/adult, free/teen 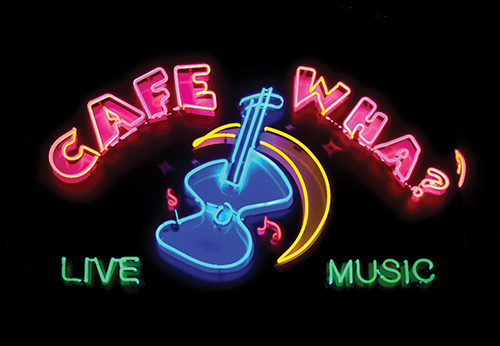 While Ella, Stevie, Michael, James and Lauryn were busy being discovered uptown, Bob Dylan, Jimi Hendrix and Jersey boy Bruce Springsteen were making names for themselves downtown in Greenwich Village, playing as part of Café Wha?’s seven-nights-a-week live music scene. Looking for a particular sound? Tuesdays are dedicated to soul, R&B and funk, and every night is a game of who might show up to sit in with the House Band (Eddie Van Halen is one superstar regular). And there’s food, too, including vegetarian options, burgers, salads and desserts. Don’t get spooked by the posted two-drink minimum—Café Wha? has always been teen-friendly (Springsteen and his earlier band, the Castiles, got their start playing for kids during the now discontinued, non-alcoholic afternoon sets), so you can order two sodas and just enjoy the show.
115 MacDougal St. 212-254-3706,
cafewha.com. Cover charge varies depending on night of the week and two-drink minimum. 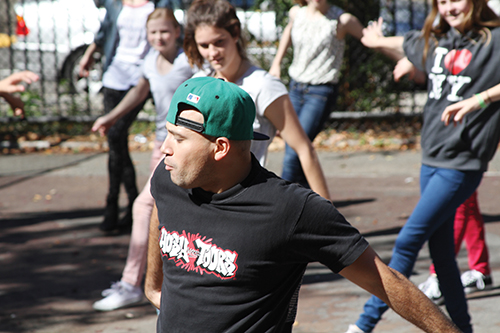 It’s the world’s only hip-hop tour company and, appropriately, it’s straight out of Brooklyn. Climb on a bus or hit the pavement for a look at the Birthplace of Hip-Hop, highlighting historic clubs where major rap battles took place and classic music videos were shot (though you might have to explain to your teen what a music video is and why they were all the rage). Do some sight-seeing on Tours of Harlem, which focuses on the music scene of uptown Manhattan, or head to Hunt’s Point in the Bronx for an up-close look at murals spray-painted by artists from around the world, like the 200-foot Battle Wall on Drake Ave. And if you’re looking to get some culture with a side of exercise, sign up for Dancers’ Delight, which includes a hip-hop dance lesson right on the streets where many of hip-hop’s moves were first debuted. Past celebrity guides have included Grandmaster Caz and Kurtis Blow, so you never know who might be leading your tour!
Starting locations are made available upon ticket purchase. Tours start at 11 am and are 2–4 hours. 212-714-3544, hushtours.com. $35–70/person, discounted tickets available for ages 6–18.

Space Shows at The American Museum of Natural History 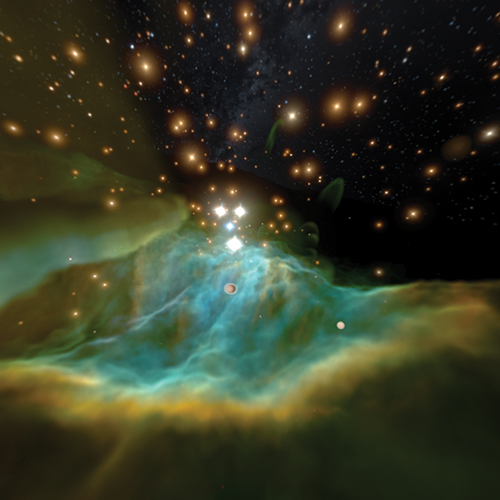 Nothing drives home our tiny role in the solar system better than a trip through a Dark Universe, a cinematic space show narrated by Cosmos host and cult hero Neil deGrasse Tyson projected onto a 67-foot-wide hemispheric dome. The topic (perhaps especially poignant for a teen who might, at the moment, feel like the center of all things), is a great science-fiction-meets-science-fact experience—though, rest assured, actual learning is purely optional.
Central Park West at 79th St. 212-769-5100, amnh.org. Museum admission: $22/person (over age 12); show admission: $13.50/adult, $8.50/child. 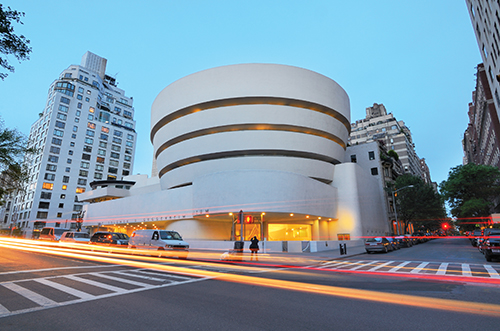 One of the best parts about bringing a teen along to NYC is scoring $5 tickets from High 5 Tickets to the Arts to all matter of art events (grades 6–12 with an student ID, driver’s license or recent report card), since the discounts apply to a teen and an accompanying adult. Buy passes for major museums like the Guggenheim, avant-garde theater companies like La Mama or innovative modern dance companies at the Joyce. Check out teens.artsconnection.org for a calendar of events (updated about one month in advance) and to buy tickets.

More Like This:
Ways Working Will Help Your Teens
Why You Should Take Your Teen to NYC
Are Your Children Getting Enough Sleep?