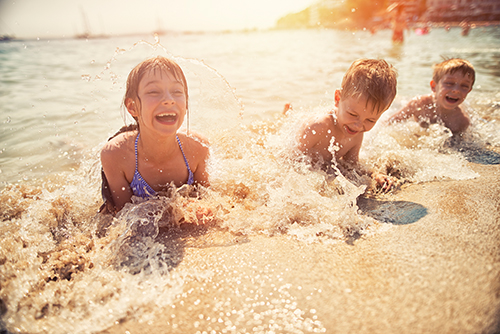 Those swim lesson you’ve penciled in will help her learn the back float, but they may make her smarter, too. Children who learn to swim before kindergarten master many developmental milestones earlier than those who don’t, according to a Journal of Pediatrics study.

Researchers surveyed parents of 7,000 children under five years old from the United States, Australia and New Zealand over a three-year period. Compared to their non-swimming counterparts, young swimmers tended to hit various physical and cognitive milestones earlier, including math and language skills like counting, reading and verbal expression as well as visual-motor tasks like paper-cutting, coloring in the lines, drawing shapes and standing on one leg.

The American Academy of Pediatrics (AAP) now recommends that kids start early and says babies as young as a year old can benefit from swim lessons. That’s a reversal of its previous recommendation that children should wait until they’re at least four.

How to Pick a Swim School

Swim instructors should be certified by the Red Cross or another reputable swim safety organization and have up-to-date CPR-training for babies and children.

Make sure the pool is clean with proper lighting and visibility and a trained lifeguard is keeping watch. Water between 83° F and 86° F is the temperature that most people find ideal when first learning to swim.

• MAKE SURE TEACHERS STAY IN THE WATER

Instructors should always be in the water for lessons, rather than teaching from the edge of the pool.

The teacher-to-child ratio must be appropriate for your kid’s age and level, which means at least one instructor for every six kids two-to-six years old, and one for every eight ages seven and up.

How to Keep Kids Safe From Drowning

What to Know About Secondary Drowning