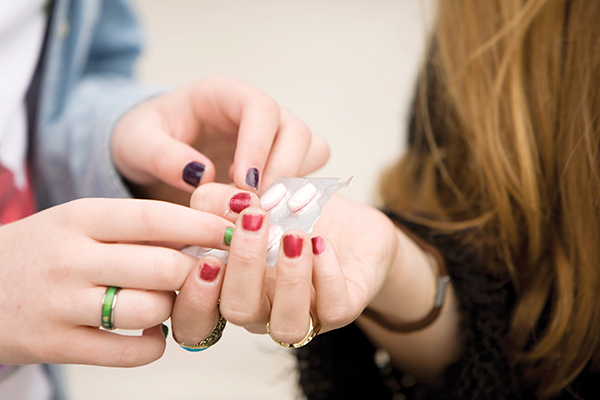 Michael* started stealing his dad’s OxyContin freshman year. “At the time I thought I was cool and did it with my friends just for the high,” he remembers. “I was able to keep it from my parents for longer than I thought. When I first stole the bottle, they didn’t even know it was gone.” Since then, Michael, now 26, has been to three rehab facilities across the country and fights to stay clean every day.

After marijuana and alcohol, prescription drugs are the most commonly abused substances by teenagers and young adults ages 14 to 24 in the US, according to research from the National Institutes of Health (NIH) and Trust for America’s Health (TFAH). The good news: prescription drug abuse among high school seniors has gone down slightly, from 18.3 percent of kids in 2015 to 18 percent in 2016, according to the same research. And in a recent effort to help control painkiller abuse, NJ Governor Chris Christie recently signed a law allowing doctors to only prescribe five days of opioids at a time.

Despite the slight decline in teen drug use, experts warn that parents need to be vigilant when looking for signs of drug use. New Jersey still has the sixth highest teenage overdose rate, according to a 2015 study by the TFAH. If you suspect your teen's experimenting with prescription pills, look for bloodshot eyes and nosebleeds, sudden changes in appetite, sleep patterns or weight, a lack of hygiene, impaired coordination and shakes or tremors, according to the National Council on Alcoholism and Drug Dependence (NCADD).

“Not every kid who uses someone else’s prescription is going to get addicted, but  teenagers are known for experimenting,” says David Buch, MD, chief medical officer and addiction specialist at East Mountain Hospital in Belle Mead. “The use of these pills can progress [into] some of kind of full-blown tendency and some kids are at a higher risk of being addicted than others.”

You may think your kid doesn’t have access to prescription pills because you’re careful about keeping them locked away. But most teens who abuse pills get them from a friend, relative or a family member, reports the National Institute on Drug Abuse for Teens. “Some kids are starting out using pills that they found in their parents or friends’ drug cabinets and it’s definitely a significant issue,” says Buch. “Twenty percent of teens will get their hands on some kind of prescription medicine, and of those teens 60 percent get it from someone they know.”

Boys and girls tend to abuse prescription drugs for different reasons, according to the same report. Boys are more likely to use prescription stimulants to get high, while girls tend to use them to stay alert or lose weight. One of the most common reasons for prescription pill abuse among teens is to boost concentration and grades, particularly when it comes to amphetamines. “I get the question of whether drugs like Adderall are getting prescribed truly for attention disorders or to help kids with average academic performance all the time,” explains Buch. Problems start when teens share pills with friends to help them stay alert or up late to study.

That’s when the cycle of abuse really kicks in, explains Frank Greenagel, clinical social worker and professor at Rutgers University in New Brunswick who specializes in addiction and recovery treatment. “The come down effects of a lot of prescription pills are all similar,” he says. “Naturally, you have a baseline attention span and the amphetamine heightens it, but when you come down you’re tired and below your baseline, making you worse off than when you started.” This results in a need to take more pills to stay alert.

Teen drug abuse is also tied to what they see at home. If you’re popping pills, they won’t think anything of it. “Like any behavior, kids are going to be more inclined to do it if they've seen their parents doing the same thing,” says Greenagel. “And the same goes for all substances. Seventy-five  percent of teens whose parents smoke marijuana say the behavior is okay, compared to 15 percent in kids with non-smoking parents.”

WHAT YOU CAN DO

Having frequent and honest conversations with your teen about drugs is hard and often uncomfortable, but it’s one of the best lines of defense. “Make sure you’re engaging in non-judgmental conversations with your kid,” says Buch. “It’s not always the easiest thing in the world, and sometimes you need someone else to help you, whether it’s an addiction specialist or your pastor.”

Another way to prevent drug use at home is to attack the problem from the outside. Greenagel suggests getting involved in your PTA’s drug awareness committee and you’ll have a direct line to experts who are well versed in prevention.

“A wealthy school district will poo-poo an outsider coming in for an evaluation because they don’t want to be known as ‘the drug  district,’” says Greenagel. “The districts that tend to be the best off when it comes to drug prevention are those that have a lot of parents involved in the PTA [who] go to school board meetings.”

The best way to keep your teen safe? Make sure she knows she can come to you with any  problem, big or small, and you’ll be far more likely to prevent her from experimenting with drugs in the first place.

There are tons of street names for drugs. Here are some of the most common, according to the National Institute on Drug Abuse and Teens: