We Must Do Better: Social Accounts That’ll Help Educate Your Family About Anti-Racism

Talking to Our Kids About Racism: We Must Do Better 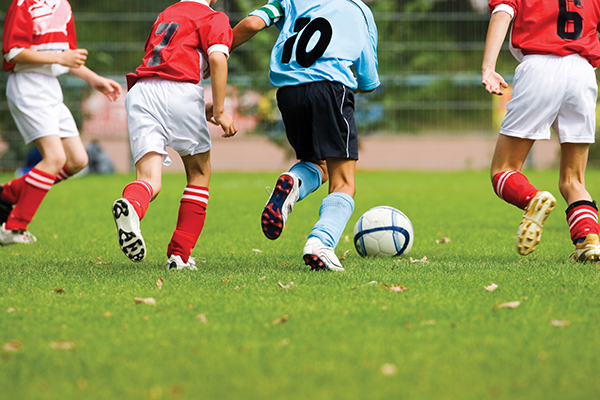 The start of a new school year means kids are back on the field playing their favorite sports. While watching their games—and taking in all the lessons they learn about teamwork—is fun, there are injuries to worry about, too.

More than 3.5 million kids 14 and under get hurt annually playing sports, according to the National SAFE KIDS Campaign and the American Academy of Pediatrics. If your kid plays a fall sport, here’s what to keep a close eye on.

As suspected, football is considered the most dangerous contact sport. Concussions are the most infamous injury. According to a 2015 study by the Brain Injury Research Institute, 20 percent of high school football players sustain varying levels of brain injuries. And 40.5 percent of adolescent players in the US return to the game before they’re completely healed.

The Return to Play law (which was passed in 2009) requires that players take more recovery time before getting back in the game. In NJ, students must be evaluated by a doctor or licensed health care provider and complete a concussion management checklist to get clearance.

If you think his helmet has him covered, think again. “The helmet is for preventing skull fractures, and it does a great job—but it doesn’t significantly reduce or prevent concussions,” says Stephen Rice, MD, Jersey Shore Sports Medicine and Concussion Center Program Director. That’s why experts suggest decreasing one-on-one tackles in practice instead of relying on headgear.

Soccer Injuries to Watch Out For

Football is the leading cause of injury in high school boys, but soccer is the biggest culprit when it comes to girls the same age, says the Brain Injury Research Institute. In addition to shin splints, groin pulls, cuts, bruises and more, concussions are a significant worry. Although there’s no definitive medical reason, girls suffer concussions 68 percent more often than boys, according to a 2008 report in the Journal of Athletic Training.

Proper heading technique is an important part of preventing concussions. The US Club Soccer Organization says kids 10 and under shouldn’t be heading the ball at all, while kids ages 12-13 should be limited to 30 minutes of header training per week (no more than 15–20 headers per player).

To help prevent a head injury on the field, ask her coaches if they’re teaching proper heading techniques during practice. Then ask them to demonstrate so you can reinforce it at home.

But there’s more to worry about when it comes to soccer than just head injuries. ACL (anterior cruciate ligaments) injuries are the boogeyman to many athletes for good reason.

The ACL typically gets hurt by the femur rotating over a fixed tibia while the knee is near full extension (in other words, the foot is placed down but the leg changes direction). Major ouch.

Young women are more likely to get an ACL injury due to their anatomical shape. The legs and pelvis shift during puberty, so their legs are more bent and knock-kneed when they land and therefore more vulnerable. 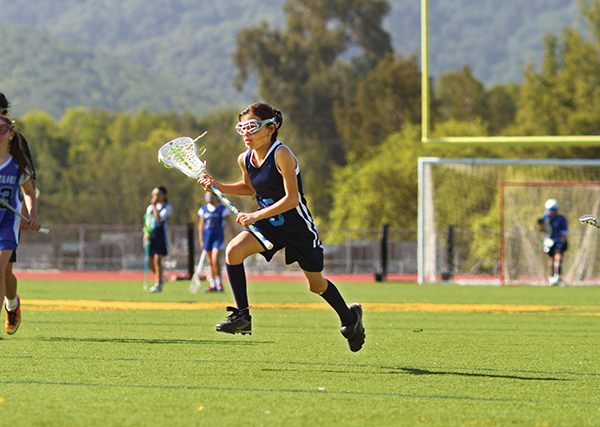 Lacrosse is somewhat notorious for being a rough game across the board, with a range of injuries including sprains, contusions, fractures and back pain. But girls are more at risk when it comes to lacrosse, most likely because the game’s rules for each sex are different.

Boys can check; girls can’t. Boys have helmets; girls don’t (just goggles, except for the goalie). Boys can kick the stick back as far as possible; girls can’t pass their heads. These rules initially kept girls safer by limiting the speed and force of each pass. But now it’s another story.

“[A girl] 20 years ago playing lacrosse, [she] couldn’t amass that much speed with [her] shot,” explains Avella. “But now [she] can shoot it 60-70 mph without question. A girl is much more vulnerable to getting hurt [now] because [she’s] not protected.”

In volleyball, most injuries are due to overuse rather than contact, aside from hand and finger injuries. “Volleyball involves a lot of up and down, [so] there’s a lot of fatigue,” says Avella. Not to mention the repetitive motions of setting, serving and spiking.

Ankle injuries, though, most often put players out of commission, according to the Children’s Hospital of Colorado. It’s easy for two players to collide at the net and land on each other’s feet, leading to painful sprains that can be recurrent if not properly rehabbed. It’s super important to strengthen the ankle and ligaments supporting it year-round to prevent injury.

Shoulder problems can come from overuse, plus lower back problems. The rapid extension players use when hitting is why there’s a higher rate of volleyball players with spondylolysis, a stress fracture often in the lower lumbar, also common in tennis players because they’re always extending their spines to serve and hit.

Tennis is perhaps less popular, and in many ways safer, since there’s no contact. But tennis elbow, an injury that occurs after the muscles in the wrist become extended and overused, still plagues players across the court. Proper warm-up and cool down are his best bets for beating it.

Cross country may seem relatively safe, too, but it tends to be the go-to for high schoolers who don’t make the cut for their preferred sport.

“Those athletes want to stay active, so they look for a sport where they’re not going to get cut,” says Avella. “They have strong lungs and they’re in pretty good shape, but sport specificity is important.”

In other words, cross country is tough on the body for athletes who are new to it. A soccer player who runs on turf or grass all the time won’t adapt right away to running 6-7 miles on concrete.  It’s the perfect storm for a ton of shin splints.

Before (and After) They Get Hurt

From cheer and gymnastics to swimming and basketball, talking to your kids’ coaches (and making your kid comfortable with talking) about how to prevent injury and safety is always key.

The most important things an athlete can do are stay hydrated and stretch. Muscles often don’t grow as fast as bones in kids, so stretching helps aid the disparity. She should always warm up the muscles before stretching (so instead of just stretching then going for a run, she should walk a few minutes, stretch and then start running). Introduce her to yoga early to get her used to effective stretching.

For athletes who play sports that put the ACL at risk (anything that requires a lot of running, jumping, landing, etc.), plyometric workouts are key. Plyometrics teach proper deceleration, or in other words the correct way to land.

“If you jump to catch a pass [or] take a shot, when you come down is when you’re most likely to get hurt,” says Avella. Kids playing these types of sports are often more at risk for ankle injuries, and should consider wearing an external ankle support to prevent injury (yes, it works better than taping.)

Make sure your kids’ coaches value their players’ best interests over winning.  Be wary of burnout. Make sure she’s not putting in too many hours (rule of thumb: a kid should only play their main sport for as many hours a week as they are old).

“It’s up to the parents and coaches to instill in the athlete that they don’t have to be looked upon as wimps,” says Avella. “If they feel pain…they have to communicate it so it can be addressed.”

Most importantly, don’t try to push kids beyond their limits. “As far as sports go, [kids] need a lot of the same things, just in their own proportions according to size, age and intensity,” says Avella. “Little kids aren’t little people; they’re kids.”

Does your kid play an organized sport?

According to Safe Kids Worldwide, about 62 percent of organized sports-related injuries happen during practice. Follow these tips for injury-free fun on the practice and playing fields:

• Make sure your child gets a physical before starting a new activity.

• Get your young athlete fitted for appropriate safety gear for each sport.

• Pack her a water bottle to prevent dehydration.

• Encourage your kid to speak up if he doesn’t “feel right” after a head bump. Keep your child out of play and seek an evaluation by your pediatrician if a concussion is suspected. The signs can be subtle (nausea, fatigue, memory problems) and may show up days to weeks after an injury.

• Have your child rest on days off to prevent overuse injuries such as tendonitis.

Wellness Wednesday: Wind-Down Yoga with Founder of The NJ Yoga...