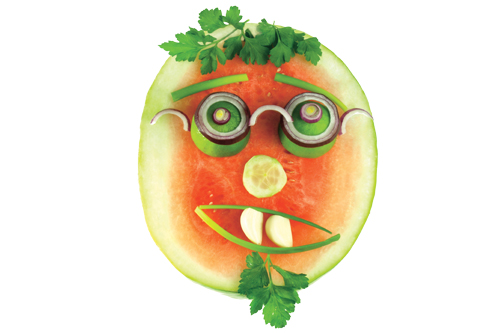 Take a look at your kid and her friends when they hang out. Chances are they influence each other’s behavior, playing the same games, watching the same shows, listening to the same music. Apparently, they also eat the same amount when they’re together, according to studies that reviewed eating behavior when kids ate with friends versus unfamiliar peers.

Researchers at the State University of New York at Buffalo paired 65 kids, ages 9–15, in a room with a friend or a stranger for 45 minutes with puzzles, video games, and their own bowls of chips, cookies, carrots, and grapes: What (or even if) they ate was up to them. The study, reported in the American Journal of Clinical Nutrition, found that while all children snacked more with a friend than a stranger, overweight children, when paired with overweight friends, consumed the most, an average 738 calories versus the 500 calories consumed by healthy-weight kids who ate with a friend, regardless of that friend’s weight.

Friends act like a “permission giver,” says Dr. Sarah-Jeanne Salvy, the study’s lead author and an assistant professor of pediatrics at the university’s School of Medicine and Biomedical Sciences. “It kind of sets the norm for the appropriate amount of eating.”

So should you separate overweight children from their overweight friends when eating? “That would be sad and ludicrous,” says Salvy. “The kids in this study were actually reinforcing each other. So there’s no reason to believe that, if they are eating healthy food, they won’t actually promote healthier eating in each other.” Another reason why isolating kids at mealtime isn’t a solution: A previous study of Salvy’s showed that overweight teens consumed the most when eating alone.

What can parents do to help their children eat healthier in social settings? Ellyn Satter, author of Secrets to Feeding a Healthy Family, says the focus should be on how they got too heavy in the first place. With overweight kids, the biggest mistake parents make is restricting food intake.

“Children who tend to be large alarm parents, and the parents react by restricting their food intake, whereupon the children become food preoccupied and prone to overeat when they get the chance,” Satter says. “When these kids get out from under the parents’ restraint, they tend to eat a lot of whatever food is on offer. But it’s not that they are inherently gluttons.”

Share responsibility.
Satter advises parents to share responsibilities when it comes to food.“The parent’s job is to choose what food to put on the table, what food comes into the house, and all of that,” she says. “Beyond that, it’s the child’s job to decide what and how much to eat from what parents have put before them.”

Help avoid mindless eating.
While Salvy says the entertainment used in her study didn’t affect consumption, other studies have shown that eating while watching television increases caloric intake. Research by the University of Toronto found that kids who watched TV during lunch ate 228 more calories than those who ate without TV. According to Satter, eating while doing other activities messes with our internal hunger regulators and leads to eating incompetence. “They eat without tuning into the process. It’s hard to regulate under those circumstances,” she says.

Watch portion size.
“It’s possible that overweight kids are exposed to overweight serving sizes, so when they are exposed to a normal portion size, they actually intuitively adjust their food intake,” says Salvy, who then challenges parents with the question, “How can you put the responsibility on the child if you provide a boatload of junk food and leave them with their friends?” So don’t.

A study of preschoolers by Cornell University found that portion size largely determines how much a child will eat. To calculate age-appropriate serving sizes, Baylor College of Medicine’s Children’s Nutrition Research Center offers interactive nutrition calculators on its website, bcm.edu/cnrc.

One thing to avoid at the family dinner table: Telling your children to clean their plate. Similar to parents who restrict their child’s food intake when they are hungry, those who force their children to eat what’s before them may interfere with the development of self control that children have around food, according to research by Cornell University.

“When children have little control over what they eat or don’t eat, they may react by acting out and overeating when away from home,” the 2009 study co-author, Collin Payne of New Mexico State University, told ScienceDaily.

Model good eating habits.
In the Buffalo study, kids ate both the junk food and the healthy produce. To get them to go for just the healthy stuff, parents need to go for it themselves. When parents eat more fruits and vegetables, their children do, too, according to separate research by the Saint Louis University School of Public Health and the UCLA Center for Health Policy Research.

Both studies found that if parents eat junk food, their children follow suit. However, while it may be tempting to eliminate that altogether, Satter says that could have negative repercussions. “Don’t go in the direction of trying to strip meals and snacks of all kinds of high-calorie food because kids become preoccupied with that as well and eat as much as they can when they can,” she says.

Instead, help kids keep the day’s food context in mind, Salvy says. “Even if kids were eating one unhealthy meal or junk food with their friends, if the rest of the remaining day is not junk food, it balances.”
In the end, says Satter, helping children make healthy eating choices begins with the most influential “who” in who they eat with: You.