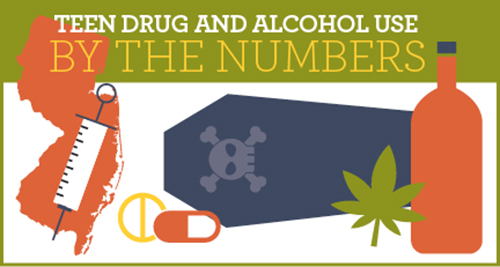 • A report by the Partnership for a Drug Free NJ found that the addiction rate in teens is not affected by whether they live in an urban, rural or suburban community

• The Governor’s Council on Alcohol & Drug Abuse found that NJ has some of the cheapest, purist heroin in the country. A bag of heroin can be bought for as little as $5.

• New Jersey has the sixth highest rate of fatal youth drug overdoses in the country, according to a 2015 report by the watchdog organization the trust for America's Health.

• 15% of NJ teens in grades 9–12 say they drank alcohol for the first time before age 13, compared to 19% of teens nationally, according to the US Department of Health and Human Services