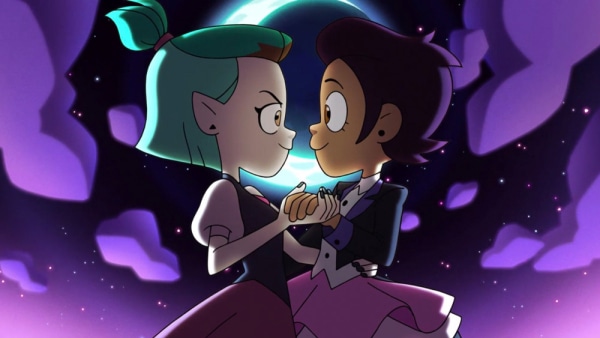 While there have been LGBTQ+ characters in the Disney universe before, they are few and far between, often not acknowledged, usually in minor roles, or in shorts like Pixar’s Out. Now Disney is working on its inclusivity with its new Disney Channel series, The Owl House, where the show’s lead identifies as bisexual.

The animated series follows the adventures of 14-year-old Dominican-American Luz Noceda, an aspiring witch who travels to another world. Luz has shown interest in male characters before but was recently shown in a relationship with Amity, a young woman who she shared a dance with.

The series’ creator Dana Terrace confirmed this budding relationship on Twitter, but the road to getting this character on the air wasn’t simple. “In dev[elopment], I was very open about my intention to put queer kids in the main cast,” tweeted Terrace. “When we were greenlit I was told by certain Disney leadership that I could not represent any form of bi or gay relationship on the Channel.”

“I’m bi! I want to write a bi character, dammit!,” she continued. “Luckily my stubbornness paid off and now I am very supported by current Disney leadership.”

I'm bi! I want to write a bi character, dammit! Luckily my stubbornness paid off and now I am VERY supported by current Disney leadership. (Thank you @NashRiskin and team!) Not to mention the amazingness of this crew.

The series is currently running on the Disney Channel, and you can also watch it on Disney Now.