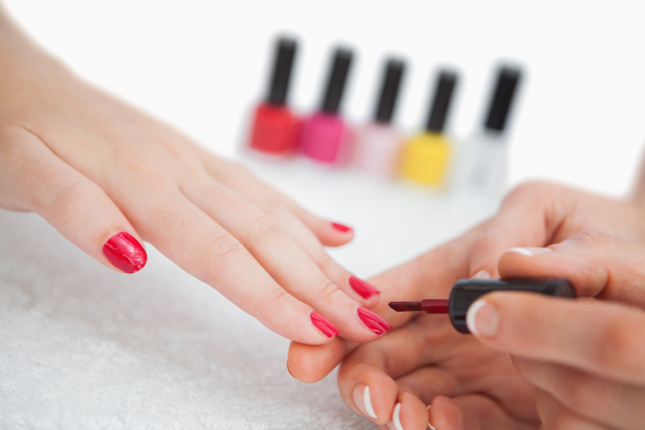 I know there are women who adore having their nails done in a salon. They schedule weekly appointments, lose their minds over the latest color, and pay for monthly ridge-fillings. I am not one of those women. In fact, if given the choice between a long, uncomfortable afternoon at the gynecologist’s office and an hour at a nail salon, I would choose the stirrups. Giddy-up! So imagine my enthusiasm when my sister asked me to join her for a manicure. As her bridesmaid, I couldn’t say no. So I pretended to be thrilled as we entered the nail palace on Friday.

We were greeted by a tiny woman who immediately directed us to our thrones. “YOU. Go to Station Four. Sit down! Sit down! We make you look pretty.” I wanted to look pretty, so I sat down and told the girl I desired gel nails. The trouble was, she didn’t speak any English. And because I’m so brilliant, I thought the best way around this was to speak louder. I also added in gestures, a mime performance, and pointed at pictures. She figured out what I was saying and grabbed my hand firmly.

Quick as lightening she clipped off my three good nails and placed a surgical mask on her face. Then she whipped out the torture devices: Nail files, scissors, power tools (POWER TOOLS!), chemicals, and a dozen, foot-long, fake nails. She was Bill Nye the Science Guy meets Bob Villa. I was shaking. Still, I couldn’t stop her as she grabbed the Dremel and assaulted my hand. I kid you not, there was actual smoke rising from my fingers and, based on the sulfuric burn I was experiencing, my nails were due to spontaneously combust at any moment. I would have run screaming out of there, but the fine particulate matter blinded me to the exit. When the dust did finally settle, my fingers looked like a saw- mill floor. “Go wash your hands and come back” she ordered. I sheepishly complied.

I would have run screaming, but the fine particulate matter blinded me to the exit.

Clearly suffering from Stockholm Syndrome, I gave her my hand once again and she glued on the plastic talons. In a fog, I vaguely remember her brandishing the dreaded, enormous nail file. Like a maniacal lumberjack she sawed back and forth on my nails, hitting speeds upwards of 185 mph! It hurt so intensely that I pulled back my hand and made an ouchy face, hoping she would cease and desist. Yet my reaction set off a horrible cosmic chain of events…

After my pain-filled pantomime, my manicurist began ranting forcefully, in her native tongue, to her coworkers. I am a woman, so I am an expert in translating the universal language of back-stabbing—my manicurist was nailing me! But what could I do? So I just sat there as she paused every few minutes to smile at me…as if I was entirely unaware of what was really going on. But OH, I knew! Nevertheless, my fingers were in her hands, so I took the obvious affront and sucked it up, along with the toxic fumes. By the time she was done, I was wasted. I know this because when she placed my hands into the miniature UV tanning beds, I actually felt relaxed. And, once my new nails hardened, I was finally free. Or was I?

I immediately found out my fancy hands were now as useful as a box of hair. The long, thick nail-prosthetics I just had installed hindered my every move. I fumbled to get my keys out of my purse and could barely open my car door. It took me a full 15 minutes to text my husband and another three to start my car. And, going to the bathroom? Fuhgeddaboudit. Imagine zippering up your pants with wine corks super-glued to your fingertips. And did I mention the noise? As I type this, it sounds like 10 million pens are tapping furiously on a desk…in a cave!

Of course, about three weeks from now, a chip will cause me to obsessively and furiously dismantle these plastic pretties. One by one, I’ll liberate each finger from its nail jail, probably breaking a tooth in the process. My cuticles will shiver from the jolt of oxygen and I will be left with the stumpy hands of a third-grader once more. But I won’t care, and neither will my gyn.

The next time someone tries to rope me into getting a manicure, I’m telling her I have a previous appointment with some stirrups. At least I know what I’m getting myself into when I go there!