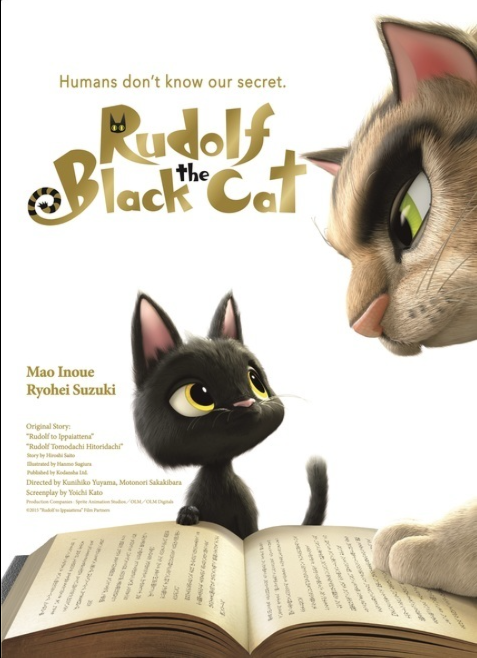 Skip your local AMC and head to the city for an entirely new world of culture and cinema—Whether they like live-action, animation, short films or documentaries, the New York International Children’s Film Festival is the largest film festival in North America and has movies for kids 3–18 years old.

The festival runs from February 24 through March 29, and screens at five venues throughout NYC on Saturdays and Sundays. Tickets are $13–$16 per movie ($10 for groups of 10 or more). View the film lineup and purchase tickets at nyicff.org

Learn how animation goes from inspiration to sketch to screen from the filmmakers themselves  in this special panel presentation. Directors Mark Osborne (The Little Prince), Elizabeth Ito (2017 short in competition Welcome to My Life), and Rawan Rahim (2016 Festival short Lilou) will share excerpts of their films, discuss their inspiration, and demonstrate how they create their dynamic work through sketches, story boards and stop-motion models.

Day My Father Became a Bush

Ten-year-old Toda lives an idyllic life with her baker father, concocting sweet confections to the delight of their town. But when her father is drafted to join the war between the “Ones” and the “Others,” their tranquil existence is upended. With her father gone and war dangerously encroaching on their town, Toda must make the secret trek to her mother’s home across the border. Along the way, she meets corrupt officials, narrow-minded neighbors, sketchy smugglers, and—luckily—friend and fellow refugee, “Stickie.” In Dutch with English subtitles.

BIG MOUTH
Animation, Andrea Dorfman, 2012, 8 min
While Trudy discovers that her big mouth can sometimes get her into trouble, she learns that it's also what makes her special.

THE FOX AND THE CHICKADEE
Animation, Evan DeRushie, 2012, 7 min
A starving fox meets a cunning chickadee, and together they discover that teaming up could help fulfill both of their goals. But can these two very different creatures trust one another for long enough to get the job done?

LUNA
Animation, Donna Brockopp, 2011, 7 min
One fateful night a larva falls in love at first sight – but can a flamenco dance woo the beautiful Luna moth?

MONSTERS
Animation, John Martz, 2012, 2 min
These dapper, dancing robots show off their moves and grooves in this catchy animated music video that's sure to get your feet tapping.

NORMA’S STORY
Animation, Alex Hawley, 2015, 6 min
This film tells the true story of Norma, who has experienced dramatic changes in her way of life over just a few decades due to the impact of climate change on the wildlife that sustains the Gwich'in First Nation and other northern Canadian communities.

THE ORPHAN AND THE POLAR BEAR
Animation, Neil Christopher, 2013, 8 min
A compassionate polar bear adopts a young boy and teaches him the skills he needs to fend for himself, in this gorgeous animation based on traditional Inuit folktale.

SAINTE BARBE
Animation, Cederic Louis and Claude Barras, 2007, 8 min
In this expressive puppet animation from acclaimed director Claude Barras (My Life as a Zucchini), we meet little bald Leon, who loves his grandfather's big, bushy beard, even before he discovers that his favorite facial hair has magical powers.

A SEA TURTLE STORY
Animation, Kathy Shultz, 2012, 9 min
The life cycle of a sea turtle is explored in this stunning animated film introducing concepts such as the food chain, predatory animals and the nature of marine life.

SOUP OF THE DAY
Animation, Lynn Smith, 2013, 4 min
If you've ever faced the dilemma of dining out with a picky eater, you'll appreciate this rollicking doo-wop-driven short about the merits of the soup of the day.

THE SWEATER
Animation, Sheldon Cohen, 1980, 10 min
When hockey rivalries reign supreme, Roch Carrier recounts the day when he must face his friends who are die-hard Montreal Canadiens fans…. in a Maple Leafs jersey!

Renowned animator Michel Ocelot (Kirikou and the Sorceress) originally conceived of this enchanting collection of fairy tales in his signature silhouette style of animation as a series related to past Festival feature Tales of the Night (NYICFF 2012). A master projectionist and his two assistants bring life to four magical tales. Stories of a shape-shifting princess, a cat whose natural ability seems supernatural to some, a girl who learns to harness—not hide from—her fears to fight the most daunting of beasts, and a boy tempted by the promises of a sorcerer are full of rich imagery, plot twists, and charming characters. As always, Ocelot’s illustrations provide a stunning platform to explore the very art of storytelling. In French with English subtitles.

Lake District, England. 1935. The four Walker children have finally convinced their parents to let them set off on their own for a sailing adventure during summer vacation. Their summer of freedom quickly turns into a fierce turf war when they learn their island camp has been claimed by the boisterous Amazons, and find themselves caught in the midst of some nefarious international intrigue that’s landed in their sleepy byways. Based on the beloved English novels by Arthur Ransome, Swallows and Amazons is filled with dramas big and small—from a capsized picnic basket to a Russian spy campaign—that come together to create a fluidly captivating story of bravery set against the languorous beauty of the English countryside. In English.

When an accident leaves Ursli and his family without their annual harvest, they must strike a deal with a wealthy merchant in order to survive—including giving up Ursli’s beloved goat, Zila. At least there’s Chalandamarz, the end-of-winter festival, to look forward to. Ursli is sure he’ll receive the best of the traditional bells given to all the local boys. When this, too, is taken by the merchant and his equally greedy son, it takes Seraina, a brave girl, to help him stand up for himself and set things right. Adapted from the iconic Swiss novel “A Bell for Ursli,” this fable is a serenade to a just, natural world filmed amidst the breathtaking beauty of the Alps. In Swiss German with English subtitles.

Sita wants nothing more than a little quality time with her mother, who is often busy tending to the (literally) ruffled feathers of her patients at the local veterinary clinic. Yet it’s her mother’s expertise that instills in Sita a love and understanding of the animal kingdom that she’s eager to share in her upcoming school report on amphibians. Curiously, whenever she utters the word “frog” in the classroom, her teacher goes a bit green at the gills and disappears—a problem considering the unconventional educator is being monitored closely by the strict principal. Based on a story by best-selling author Paul van Loon, this charmingly quirky tale infuses its rustic setting with subtle fantasy to portray a group of students who stand steadfast by their beloved teacher no matter where—or in what form—he hops. In Dutch with English subtitles.

Rudolf enjoys a life of comfort and care in Gifu, Japan. Yet true to the adage, curiosity gets the best of the kitten, and he decides to explore beyond the four walls of his home. When he’s inadvertently whisked into the back of a cargo truck and lands in Tokyo, he befriends Gottalot, a seasoned street cat who possesses a crucial and unusual skill that will help him find his way home: the ability to read the human language. Rudolf’s journey is rich with Japanese culture, and his story celebrates the wonder of discovery—that magical moment when you realize you have the key to unlock the world. In Japanese with English subtitles

Short Films One (recommended for ages 5–10)