Before we wore masks all the time in public, I used to be that mom who put on red lipstick, even for school pickup. Becoming a parent didn’t mean I stopped caring about my appearance – in fact, in many ways it was more even more important for me to do little things for myself to feel good (like put on makeup) when my life had suddenly become all about raising twins.

One day, pre-COVID, I rocked my favorite shade – crushed rubies – to get my son from school one afternoon and was caught off guard by a question from one of his classmates. 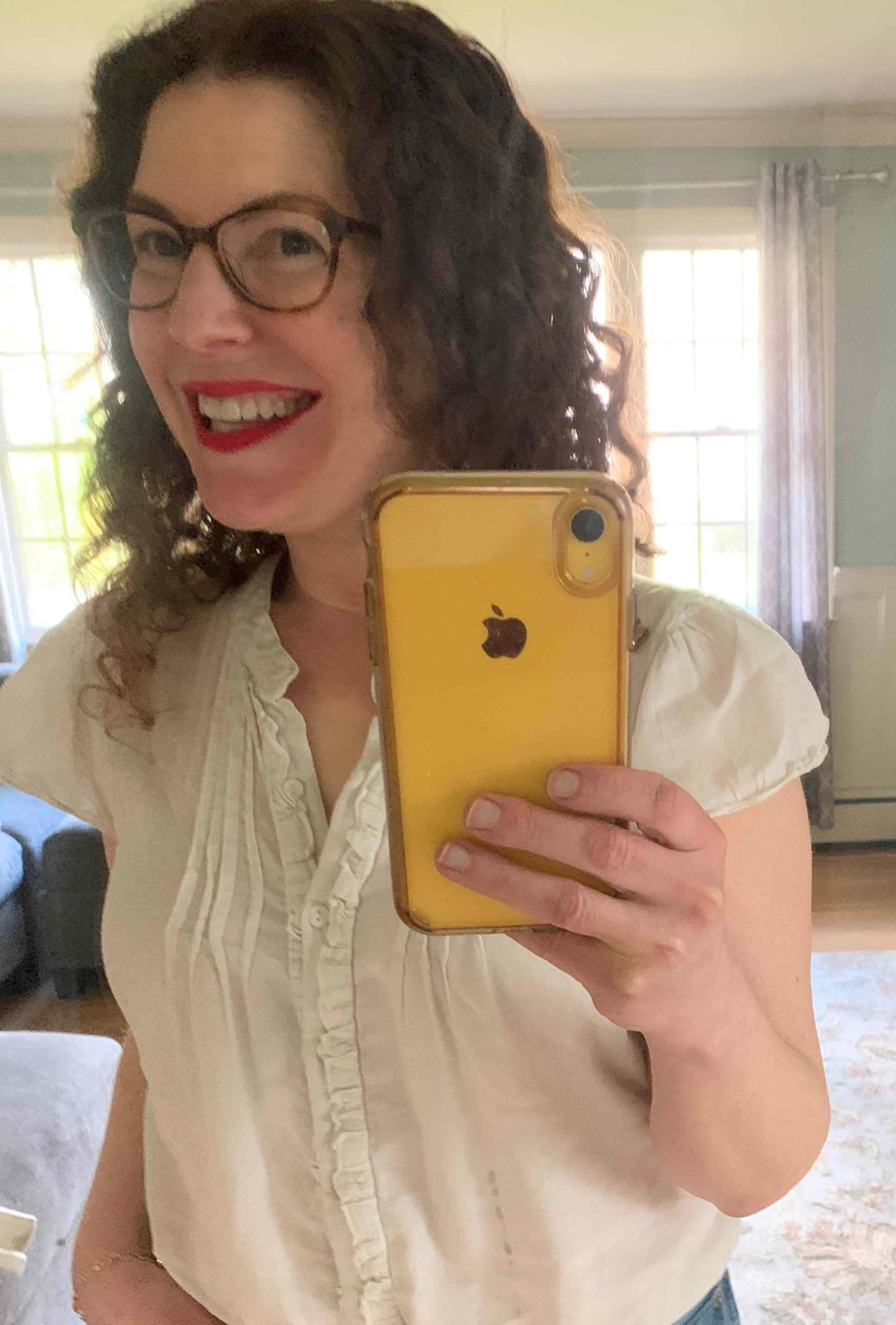 “Why do you have a blue tooth?” a girl asked, looking at me head-on and no, unfortunately, she wasn’t talking about wireless technology. I explained that I had once had a root canal on my central incisor and, over time, that may have caused some discoloration. The kid looked disinterested in my bumbling explanation, my son’s teacher who had overheard the whole thing looked embarrassed, and all I wanted to do was hide my hideous teeth from the world.

As an adult, I’ve come to accept and genuinely love most things about my looks. But this child’s comment had seriously shaken my confidence.

Later that night, I scrolled through Facebook and there it was in almost all recent pictures – a discoloration that I had told myself my top lip covered, but was now starring me in the face like clues from an M. Night Shyamalan movie once you know the ending. I had never thought of myself as someone who would get cosmetic dentistry, or any type of cosmetic procedure, for that matter, but now I knew I wanted it fixed.

I didn’t want a blindingly white, Hollywood smile, so I decided to first visit my family dentist. He offered an appealing solution – internal tooth bleaching. After three rounds of having bleach inserted into the tooth, I noticed that the discoloration was almost gone! It seemed like my problem was solved until one night I bit into a baguette and – crack! My weakened tooth was hanging by a thread. The next morning, the dentist took off the front of the tooth and gave me a temporary crown. When he handed me a mirror, I gasped at the giant Chiclet starring back at me.

It amazed me how much a little thing like a tooth changed my whole outlook. I didn’t want anyone to see it, so much so that I actually considered canceling a gathering with my closest friends. We still got together, and they told me it really wasn’t that noticeable. (Yes, it was.)

But when my permanent crown finally arrived and the family dentist fit it into my mouth, I was unable to hide my disappointment. It looked glaringly unnatural – a beacon of fake-looking white next to my other not-so-white teeth. The next day I placed a call to Dr. Michael Apa, the best cosmetic dentist in the business.

Dr. Michael Apa’s Manhattan office looks like a spa with state-of-the-art tools and an in-house ceramics lab. Dr. Apa’s Instagram page showcases his astonishingly natural looking before and afters and with offices in NYC, LA and Dubai, he’s known for doing the smiles of celebs. At my first appointment, Apa’s team took what felt like a million X-rays of my teeth, followed by a series of photographs. When my smile was projected onto the screen next to the chair where I sat, I was disconcerted to say the least – there was my fake-looking crown, flanked by mismatched little incisors. It was strange to see my flaws so close up, but I steadied myself, knowing it was all with the purpose of achieving a great end result.

Dr. Apa introduced himself and quickly gives me the bad news – the crown on my front tooth was a bad fit and it was decaying (ew). The only option was to remove the tooth entirely and place a dental implant.

When Dr. Apa pulled up the picture of my smile on an iPad and drew on my teeth with a smart pen, showing me how he would enlarge my smaller, discolored lateral incisors with veneers, thin porcelain shells that go over the existing teeth, I could instantly see his artistic vision. I scheduled my appointment for the implant with Dr. Apa’s right-hand man, periodontist Dr. Graig Fischgrund, knowing that I was in the right place.

On the day of my first procedure, my old crown (and entire remaining front tooth) was removed, and a dental implant was placed. Thankfully, I was able to leave that day with temporaries on the implant and the three other neighboring top teeth that already made my smile look more natural than anything I’d been sporting. Over the next few months, I was careful not to bite down on my front teeth so that the implant could fuse to the bone before the permanent crown and neighboring veneers were placed. At the appointments that followed, Dr. Apa and his team took tons of pictures, X-rays and molds, checking the color of the veneers they had hand-made specifically for me to make sure they looked not only beautiful but natural next to my other teeth.

By the time the permanent porcelain veneers were placed, my confidence had already skyrocketed – I was smiling with teeth in photos again and even taking selfies. Amazingly, my teeth looked like they had always been this way – they were perfectly sized to fit my facial features and white but not too white. When I came in for my “after” pictures, Dr. Andi-Jean Miro who had seen me throughout the process noticed my red lipstick – yep, the crushed rubies were back, and so was my confidence!

And then just when I was really feeling myself, the pandemic hit and just like that, my brand-new smile was now hidden behind a mask. At first, I lamented the fact that I had gone through this long and sometimes painful process to fix teeth that now no one would see but then I realized something amazing. Even while out in public with my mouth covered, my confidence was still shining through. Changing this aspect of my appearance wasn’t something I did for anyone else but me. It was an external transformation that had truly led to an internal one. Even if no one could appreciate my pearly whites, I was still moving through the world in a different way – confident, happy and self-assured that I had made a decision that went way beyond surface appearance.

So mamas, whether it’s putting on makeup, or pants for your Zoom meeting or even changing something about your looks that’s bothering you, I say don’t wait for when the world will see it. If it makes you feel confident and beautiful, then do it for you!