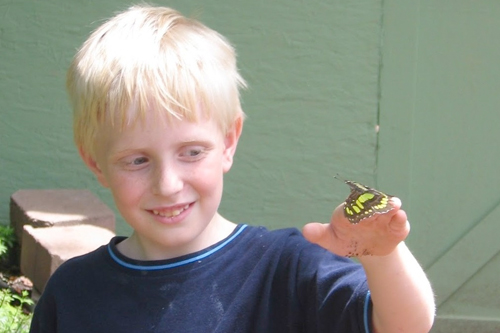 In kitchens and coffee shops across the country, we tearfully debate the many faces of violence in America: gun culture, media violence, lack of mental health services, overt and covert wars abroad, religion, politics and the way we raise our children. Liza Long, a writer based in Boise, says it’s easy to talk about guns. But it’s time to talk about mental illness.

Three days before 20 year-old Adam Lanza killed his mother, then opened fire on a classroom full of Connecticut kindergartners, my 13-year old son Michael (name changed) missed his bus because he was wearing the wrong color pants.

“I can wear these pants,” he said, his tone increasingly belligerent, the black-hole pupils of his eyes swallowing the blue irises.

“They are navy blue,” I told him. “Your school’s dress code says black or khaki pants only.”

“They told me I could wear these,” he insisted. “You’re a stupid bitch. I can wear whatever pants I want to. This is America. I have rights!”

“You can’t wear whatever pants you want to,” I said, my tone affable, reasonable. “And you definitely cannot call me a stupid bitch. You’re grounded from electronics for the rest of the day. Now get in the car, and I will take you to school.”

I live with a son who is mentally ill. I love my son. But he terrifies me.

A few weeks ago, Michael pulled a knife and threatened to kill me and then himself after I asked him to return his overdue library books. His 7 and 9 year old siblings knew the safety plan—they ran to the car and locked the doors before I even asked them to. I managed to get the knife from Michael, then methodically collected all the sharp objects in the house into a single Tupperware container that now travels with me. Through it all, he continued to scream insults at me and threaten to kill or hurt me.

That conflict ended with three burly police officers and a paramedic wrestling my son onto a gurney for an expensive ambulance ride to the local emergency room. The mental hospital didn’t have any beds that day, and Michael calmed down nicely in the ER, so they sent us home with a prescription for Zyprexa and a follow-up visit with a local pediatric psychiatrist.

We still don’t know what’s wrong with Michael. Autism spectrum, ADHD, Oppositional Defiant or Intermittent Explosive Disorder have all been tossed around at various meetings with probation officers and social workers and counselors and teachers and school administrators. He’s been on a slew of antipsychotic and mood altering pharmaceuticals, a Russian novel of behavioral plans. Nothing seems to work.

At the start of seventh grade, Michael was accepted to an accelerated program for highly gifted math and science students. His IQ is off the charts. When he’s in a good mood, he will gladly bend your ear on subjects ranging from Greek mythology to the differences between Einsteinian and Newtonian physics to Doctor Who. He’s in a good mood most of the time. But when he’s not, watch out. And it’s impossible to predict what will set him off.

Several weeks into his new junior high school, Michael began exhibiting increasingly odd and threatening behaviors at school. We decided to transfer him to the district’s most restrictive behavioral program, a contained school environment where children who can’t function in normal classrooms can access their right to free public babysitting from 7:30-1:50 Monday through Friday until they turn 18.

Read more at The Blue Review