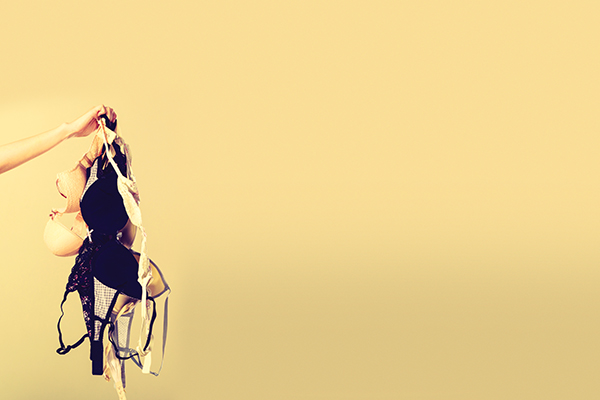 Feel like you’ve been hunting for the perfect bra but still haven’t found the holy grail fit that lifts and flatters while still feeling comfortable? You’re not alone, according to stats that say a whopping 80 percent of us are wearing the wrong bra size.

It’s something pro bra fitters see every day. “The majority of women who come into our lingerie shop are either not wearing the correct size or their current bra is just not giving them the support they need,” says Gilly Hailparn, owner of Galatea in Hoboken. So, what has 80 years of combined bra fitting experience taught three New Jersey pros? Read on for their advice.

Being fitted by a professional might be the most life-changing five minutes you’ll ever spend shopping, but if you want to get your basic measurements locked down at home, grab a soft tape measure and do a little basic math. Here’s how:

To find your bra band size, measure around the ribcage just under your breasts, pulling the tape snug. If you get an odd number, add 5. For an even number, add 6. The sum will be your bra’s band size, so if your ribcage measures 32, you’ll add 6 to get a bra band size of 38.

“Measuring gives us a start, but the results don’t necessarily mean that’s your size,” says Susan Barness, proprietor of Lingerie by Susan in Edison, who emphasizes that the tape measure just provides a baseline. Here’s what you should know when trying on a bra:

bras are mostly supported by the band—not the cup or straps,” says Hailparn. “That’s why it’s so important to make sure the band of your bra is fairly snug, but not so tight that you have indentations or red marks when you take it off.” To find your Goldilocks fit, slip two fingers into the back of the band when fastened on the loosest hooks and pull. “If it’s too snug, the band really won’t ‘give’ much, and conversely, if you can pull a lot of band out with those two fingers, you should probably try going down a band size.”

Just like a pair of shoes, bras stretch out from wear over time—and that’s where those little rows of hooks at the back come into play. “You want to start off on the loosest hooks first,” says Hailparn. “After a couple months as the bra stretches, you might move to the middle hook. And once a bra is on the tightest hook, a bell should go off in your head that it’s almost time to go bra shopping again.” One place never to start: the tightest hook. “If you go straight to the [tightest] hook then there’s no place to go when the bra stretches out, so you don’t have the life out of the bra that you should have,” explains Barness.

“You know you have the wrong cup size if you put a shirt on and see bulges and lumps,” says Barness—whether they’re from a too-small cup that causes spillage over the top or loose fabric from a too-large cup creating telltale wrinkles under your clothes. “Even a slight overflow will put somebody in a different cup size,” adds Hailparn.

While underwires seem like medieval torture devices, they should actually lend comfort and lift to your bra as long as you’re wearing the right size. “The underwire should be flat on the ribcage and should make the full circle underneath the breast. It should never, ever cut into the breast,” says Barness. Be sure that yours fully touches the area between your breasts, lying flat against the sternum. If it pulls away, the underwire is too small. If you remove your bra at night and see indentation marks, your underwire isn’t sitting properly, which leads to less lift and way less comfort.

“Bra straps are the very last thing you should adjust on your bra,” says Hailparn. As a general rule of thumb, if you’re above a C, go with wider straps. A red flag that you’re wearing the wrong straps: indentations on your shoulders, which means they’re probably too thin or supporting too much weight from your breasts. Slipping off your shoulders means you don’t have them tight enough in the back. “Many women have one breast that’s slightly larger than the other, and you always want to fit the bigger breast,” says Hailparn. After that, you can adjust the strap of the smaller breast to lift and compensate.

After you’ve found ‘the one,’ you’ll want to road test by putting on a tank top to highlight any hidden fit issues such as bulging at the top, in the back or by the armpits. Another test: “A wonderful rule of thumb is if you bend your elbow at the side of your body, your apex of your bustline should be halfway between the top of your shoulder and bottom of your elbow,” says Cathy Earnhardt, owner of The Dain Shoppe in Morristown.

“Almost all bra fitters will tell you to alternate your bra every two or three days to help keep them in the best shape possible for as long as possible,” says Hailparn, who also recommends washing them by hand or placing them in a bag to wash on a delicate cycle. And never, ever toss a bra in the dryer, since just a single tumble in high heat can destroy its elasticity.

Katharina Lyklar has been writing about beauty and style for 15 years. She lives and works in New York City.