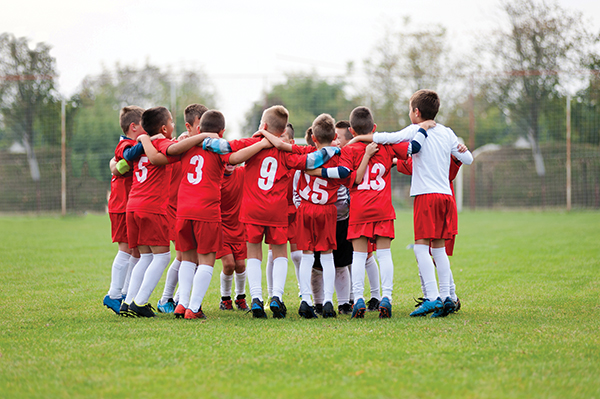 It’s hard to remember a time when my son wasn’t kicking a ball. Soon after he learned to walk, he learned to kick…every ball in sight. Fast forward nine years and his obsession has evolved into dribbling, juggling and shooting. This kid lives and breathes soccer, so when he asked us if he could try out for a club team, we knew he was ready. But we weren’t so sure we were. Club sports are a big investment of your family’s time, money and emotions. If you’re considering club soccer for your kid, here’s what you should know.

TRYOUTS ARE COMPETITIVE, AND IT’S NOT A GIVEN YOUR KID WILL MAKE IT.

My son asked to try out two years ago after a couple of friends left our town travel team to join clubs. He tried out for two teams and made it onto one, but it wasn’t the team close to home (trust me, this matters). From then on, he was determined to train hard so he could earn a spot the next year, and he did. Even after your kid makes the team, he’ll need to try out once a year to stay with the club. So, make sure to manage his expectations.

SHE HAS TO REALLY WANT TO PLAY FOR A CLUB.

Early morning games, late night practices and intense coaching are not things you can force on your kid. In the end, she’s the one who has to put the work in, so it has to be something she wants, not something she’s doing to make you happy. Some clubs won’t allow your kid to play for other soccer organizations, so make sure she knows she won’t be able to play with town friends anymore. If her heart isn’t in it, the experience will be brutal for everyone.

IT’S NOT CHEAP, BUT YOU GET A LOT FOR YOUR MONEY.

My son’s club charges $2,550 for the year, which pays for lots of high-level training and coaching. Many clubs offer scholarship opportunities to help offset fees. Annual tuition doesn’t include uniforms, so once you buy training gear, extra socks and a team jacket, you’re in for another $500. Then there’s the occasional travel to tournaments, which means paying for hotels. And your kid will need new cleats, plus turf and futsal shoes.

Count on taking your kid to at least three practices a week and a weekend game. Practices can run until 9 pm on school nights. Some will be on Saturdays at 3 pm, so forget making plans. Games can be early, too, like an 8 am match an hour away, which means leaving the house at 6 am. Plan on at least a few tournaments per season. You’ll want to meet other parents and make friends—carpooling will be a lifesaver.

THE LESSONS YOUR KID WILL LEARN GO FAR BEYOND THE FIELD.

Joining a club team means your kid will exit her comfort zone of playing with local buddies in town. It’s a great opportunity to meet new people, forge new friendships and learn to play well with others. Your kid may be intimidated by those who play at a higher level, but it’ll reinforce her commitment to working hard. She’ll learn to win and lose well, and build the resilience needed for all of life’s challenges.

YOU’LL COME ACROSS PARENTS WHO CAN BE…A LITTLE INTENSE.

Of course, this isn’t exclusive to club sports. There’ll always be loud parents who let their emotions get the best of them during games. They’ll have lots of opinions, and you’ll hear them pretty clearly. Just as your kids learn to get along with others, so will you. And when you’re tempted to give your own opinions, remember that you’re a parent, not the coach. Your job is to be your kid’s biggest fan. He puts enough pressure on himself, so don’t add to it. Leave the critiques to the coach.

After months of spending a couple hours a day several times a week playing with the same group, your kid will develop a special closeness with his teammates. You’ll witness how much these kids have each other’s backs, and you’ll be most proud when you see your kid cheer on his buddies and give them pep talks when they need them most. You may get a little verklempt when they do the same for your kid. The best teammates want the same amount of light to shine on everyone.

COACHING WILL BE MORE INTENSE THAN YOUR KID IS USED TO.

Coaching gets more technical and your kid will learn plays like give and gos, diagonal splits and offside traps during training. He may sometimes get homework like identifying a challenge on the field and describing how he overcame it, or analyzing plays after watching a pro game. Radical candor will be your coach’s MO, and there’s no sugarcoating missed opportunities. But his coach will also celebrate great execution, and your kid’s confidence will soar when he hears positive feedback.

HE’LL GET EMOTIONALLY INVESTED, AND SO WILL YOU.

Being on a team that plays together so often feels like a brotherhood for my son. Tournaments are especially high stakes. His team played at a weekend tournament at Fort Dix in Lakehurst last year. They won three games to make it to the final, which was a nail-biter that went into penalty kicks. It was a tough way to lose (and tears were shed), but it was also a great lesson in being a good sport.

DON’T BANK ON A COLLEGE SCHOLARSHIP.

Sure, club soccer is high level, but there are lots of clubs across the state and country playing at that level, too. As kids get older, very few go on to academy soccer, a precursor to college-level play. Even fewer will play Division I college ball or be accepted to Olympic development programs.

IT’S ALL WORTH IT.

The return on investment of time and money is huge, and the friendships and memories are priceless. And that doesn’t just go for club sports…it applies to all team sports—rec and travel. So, when you’re feeling run down from the schedule and nonstop driving, remember that one day, you’re going to miss watching your kid play. And in the end, every parent in the world of team sports wants the same for their kids—to have fun playing a game they love.

Dina El Nabli is the editor of New Jersey Family. She’s outnumbered by a husband, son and daughter who play soccer.