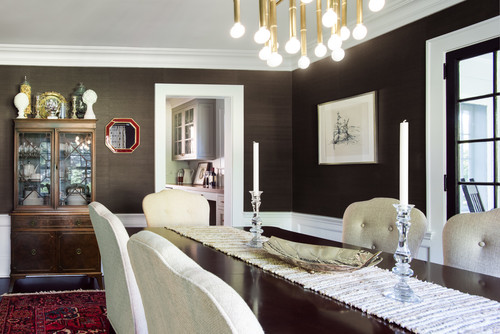 The myriad choices and decisions that come up during even the smallest of remodeling projects are enough to flummox the average homeowner. So you’d think being an interior designer would make things easier. Well, it’s not so simple. “I’d say there are just as many pressures, or maybe even more, when you’re a designer making decisions for yourself,” says interior designer Ali Qualy, who recently renovated her New Jersey home with new furnishings and an 800-square-foot addition. “Designers have so many options at our fingertips.”

Last year, Qualy found herself both designer and client when she and her husband, a director of advertising for a digital advertising company in New York City, expanded and remodeled their home.

When the couple bought the 1929 house last year, they knew it had good bones, but they felt it was a little small. The plan was to seamlessly expand it for modernity’s sake while simultaneously creating a home to suit a busy family of four.

To capture the concept they wanted, the couple enlisted the help of architect Mike Sweebe of Cedar Grove and RTH Builders in Montclair to enlarge the first-floor footprint with a rear addition. And Qualy sought the opinions of her Roost Interiors partner, Kasey Hodgson, who helped her with the aesthetics of the furnishings and accessories.

First on the list was to leave the entry, formal living and dining room footprints as they were, along with their exquisite moldings, but to revamp the rooms with a family-friendly vibe that would extend throughout the first floor. 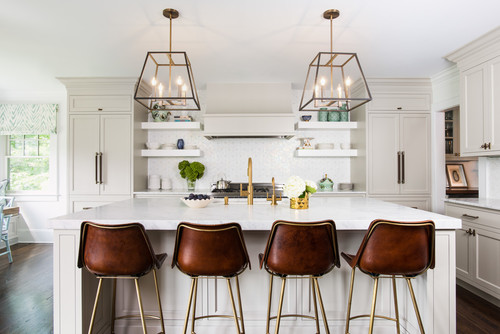 Dark grasscloth wallpaper pairs nicely with the existing dining table and chairs and an antique rug. The antique china cabinet, found in Brooklyn, and the metal bar strike a balance between elegance and functionality.

Qualy gutted the kitchen and added an 800-square-foot expansion to the rear of the home that includes the new kitchen, a breakfast nook, family room and mudroom.

Sleek and functional cabinet panels cover the dishwasher and refrigerator. An appliance cabinet discreetly houses the coffeemaker, toaster and microwave.

The same holds true in the breakfast nook, where the green hue of the Roman shades stands out against a neutral backdrop. Brass legs are repeated on the table, which is topped with mango wood and surrounded by vintage chairs that were repainted and re-covered in a wipeable vinyl fabric. “They work perfectly since I have two little girls,” Qualy says. 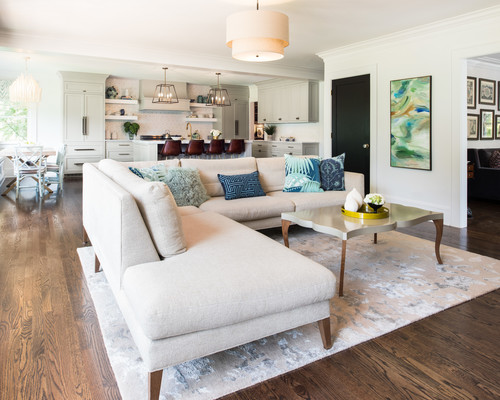 The open profile continues in the adjacent family room, a breezy and comfy space that Qualy envisioned as a favorite hangout for her family. The room features a sectional, enamel coffee table, flat-screen TV and a bank of windows that flood the space with natural light. Pillows in shades of blue and a bold abstract painting by Qualy add color and interest. 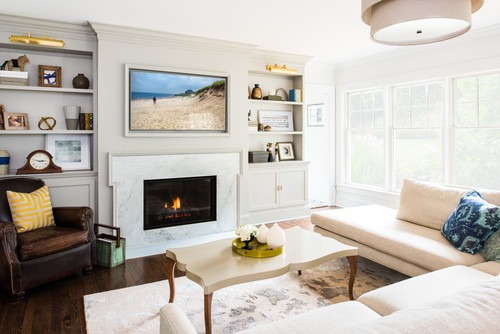 The TV hangs above the gas fireplace, which has a Carrara marble surround. Qualy decided to incorporate custom-made, traditional-style built-ins that highlight personal keepsakes, such as family photographs, a Zoe Bios print, a Jonathan Adler vase and a mantel clock given to the couple for their first anniversary by Qualy’s parents. 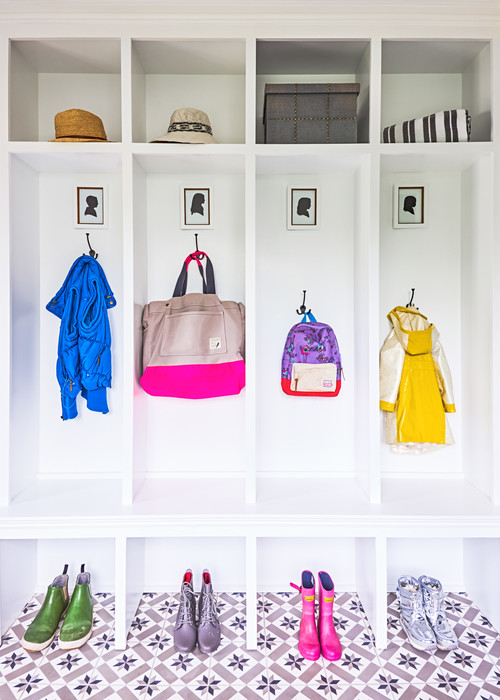 The new addition also features a mudroom with cubicles for each family member. “I think this is my favorite part,” Qualy says. “There’s a place for all the coats, packages and backpacks to go.”

The powder room, which sits between the entry and kitchen, has Kohler fixtures, black and white wallpaper and a watercolor of a vibrant green palm.

Qualy reconfigured two bedrooms into a new master en suite on the second level. She set the stage with the Carrara marble flooring in a herringbone pattern and a quartz-topped, custom-made vanity in greige. But the real star is the walk-in shower with brass fixtures and black aluminum door and divider. 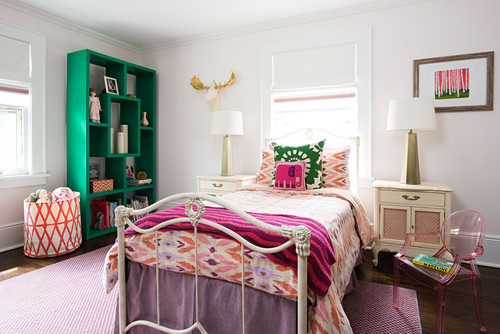 The bedroom of the couple’s 6-year-old daughter has two antique nightstands with pink and white fabric inserts crafted by Qualy and a white iron bed, all passed down from Qualy’s family. A pink Ghost chair adds more character. Memorabilia and keepsakes sit on a green custom-made bookcase.

Details like the pullout step stool, neatly hidden at the bottom of this custom-made vanity in the 2-year-old’s bathroom, set the home apart.

Qualy says one of the benefits of being a designer is that you have to keep on top of the trends for your customers, which came in handy for her own project. “While I would be shopping for a customer, I would be thinking, ‘I can use that, too,’ ” she says.