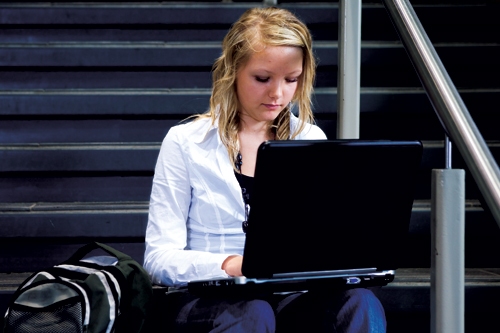 "Mirror, Mirror, on the wall, is this who I really am at all?”

If the person in question is a teenage girl, the answer is: not exactly, according to a new nationwide survey by the Girl Scouts of the USA. The survey finds that, as a result of increased exposure to social media, a teenage girl’s image isn’t always what it seems. In fact, nearly 74 percent of girls believe other girls their age use social networking sites to make themselves “cooler than they really are.”

The survey, which included more than 1,000 girls ages 14 through 17, finds girls downplay several positive characteristics of themselves online, most prominently their intelligence, kindness, and efforts to be a positive influence. In person, girls say they come across as smart (82 percent), kind (76 percent), and a good influence (59 percent), whereas online, girls consider themselves fun (54 percent), funny (52 percent), and social (48 percent).

“Adults and teens alike need greater understanding about the ways girls represent themselves and communicate on social networking sites,” says Kimberlee Salmond, senior researcher at the Girl Scout Research Institute. “If girls are portraying themselves differently online than they are in person, this can impact their identity, sense of self, and relationships.”

The survey also indicates a majority of girls understand their emotional safety and reputations are at risk online, yet 50 percent admit to not always being as electronically careful as they should be. Sixty-eight percent have had a negative experience on a social networking site, such as having someone gossip about them or being the target of a bully. And many girls are concerned that they won’t get into their college of choice (42 percent), will miss a job opportunity (40 percent), and will get into trouble with parents and teachers (40 percent).

In contrast, the vast majority of girls prefer face-to-face communication. Ninety-two percent would forego all their social networking friends if it meant keeping their best friend.

For more information about the findings, go to bit.ly/GirlScoutsStudy.