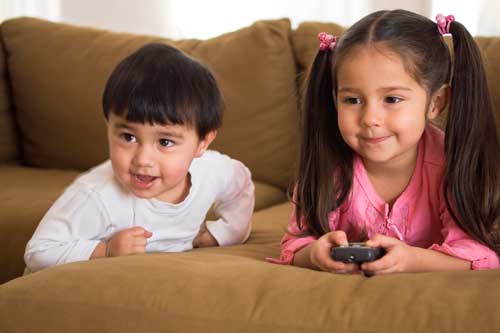 Common Sense Media released a report, Zero to Eight: Children’s Media Use in America. Here’s what they found:

Of all children who have used a computer, the average age at first use was just 3-1/2 years old.

There is a digital divide, including both computers and mobile devices.

Children under 2 spend twice as much time watching TV and videos as they do reading books.

In a typical day, 47 percent of babies and toddlers under age 1 watch TV or DVDs, spending an average of nearly two hours per day doing so.

Children under 8 spend an average of nearly two hours watching TV or videos in a typical day. They spend, on average, about 30 minutes each reading, listening to music, and playing computer or video games.

Broadcast television is the most accessible and widely used platform for educational content among lower-income children.

Media use varies significantly by race and socio-economic status, but not much by gender.

The only substantial difference between boys’ and girls’ media use is in video games. Boys are more likely to have ever played a console video game than girls. Boys average 16 minutes per day playing games, compared to an average of four minutes a day for girls.

Even some young children are media multi-taskers.

16 percent of children under age 8 use more than one media “most” or “some” of the time.