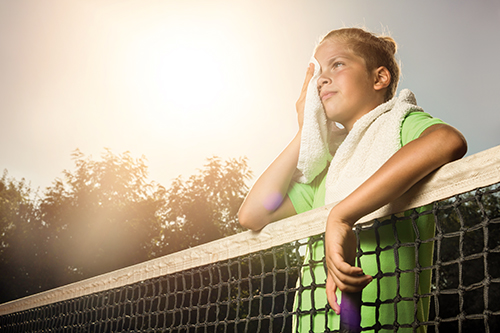 We love watching our kids excel in the sports they love. We want them to hustle, be aggressive and rise above the competition. So much so that we sign them up for travel teams, private clubs, specialty camps and training clinics. With hard work and a year-round focus, they’re bound to stand out, right?

Maybe, but it’s far more likely they’ll get hurt or burn out before high school or college if they stick to just one sport. “Many parents feel if their kid doesn’t focus on a sport early in his career, he’s going to pass up the chance to make his high school team later down the road, and that’s simply not true,” says John P. DiFiori, President of the American Medical Society for Sports Medicine and head team physician at the David Geffen School of Medicine at UCLA.

Kids who begin specializing in a single sport as young as seven are more likely to get hurt than those who play multiple sports, according to a 2016 study out of the University of Texas. “Kids are sustaining way more injuries, especially ones due to overuse and overtraining, compared to kids 20 years ago,” says Joel Brenner, MD, former president of the American Academy of Pediatrics Council on Sports Medicine and Fitness. “I see these kinds of injuries in almost every sport, so it’s really a problem with single sport specialization across the board,” added Brenner, who also serves as director of the Sports Medicine Program at Children’s Hospital of The King’s Daughters in Norfolk, Virginia.

The University of Texas study isn’t the only research supporting the dangers of putting all your energy into one sport. According to a 2015 Loyola University Chicago study of 1,200 young athletes, kids who specialized in one sport were between 73 and 90 percent more likely to get hurt compared with those who played multiple sports. The intensity of injuries ranged from kneecap pain to breaks or fractures. Using the same muscles over and over again for repetitive movements, like practicing a tennis serve, can lead to common overuse injuries. The study found muscle strains and tears, stress fractures and growth plate injuries are among the most serious.

Kids who don’t sustain physical injuries from constant play are still at risk of burning out at a young age. This phenomenon is much more common in single-sport athletes, says Michael Goodman, MD, Chairman of the Department of Pediatrics at Cooper Children’s Regional Hospital in Camden.

“What parents need to realize is that there’s a huge difference between kids, adolescents and obviously adulthood,” says Goodman. “The kind of high-intensity pressure we’re putting on our kids to succeed at a high level in only one sport is very inappropriate—it not only leads to a slew of overuse injuries, but it can lead to mental burnout, too.” Exposing kids to a variety of sports and activities teaches them lessons they’ll carry into adulthood. “People tend to forget that youth sports are supposed to be about fun,” says Brenner. “But kids also learn so many other life skills, like how to socialize and be a leader, especially when they play on different teams and in different environments.”

Some of the country’s most successful professional athletes played multiple sports.  Michael Jordan, for example, played both baseball and basketball growing up. “There’s a huge misconception that in order to become a professional or Olympic-caliber athlete you need to specialize in one specific sport before you reach adolescence and compete in that sport every chance you get,” says DiFiori. “But in reality, exposing your children to different sports and group activities at a young age will actually make them better off down the road.”

If your kid’s more involved in one sport than others, it’s important to make sure she’s not putting in too many hours. “For high school athletes there’s no set number, but 16 hours of organized play per week is really the threshold,” says Brenner. “Younger kids on the other hand should play their main sport for as many hours a week as they are old. For example, a 10-year-old should play soccer 10 hours per week.” And they should have at least one day of rest every week.

While experts agree there’s no harm in a healthy dose of competition, they also emphasize the importance of letting kids be kids. Maintaining a balance between school, organized sports, activities and free play is crucial for a child’s well-being. “Doctors want kids to be involved in more deliberate play, which really doesn’t happen much anymore,” says Goodman. “We quantify ‘deliberate play’ as kids getting the chance to go outside and engage with one another without any adult interference or definitive structure. The goal of deliberate play is pure enjoyment rather than competition.”

The bottom line: When it comes to sports, encourage your kids to play the field. Tell your sons and daughters it’s never too late to try something new. Chances are, both you and your kids will be happier for it.