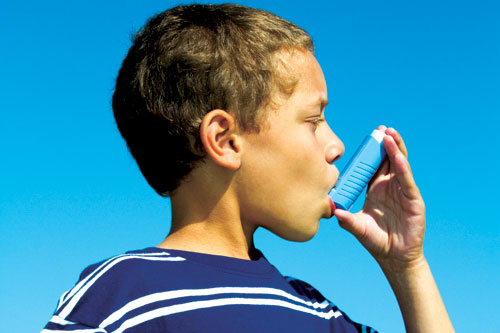 All kids want and need exercise, but what if the sport your daughter loves causes her asthma symptoms to flare up? One in 10 children has asthma, and up to 90 percent of them experience exercise-induced bronchospasm (EIB).

“Asthma is a chronic illness. It’s not caused by exercise, but exercise can bring on symptoms,” says pediatric allergist-immunologist, Arthur Torre, MD, national spokesperson for the American Lung Association and chairman of the Pediatric/Adult Asthma Coalition of New Jersey.

Bronchospasm is a sudden narrowing of the airways and can be triggered by exercise. Symptoms of EIB include shortness of breath, wheezing, cough, chest tightness, and decreased performance. Problems typically begin a few minutes into physical activity and persist for 10 minutes to an hour after the activity stops.

“Coughing or wheezing with exercise is a sure sign a child needs medication,” says Dr. Torre. But if shortness of breath is the only symptom, peak flow measurements can help determine whether EIB is the cause.

Air flow is measured at three intervals: before exercise, six to nine minutes into the activity, and 10 minutes after exercise stops. If peak flow is decreased, it confirms the diagnosis of EIB without resorting to more complicated and expensive testing.

No sports should be off-limits to children with asthma, but EIB is more common in sports where physical activity is prolonged or intense, such as basketball, tennis, soccer, running, cycling etc. (Pollen, environmental pollutants, and viral infections also increase the risk of EIB. )

“Some types of exercise trigger bronchospasm more than others, especially when the air is cold,” says Nina Shapiro, MD, Director of the Pediatric Ears, Nose, and Throat department at the Mattel Children’s Hospital at the University of Los Angeles, and author of Take a Deep Breath: Clear the Air for the Health of Your Child.

Breathing cold, dry air during exercise causes heat and moisture to be lost from the lungs. “When you’re doing exercise, you breathe through your mouth, so air isn’t filtered as it is when you breathe through the nose,” says Dr. Shapiro. Air passing through the nose is filtered and warmed and picks up moisture, increasing humidity before it reaches the lungs. But mouth-breathing delivers cold, dry air straight to the lungs and is more likely to trigger EIB.

One in 10 children has asthma, and up to 90 percent of them experience  exercise-induced bronchospasm (EIB).

Frequent episodes of EIB mean asthma is not well-controlled. When airways are inflamed, symptoms are more likely to occur. “Exercise is just another trigger,” says Dr. Torre. “It’s kind of like a bucket. The more you throw in, the more likely it is to overflow.”

Once your child’s physician or allergist determines she has EIB, the next step is to reduce inflammation in the airways to help control symptoms. When taken regularly, controller medications aimed at treating asthma can decrease the risk of EIB.

Annual asthma education opportunities are available to the staffs at all New Jersey schools, but make sure sports coaches and other adults understand your child’s symptoms and what to do if they occur. Remember, asthma can change, so information should be updated as your child grows. “A child’s asthma can be different at age 5 than it is at age 8,” says Dr. Shapiro. “If your child has the same coach for several years, he may not  realize the situation has changed.”

Other steps to block attacks include:

Spring allergies can trigger runny noses and itchy eyes. If they’re not controlled, they can lead to exercise-induced bronchospasm (EIB). Top spring triggers:

Allergies are Nothing to Sneeze At

For information about asthma and EIB, visit  the websites of the Pediatric/Adult Asthma Coalition of New Jersey or the American Lung Association.

Do allergies and asthma affect your child's abililty to play sports? What have you found to be most helpful for blocking attacks?