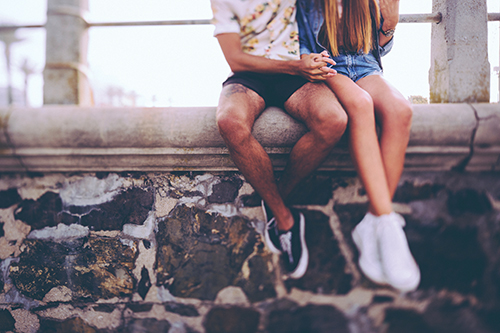 In one year, you’ve watched the girl who needed constant reminders to wash her face and brush her teeth grow into a young woman who hogs the bathroom and is ready for her first boyfriend. The transition to dating can be emotional not only for her, but also for you. And it can be even harder if the guy she has her eye on is older.

A 14-year-old dating a 17-year-old might be perfectly innocent but those who counsel adolescents warn that an age difference as little as three years can be cause for concern. To a young girl, dating an older guy can raise her status among friends, says Steven Kairys, MD, chair of pediatrics at Jersey Shore University Medical Center and an expert on adolescent relationships.

“With teenagers, a three-year difference in age is a powerful differential,” says Kairys, who also serves as medical director for the New Jersey Chapter of the American Academy of Pediatrics. “An older dating partner can often be more persuasive when it comes to things like sex or other risky behaviors. There is a world of difference between their cognitive abilities,” he says. “A 15-year-old girl can look 19, but she’s still 15 inside. At this age, teens are very impressionable and prone to peer pressure.”

Teens who have an older partner are more likely to have sex at an early age compared to those dating someone about the same age, says Mindy Scott, PhD, deputy program area director of Reproductive Health and Family Formation at Child Trends, the nation’s leading nonprofit research organization focused on improving the lives of children, youth and their families. Having sex with an older partner at a young age is also linked to reduced contraceptive use, and higher risk of both teen pregnancy and acquiring a sexually transmitted disease (STD).

One misconception is that most of these relationships involve forced sexual experiences, Scott says. “Our research does suggest that young teens with older partners are twice as likely to report these sexual relationships as ’non-voluntary,’ or that they didn’t choose to have sex of their own free will,” she says. “However, eight out of 10 females reported their sexual relationship with an older male was voluntary.”

Scott is quick to point out that even if both partners believe the contact was voluntary, state statutory rape laws are based on the age of the parties involved. According to NJ law, the age of legal consent is 16 compared to the national age of consent, which is 18. If you’re an adult and you have sex with someone under the age of 16, you can be charged with statutory rape (or aggravated sexual assault) if you’re more than four years older than the victim.

Teen boys and girls feel pressure to have sex for different reasons, but engaging in sexual activity is a means of validation for both. Scott says it’s important to talk with your sons and daughters about dating and what makes for an appropriate romantic relationship—preferably when they’re pre-teens.
Experts agree it’s also important for parents of boys to share this information with their sons before they start dating. Teenagers are known for being impulsive and not always thinking things through. But one bad decision can impact a young man or woman’s future.

Kairys suggests parents avoid direct confrontation. Instead, he recommends asking teens about their observations and opinions. “Conversations about dating should take place before kids start dating,” he says. “Parents can discuss values and basic guidelines and can start by asking their son or daughter what they expect in a healthy relationship.”

When Scott studied communication among parents and adolescents, she observed an interesting pattern: Parents may think they’re communicating clearly about a topic when in fact they aren’t. “They may offer vague advice such as, ’Take care of yourself,’ instead of addressing specific issues. Specific conversations can be uncomfortable, but they help convey a clearer message.”

Scott suggests asking your child if any of his or her friends are dating, and if they are, she recommends asking about those relationships.  “Ask your daughter what qualities she is looking for in a dating partner,” she says. “Ask her what makes a relationship a good one. What makes it bad? How can you tell if someone is showing you the respect you deserve?”

The darker side of dating, regardless of age, is being in an abusive relationship. The Jersey Battered Women’s Service (JBWS) offers a checklist of some dating red flags that both teens and parents should know about:
•  Your partner is possessive.
•  Your partner threatens to kill you or himself.
•  You can never be yourself around your partner without negative consequences.
•  You spend all your time together.
•  He or she hits you or threatens to.
•  If you break up, your partner won’t let go.
•  Your partner forces you to have sex against your will.
•  Much of your time together is consumed by apologies, promises, guilt and anger.

Kairys suggests teens create a code word they can use to text their parents if they’re in an uncomfortable or scary situation, like being at a party where people are drinking excessively, doing drugs or getting out of control.  “One of the most important things parents can convey to their kids is that they’re always going to be there for them,” he says.

No matter who your teen chooses to date, remember that romantic relationships are a healthy part of adolescence, Scott says. “Teens are far less likely to confide in you in the future if you forbid them to date,” she says. Above all, keep the conversation going with your son and daughter, says Scott. “Share your own personal experiences and explain why you have high expectations about any relationships they get involved in.”