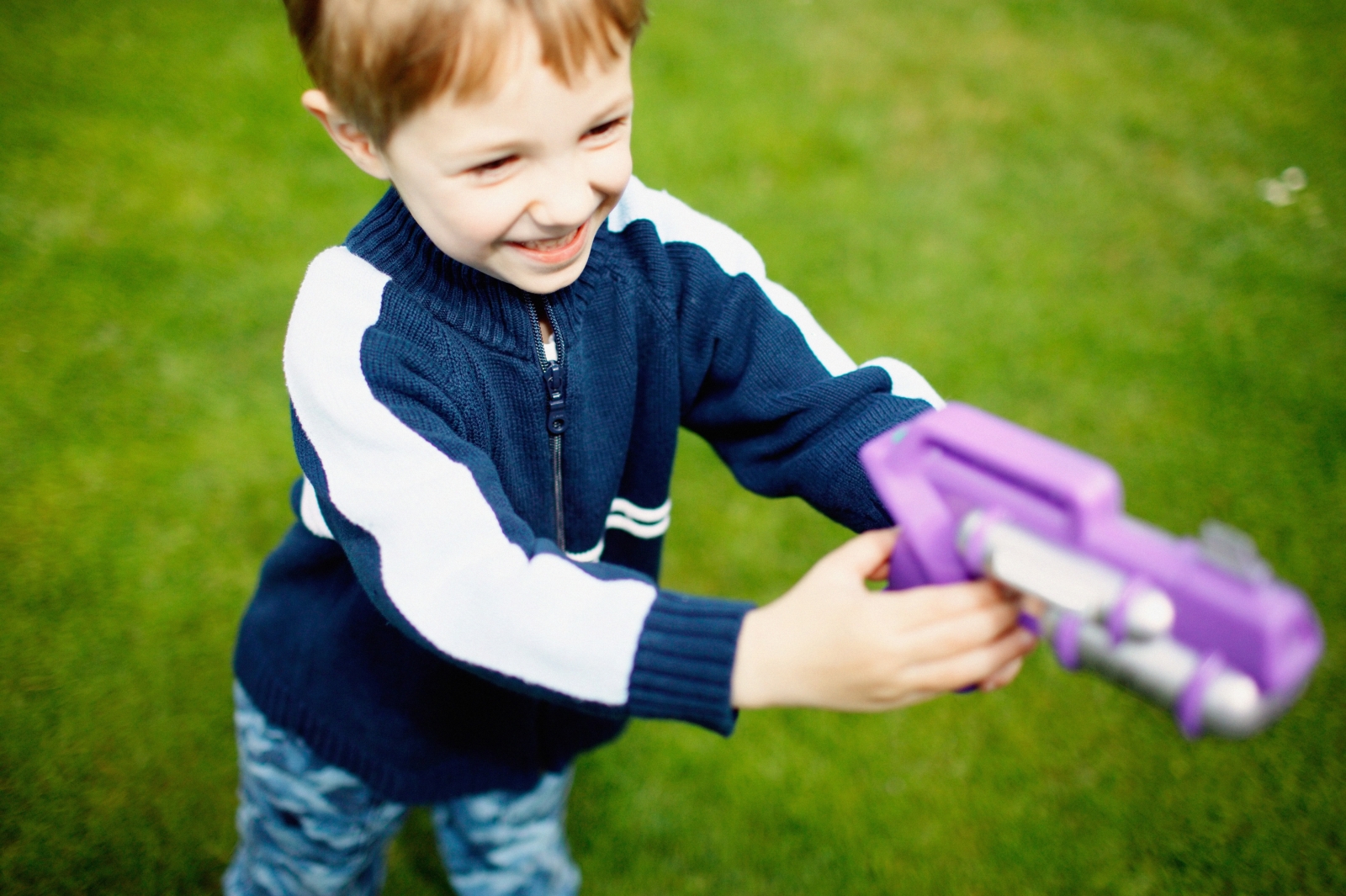 Emily Waggoner, a former social worker who runs an in-home daycare, wasn’t crazy about the idea of guns in her home—real or fake. But one day last summer, her husband Dustin and 9-year-old stepson Will came home with a cadre of toy Nerf artillery. “Shot gun, sniper, semi-automatic—everything,” she says.

Waggoner balked at the pile of foam ammunition. Father and son were happily bonding over their new toys, fashioning armor and shields out of cardboard and duct tape, but sharing a home with all those toy guns still made her squirm. She was in a bind—one shared by countless modern parents trying to navigate the world of toys, boys, and pretend guns.

When it comes to pretend guns, parents often find themselves at odds with their kids’ natural tendencies and without much guidance from science. One study by Malcolm Watson at Brandeis University found that toy guns increase aggressive behaviors, but scores of parents, experts, and researchers heartily disagree. And a growing school of thought around child-led play suggests that maybe toy guns have a place in early childhood, after all.

As shootings dominate the news month  after month, pretend gun play has never been more maligned, says Katie Morse, LCSW, a psychotherapist in private practice. Many school districts have a zero-tolerance policy. In September, an 8-year-old Florida boy was suspended from school for pointing his fingers like a handgun. And then there’s the ick-factor: Gun play just simply makes us uncomfortable. “It’s easy to see violence and aggression in society and in the media, and then your sweet, innocent boy is saying ‘bang bang’ and ‘I killed you,’ and you get overwhelmed with fear about  whether he could grow up to be violent,” says Morse. “As a parent, those are normal, natural responses.”

Even so, our collective discomfort over fake artillery doesn’t stop kids from turning everything they find into a weapon. After Gloria Lunsford realized that Caleb, 4, and Jacob, 3, didn’t need actual toy guns to lob pretend gunfire at each other, she surrendered, as it were. Now, Lunsford allows pretend guns, “but they cannot point them at people,” she says.

As parents like Waggoner and Lunsford have learned, banning pretend gun play usually doesn’t work. “If your child wants to play guns and you’ve enforced such a ban and think it’s working, you’re probably just not turning around fast enough,” says child-led play advocate Jeff A. Johnson, owner of Explorations Early Learning and author of numerous books, including Let Them Play: An Early Learning (Un)Curriculum. Kids with a drive for pretend gun play will find a way to make it happen, says Jonson. “I’ve seen children chew toast into handguns.”

Another reason parents cringe at pretend gun play: It’s a stubbornly stereotypical “boy” behavior that persists, even in families that dial down traditional gender roles. Parents who are careful not to impose strict gender paradigms are often dismayed to find that their little boy finds them anyway, racing around the house shooting bad guys with a hairbrush.

Once again, it’s biology 1, parents 0, say neuroscientists Sandra Aamodt and Sam Wang, authors of Welcome to Your Child’s Brain. Gender-influenced toy preferences appear across cultures by one year of age; by three, children overwhelmingly choose toys associated with their own gender. Even primates distinguish stereotypical male toys from female ones, according to Aamodt and Wang: Male monkeys prefer to play with trucks, and girl monkeys with dolls.

So kids will find a way to conjure up a toy pistol if they want one, and boys will be boys. And parents are just supposed to be okay with this?

It looks that way. While toy gun play can be alarming to parents, it’s usually harmless, says Morse. In fact, many child experts agree that forbidding this type of play only gives pretend guns more power.

“Banning gun play may result in boys hiding it and feeling shameful for their desire to play in this innate way,” she says.

And stripping childhood of gun play doesn’t benefit boys, she notes. Gun play has developmental value, helping boys make sense of their world as they grapple with input about masculinity and power from numerous sources—male role models, TV and movies, friends, and schoolmates.

Even though toy gun play appears violent at first glance, parents should peel back the layers of what they’re seeing, says Johnson. “Toy gun play isn’t about violence as much as it is about symbols. Toy weapons are symbols of power, leadership, authority, strength, and control.”

Pretend arms give children the chance to unravel these complicated concepts in the safe realm of play. “A child crawling on his belly across the yard holding a stick-gun may be processing a pretend death and heroically pursuing a powerful enemy he will confront and defeat,” he says. “As casual observers, this kind of play looks violent and can make us adults feel icky inside, but the learning is rich and valuable.”

So a little “good guy-bad guy” role play is probably harmless, and may even have benefits—but experts say parents can and should set limits around this type of play.

Rule number one: Kids shouldn’t hurt each other during pretend gun battles. Rules such as not pointing or shooting at others’ faces and not shooting family members or pets are important in laying the framework for safe imaginary play, says Morse. Parents don’t have to agree to purchase or keep toy guns in the home if they’re uncomfortable about it; kids can get creative with household objects like paper-towel rolls or empty soap dispensers.

Keep an eye out for red flags during pretend gun play, like hurting people or animals “accidentally,” lack of remorse or empathy, or other aggressive behaviors. These are cause for concern, and may warrant a chat with your child’s pediatrician.

Limiting exposure to violent TV programs and video games may be a better way to protect boys from aggressive influences than banning gun play. Research consistently links violence-glorifying video games with reduced empathy and increased aggression. A recent study from The Ohio State University showed a clear relationship between violent video games and numbness to the suffering of others. Unlike pretend gun play, violent video media has little to no redeeming learning value, says Morse.

As for Emily Waggoner, she’s slowly warming up to toy weapons. She’s learned to value the bonding experience her husband and stepson share as they build forts and shoot down imaginary invaders. “Toy guns still make me uncomfortable, but that’s my own issue. I’m coming around.”

Malia Jacobson is an award-winning parenting and health journalist, and mom of three.