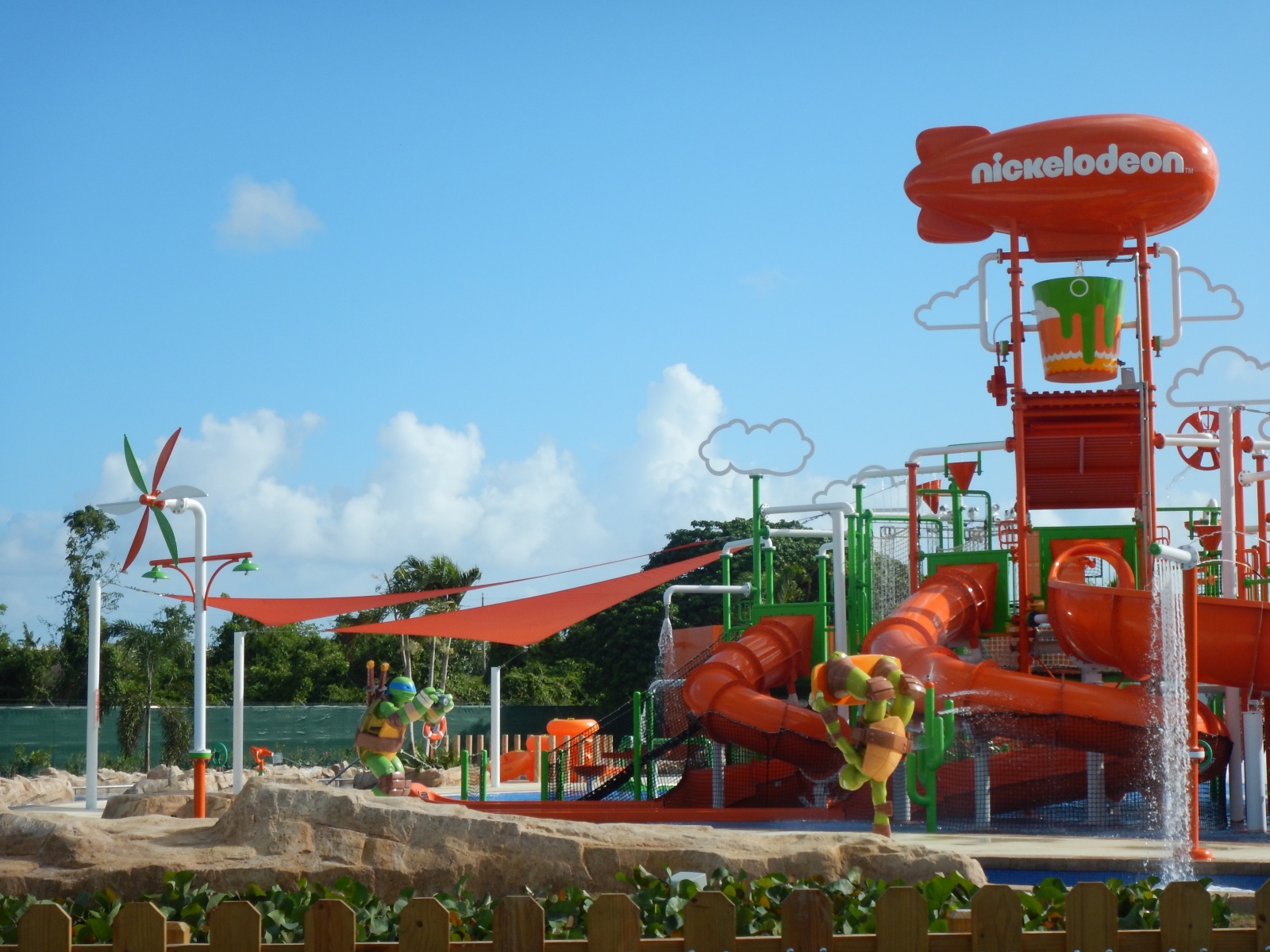 We love trekking to Orlando for Disney and Universal, but if you’re looking to combine your next tropical vacation with some family play-time, we've found the place for you. The newly-opened Nickelodeon Resort in Punta Cana is an island paradise that also happens to be infused with a bunch of adorable Nick flair.

New Jersey Family got an invite to check out the  all-inclusive resort, which opened in May, but had its big grand opening in August. During our stay, we were actually able to enjoy some grown up time (thanks to the Kids Club) and family togetherness. The family that gets green slimed together, stays together, right? 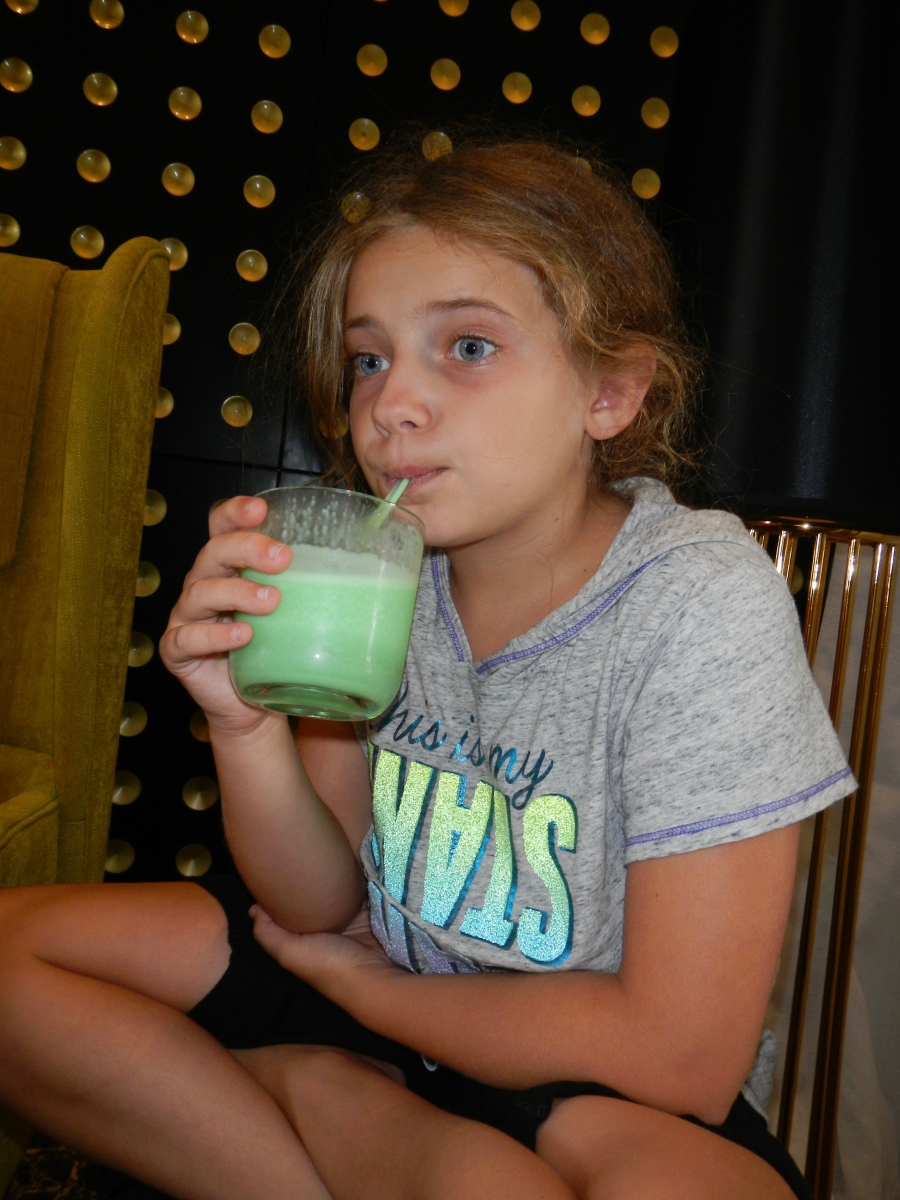 Once you check in, you’ll  be welcomed by cocktails–champagne for the adults and green slime smoothies for the kids–and an awesome big bronze statue of SpongeBob. The Nick touches are a lot more subtle in the lobby and hotel rooms: think frosted glass character windows, and shadows of Michelangelo doing some high-kicking moves. It's a fun game to look for the "hidden" characters around the resort. 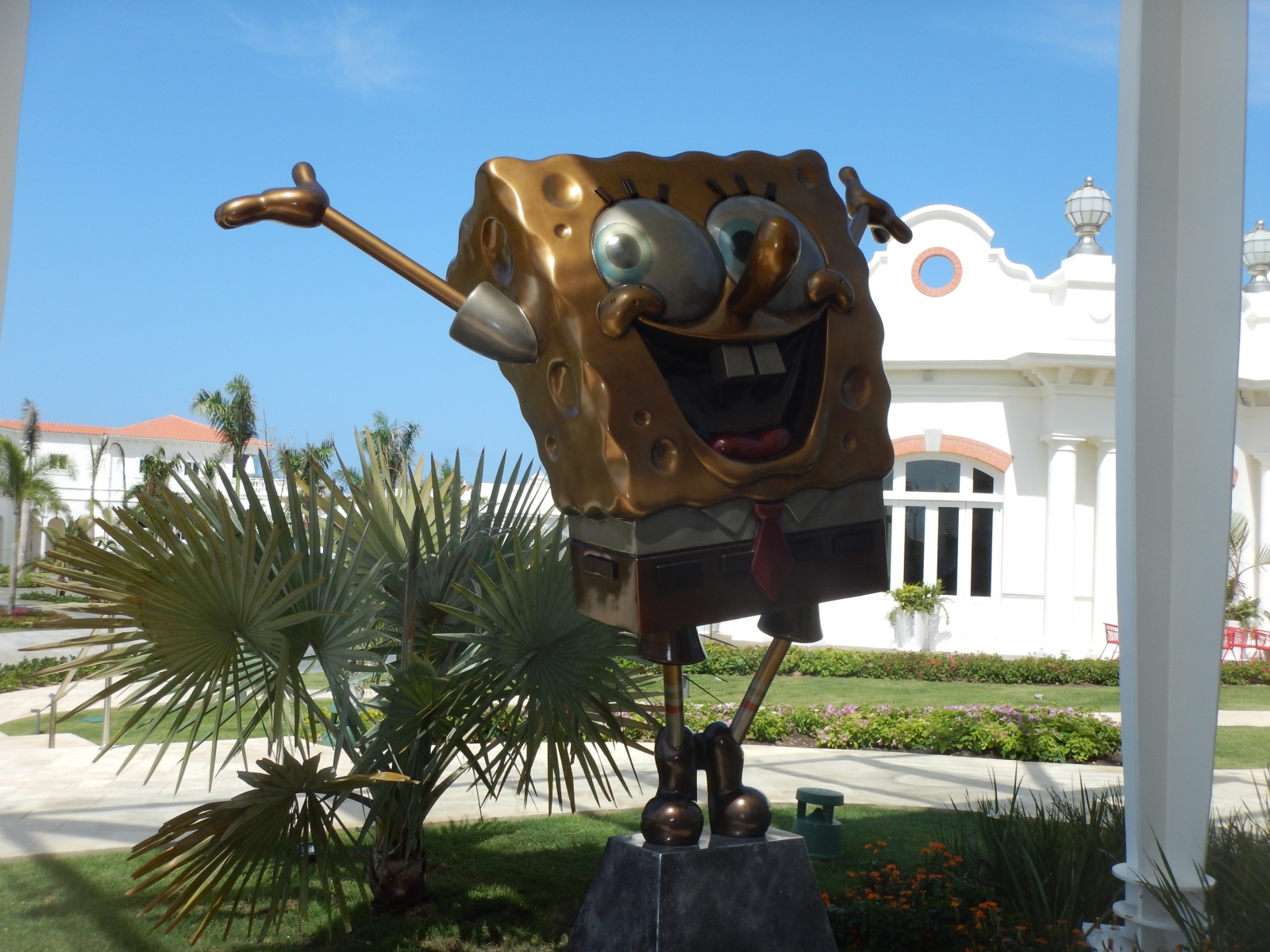 If you want kiddie character fun, head to Nickelodeon Place, where there are meet and greets daily (be sure to pick up a schedule) and music and fun, all with the big Nickelodeon bright orange blimp and vibrant colors on display. 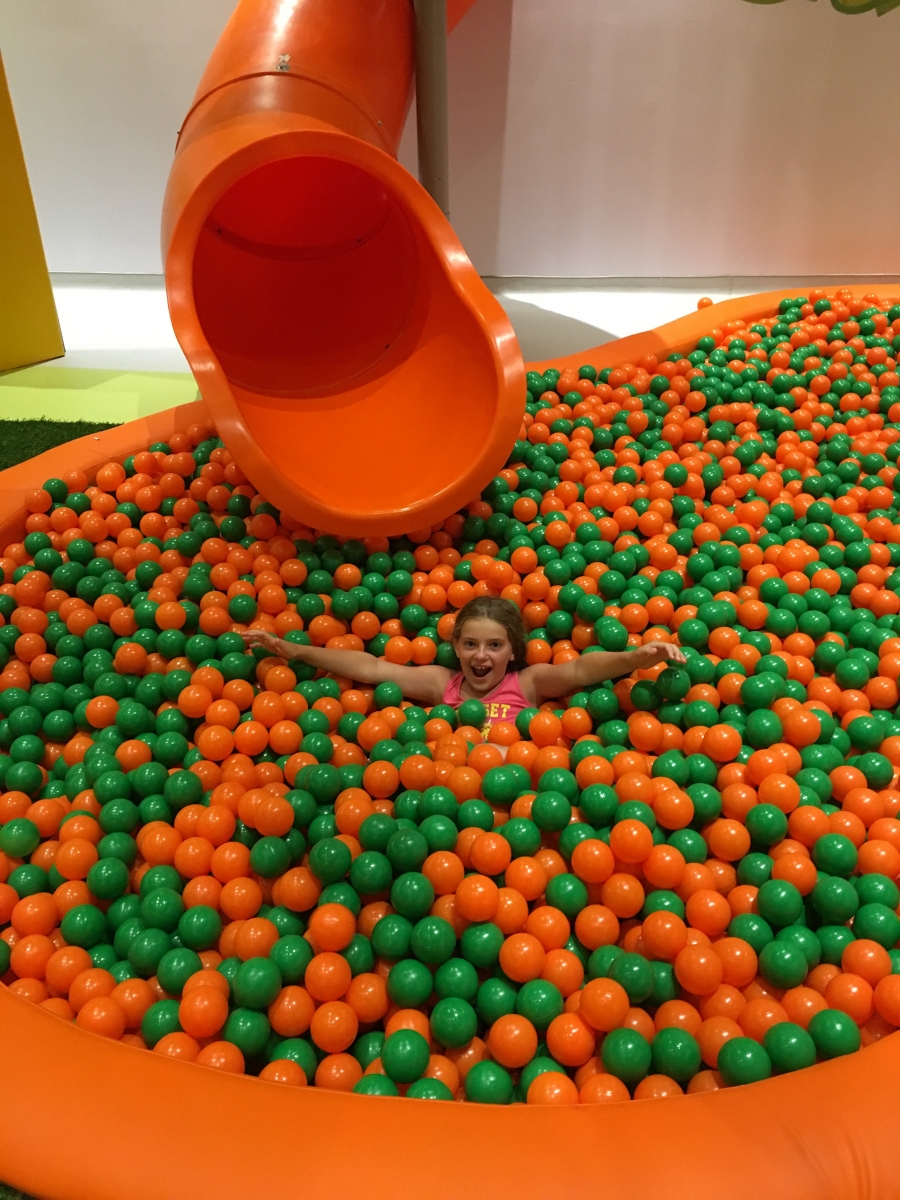 Kids over 4 can check out the  awesome Just Kiddin' area where enthusiastic Nick specialists will teach them games, do crafts and let them explore a giant treehouse, big slide and enormous ball pit. We were concerned our 10-year-old would deem this too babyish, but she took one look at the ball pit and dove right in.

Teens have their own relaxing spot too–a big lounge packed with video games. And there are tennis courts and an archery range where everyone can get a little sporty. And while the kids are  occupied, you can hit the spa or gym, take a class or lounge by the pool. 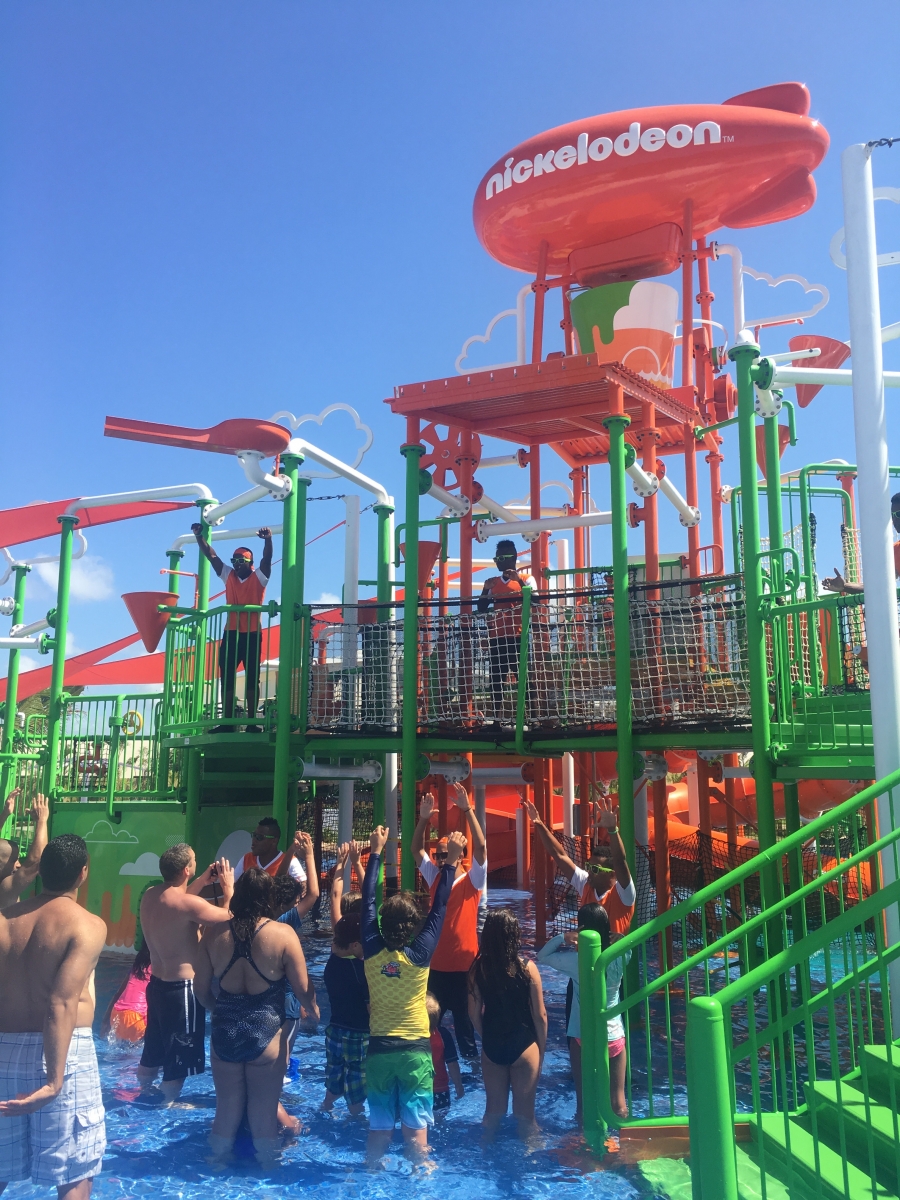 When you want to hang as a group, cool off at AquaNick, where there are water slides, a big lazy river, and a splashpad with water cannons and dumping buckets. At certain times of the day you can get green slimed either under the dumping bucket during mass slime time, or in your own group. You can play, or kick back under an umbrella with a drink, while the kids load up on free ice cream from the snack bar. 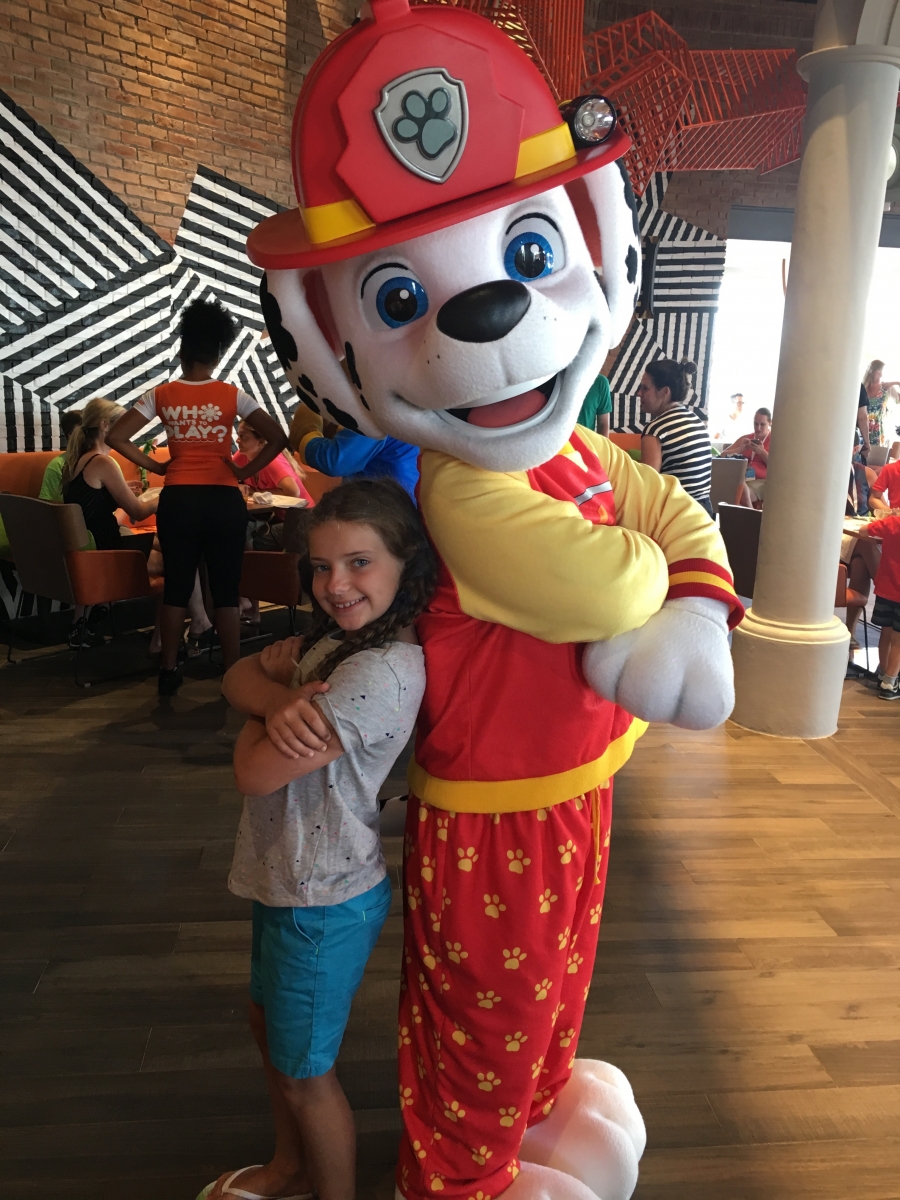 Back on the hotel side of the resort (golf carts will take you wherever you want to go), there are plenty of restaurants for your picky eaters. There are buffet-style restaurants, a burger joint (our family fave), and some upscale dining options. Aside from a Green Slime smoothie on the menu, at most of the spots, you won't see a trace of Nickelodeon, which is fantastic if you’re don’t want to be barraged with too much Nick. Ninja Turtles will not be waiting on you at the Italian restaurant. We promise. That said, there's an included character breakfast option, where the kids can mingle with Patrick Starfish, Dora and the Paw Patrol gang. 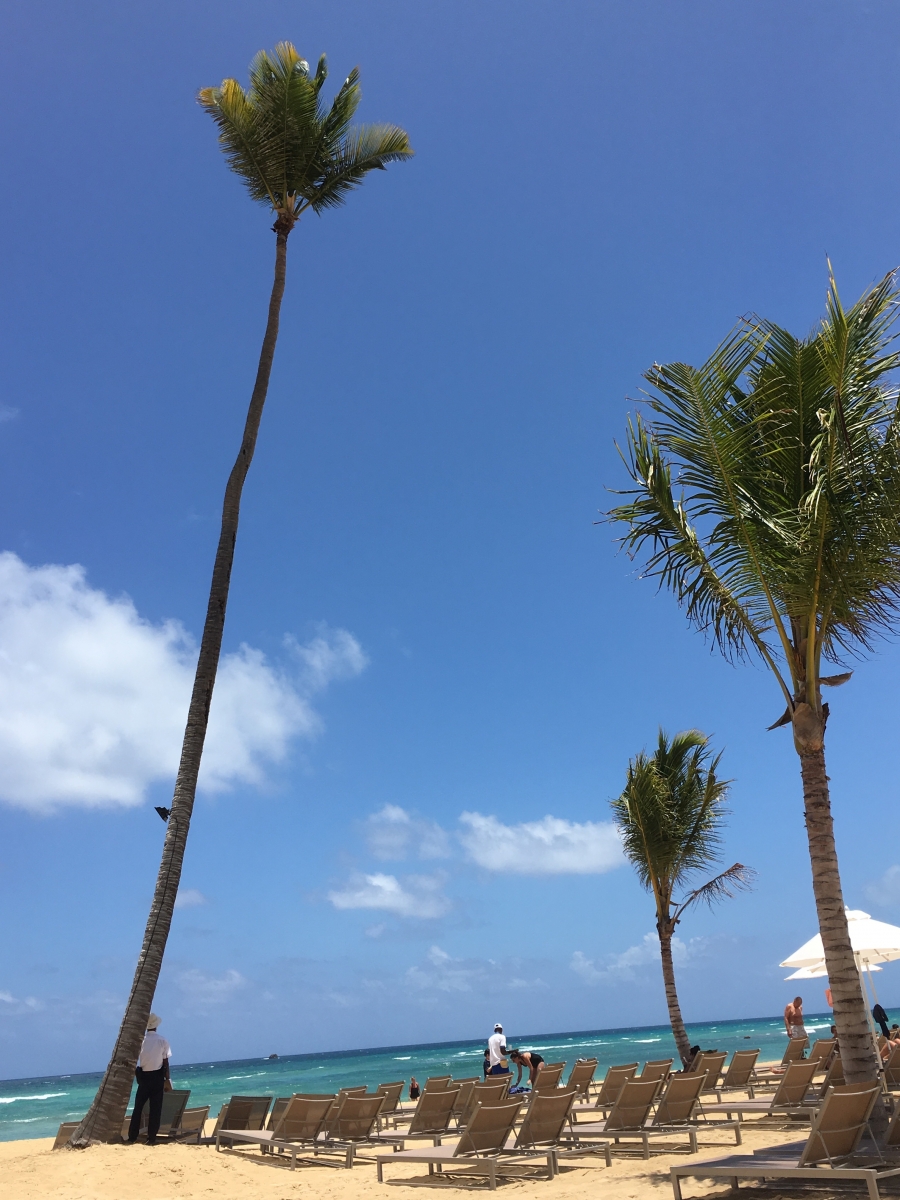 On the resort side, there's also a full-beach, a spa (treatments are extra), cabanas and boogie boards available, and a massive infinity pool with a swim up bar. 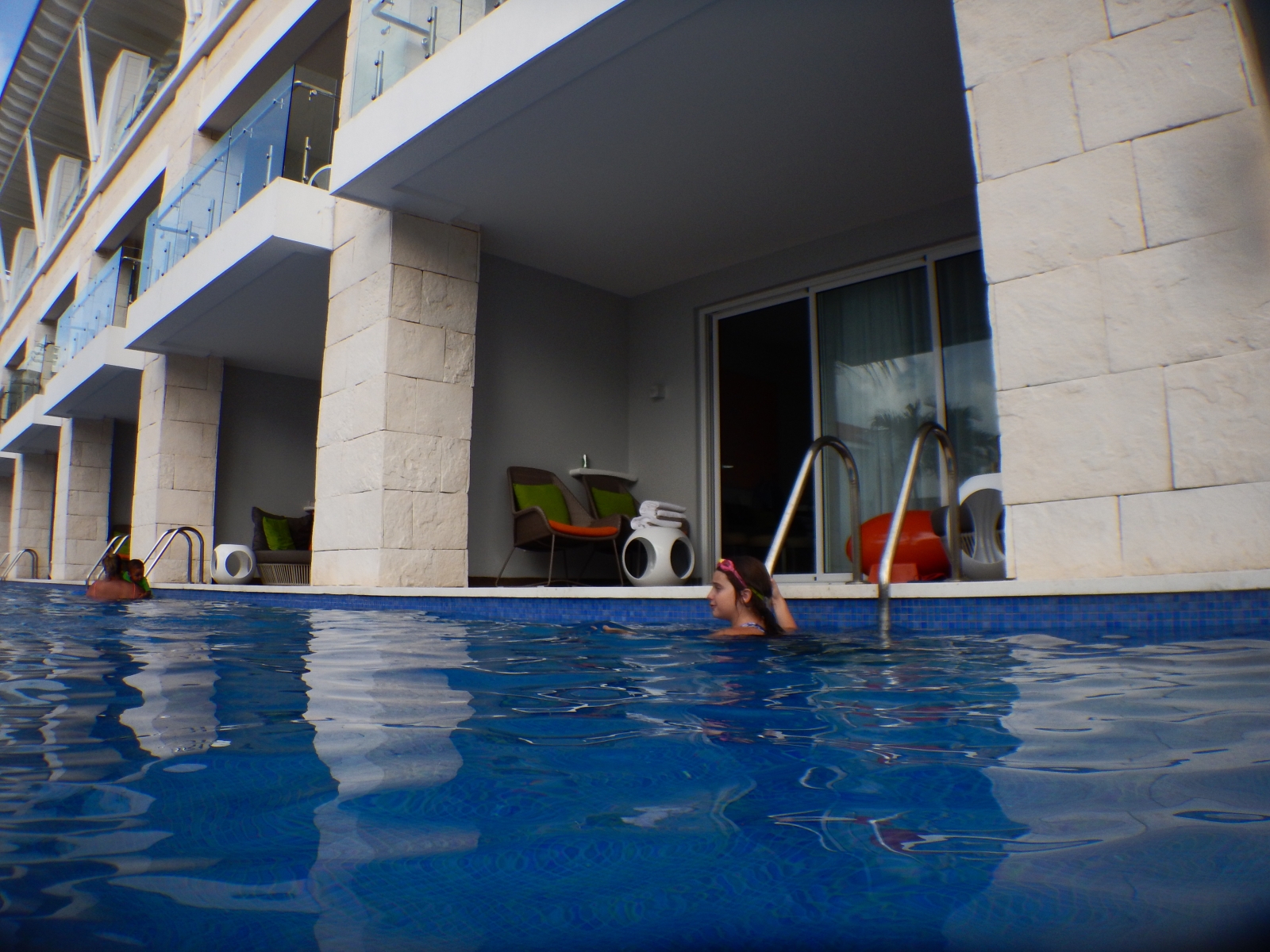 But the best part are the rooms. Every room is a suite. The ground floor rooms allow you to step right off your patio and into one of the pools that run the length of the building. Regular pad suites on the upper floors can access these long pools and the lounge areas, as well, but you’ll have to head down the stairs. And there are bigger options, like the Swank Pad Suite, which is a big corner suite with lots of room to play.

The rooms have big beds and pull-out couches for the kids… if you can get them out of the pool (trust us, it's a challenge), huge tubs, rain showers (which the kids will love), and an unlimited mini-bar that they'll stock with your faves. And if you love your room (and the private pool)  so much you don't want to go anywhere, there's 24-hour room service that's also included. 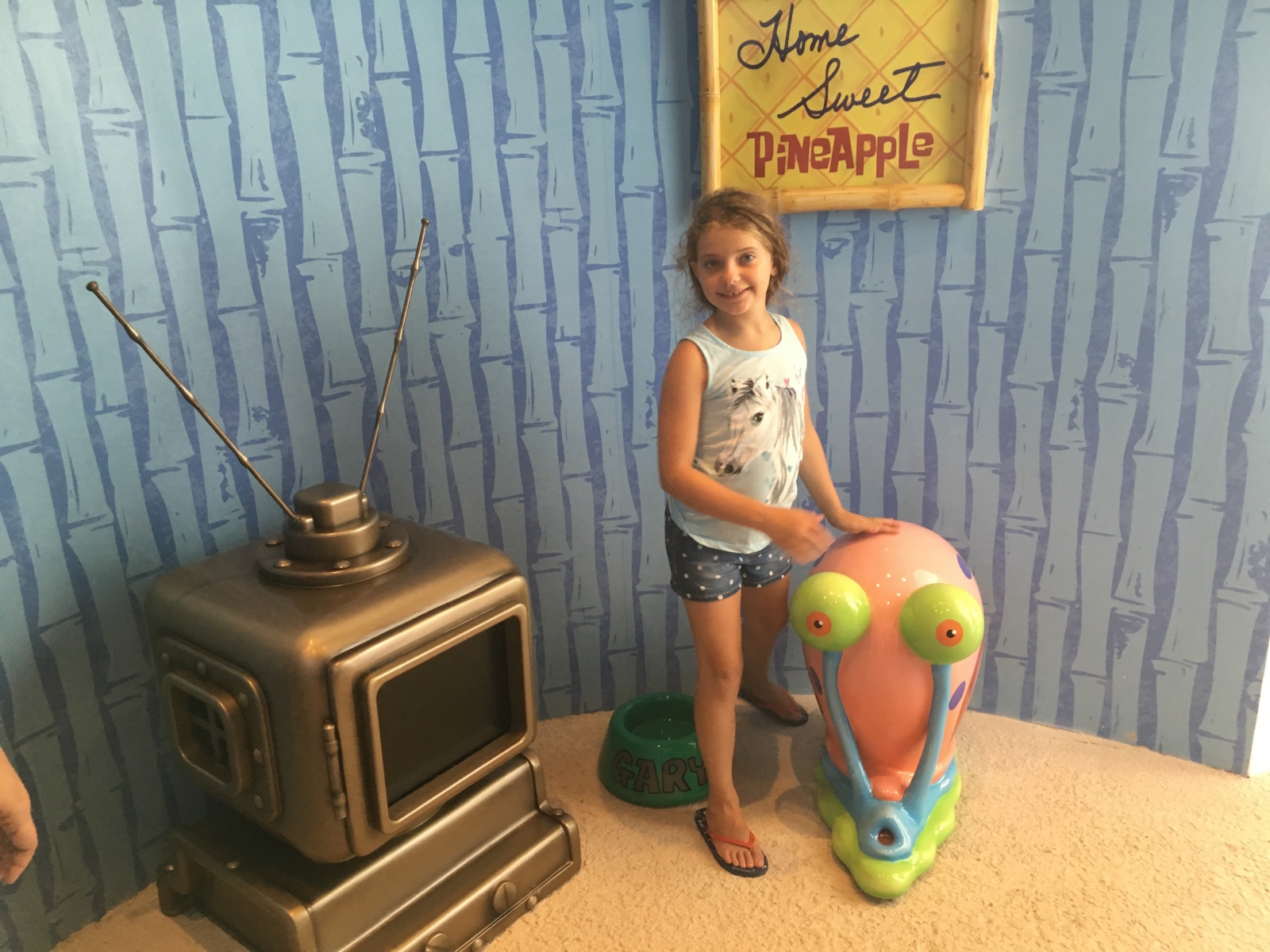 And if you've won the lotto, or have some expendable income burning in your pocket, you can really splurge and stay at the Pineapple Suite. This one-of-a-kind room has a private infinity pool, multiple bedrooms, and outdoor bathroom and SpongeBob decor. It's completely awesome, and comes with a private butler. 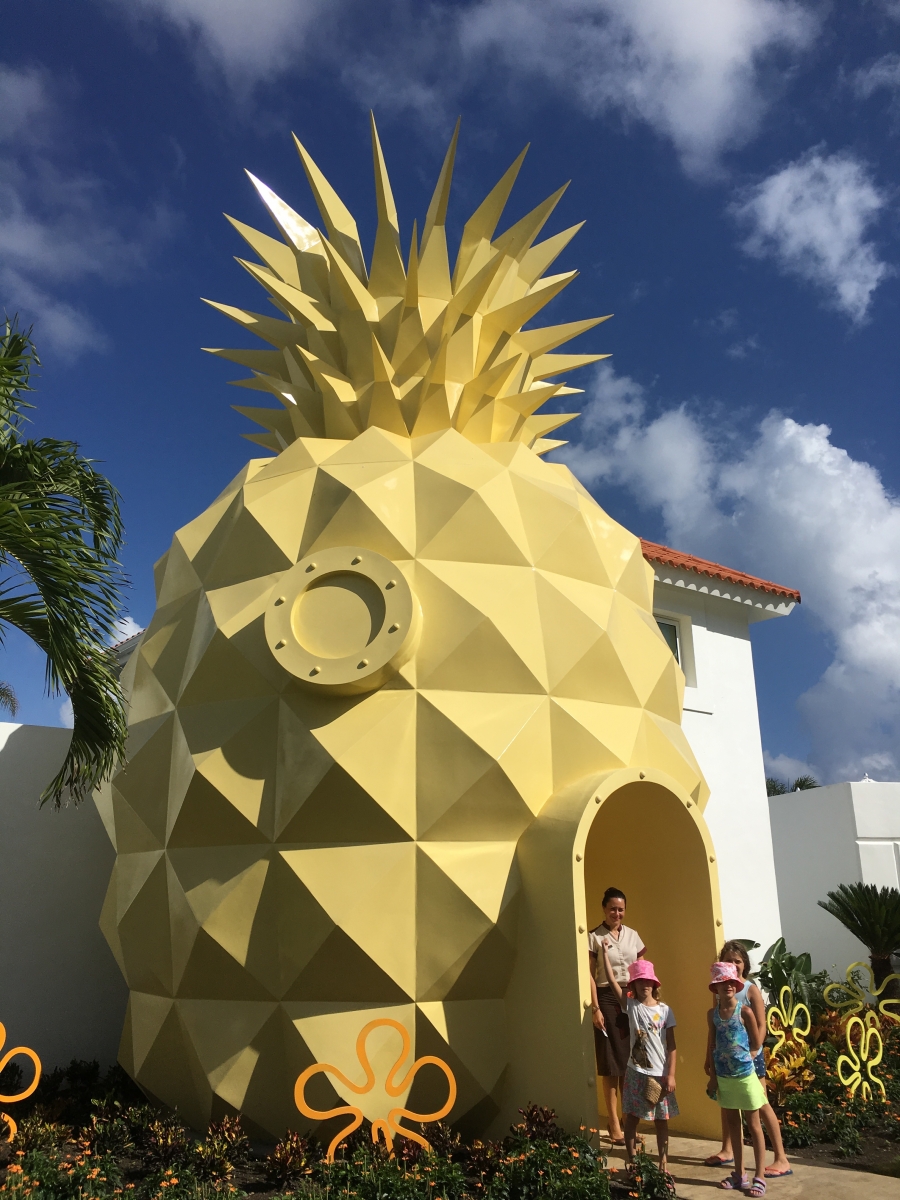 The only real downside comes if you are hoping to live it up once the kids go to bed. There aren't a lot of late night options. Most of the restaurants are closed well before midnight. But the kids club has early hours, so if you want a romantic date, you might either opt for a mid-afternoon lunch while they are playing, or splurge on hiring a babysitter (the concierge desks that pepper the resort are more than happy to arrange that for you). 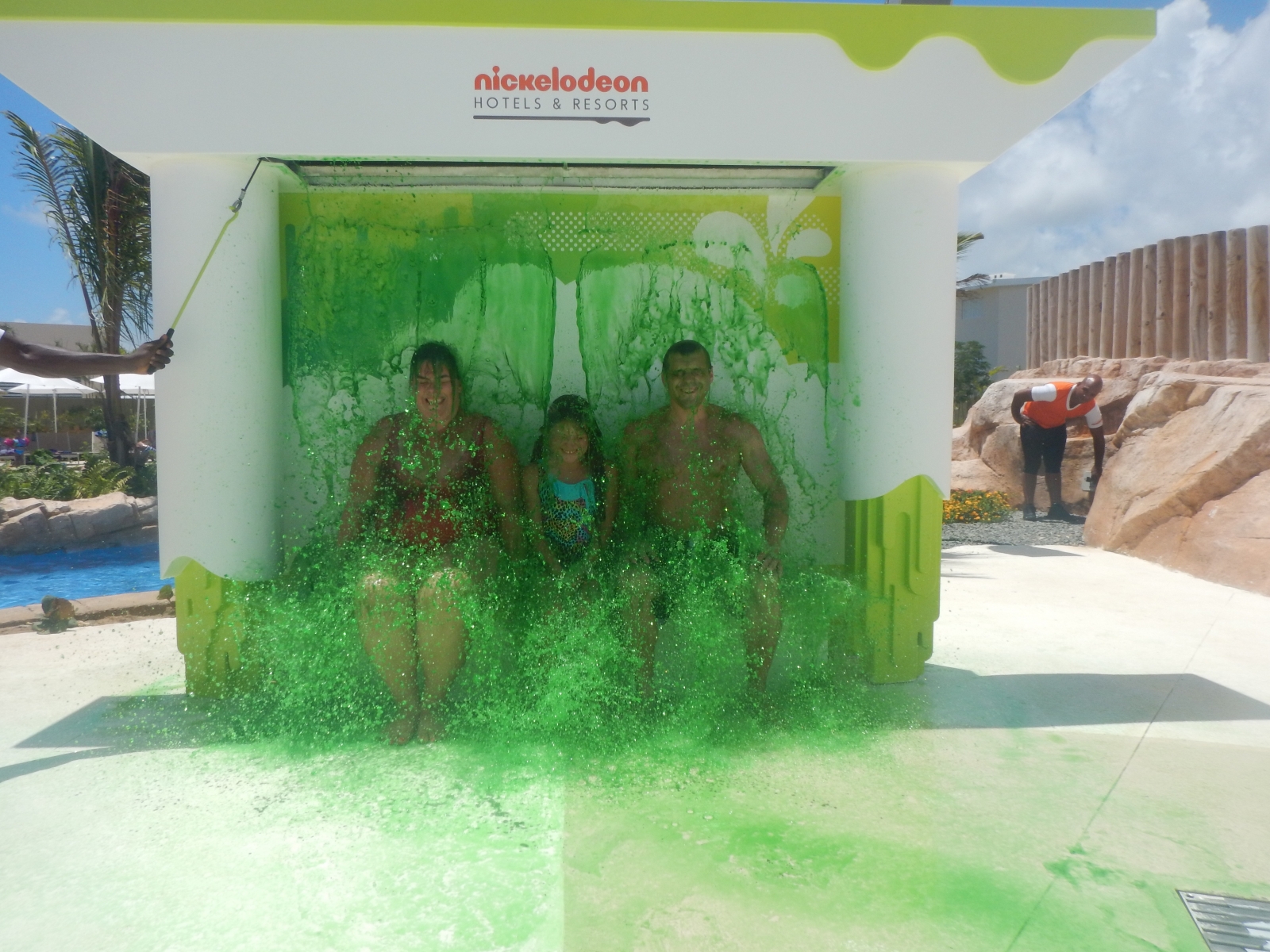 The regular suites start at $345/per adult per night, up to two kids (under 13) are free with two adults. The price includes unlimited meals and alcohol at the all-inclusive resort (though some spots ask for a reservation, they are still included). Kids club is unlimited, though the hours vary daily, so plan accordingly before making reservations. Check nickresortpuntacana.com/specials and  you might be able to get a better deal… well, unless you want to stay in the pineapple.

More Like This:
Nickelodeon Universe is Coming to the Meadowlands
An Insider's Guide to Walt Disney World
Great Weekend Road Trips You Should Take