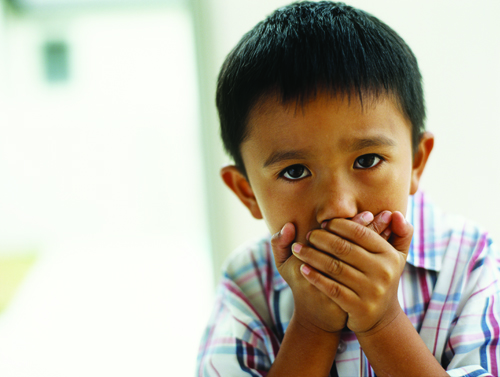 For most parents, hearing their child utter her first word is among the most exciting milestones. But when a three-year-old still isn’t forming full sentences, or a toddler’s speech is impossible to understand by anyone except Mommy and Daddy, there’s a chance they may be dealing with either a language delay or disorder.

According to Natalie Glass-Neubauer, director of clinical education and assistant professor in the department of speech-language pathology at Seton Hall University and board member for the New Jersey Speech-Language-Hearing Association (NJSHA), a child may have a communication disorder when she’s developing skills in an illogical order, while it’s considered a communication delay when they’re reaching the necessary speech and language milestones but at a slower rate than their peers.

Red flags for an expressive language disorder include not being able to form sentences, struggling to find the right word while talking, or using the same words or phrases over and over again.

Other speech and language difficulties revolve around articulation, when a child has difficulty producing certain speech sounds, or apraxia, a problem with the coordination of speech muscles that makes it difficult for a child to say what he or she wants to say correctly and consistently. Stuttering, while not as common, affects some 20 percent of children at some stage in their lives—approximately 1 percent end up with a long-term problem. New Jersey is also known to have a high autism rate, which dramatically affects a child’s communication skills.

If you suspect your child may be struggling with a speech and language delay or disorder, experts say the first thing to do is rule out underlying causes, including difficulty hearing, neurological causes like trauma, oral or dental issues, or a developmental disability like autism. Many studies have found a link between communication disorders and genetics, so a family history of speech and language difficulties should always be considered.

“I always recommend parents err on the side of caution; if they’re concerned their child might have a speech delay or disorder, they should go with their gut instinct,” advises Tatyana Elleseff, speech-language pathologist at the University of Medicine and Dentistry of New Jersey. While the first step may be a conversation with your child’s pediatrician, parents can also reach out to their school district or speech-language pathologists in private practice or at local hospitals or rehabilitation centers. A variety of resources can be accessed through the New Jersey Early Intervention System and the NJSHA.

“Parents should seek help as soon as they have any concerns about their child’s speech or language…an early diagnosis can lead to a better prognosis,” Glass-Neubauer says. Treatments vary widely, and include speech and language therapy and possibly psychological therapy. The length of treatment time required will depend on the severity of the issue. “Intervention will take both time and commitment on the part of the caregiver and the child,” she concludes.

Jennifer L. Nelson is a NJ-based freelance writer specializing in health and parenting.