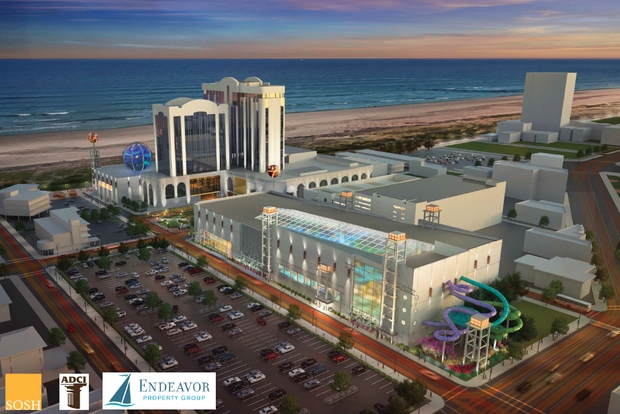 3/13/17 Update: While progress at the Meadowlands has come to a standstill, plans for a giant water park in Atlantic City are picking up pace.::

R&R Development Group, LLC recently announced plans to  purchase the Atlantic Club, a vacant casino, and turn it into  a humongous water park, entertainment center and hotel. Sounds familiar? Another company tried to do this a year ago, but the plans fell through.

The 100,000-square-foot water park will give kids something to do in the city and offers a family-friendly alternative to adult gambling fare.

Though there’s no set date for this South Jersey megaplex to open, things seem to be headed in the right direction.

What was once a family entertainment center at a former boardwalk casino in Atlantic City is definitely on its way to a serious facelift.

This past week a state agency in charge of the city’s zoning policies approved the installment of an 81,000-square-foot indoor water park in an effort to facilitate both tourism and economic improvements in Atlantic City. There will also be another 27,000-square-foot water park on the property. And a 58,000-square-foot family entertainment center is also projected to be built and the existing hotel and restaurants will be renovated.

Although it is unclear how the group intends to play for the enormous project, it is expected to cost between $150 and $165 million dollars.

Hot on the heels of that big announcement, American Dream Meadowlands (formerly known as Xanadu) has revealed plans that would make its AC rival look miniscule. The Meadowlands spot is expected to open in the summer of 2017, and will be a whopping 225,000-square-foot indoor water park.

More Like This:
Funplex’s Splashplex is Now Open
Take the Plunge at Indoor Waterparks and Pools
Boardwalks in New Jersey