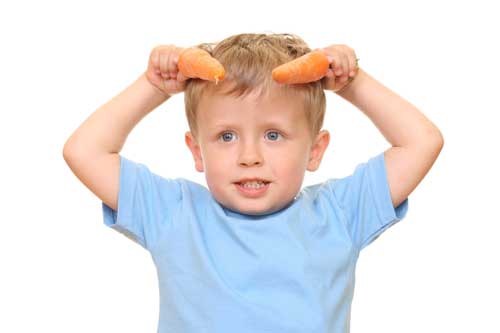 Ever feel like life with your preschooler is one long argument? Sometimes it can seem like asking him to do the most basic things—like, put pants on before going outside—turns into World War III. While part of that is, well, life with a preschooler, here are two extremely simple and low-effort ways to make everyday life a little more pleasant:

When my son Frankie was 3, we had this conversation about six times a day:

Me: Frankie, it’s time to go to the bathroom. (Pause for argument)

Me: Frankie, you always have to go before we leave the house. (Pause for argument)

Frankie: No! Leave me alone!

You can imagine the rest.

Separately, we had this type of half-conversation about 20 times a day:

Frankie: Mommy, did you know that Jedis have different color lightsabers?

(No, a 3-year-old should not know that much about Star Wars, but that’s a subject for a different post.)

Me (half-listening while cleaning the kitchen): Really!

One day, in one of those rare aha! moments, I decided to merge the two. When it was about time for him to go to the bathroom, instead of my usual announcement, I said, “So, Frankie. What were you saying about every Jedi having a different color lightsaber?”

He was only too happy to explain. But this time—get this—I paid attention! Instead of just saying, “Uh-huh” and “Oh, really?” at the right times, I forced myself to process the information he was telling me and asked relevant questions, like, “I wonder why Mace Windu chose a purple one?” All the while, I took his hand, led him into the bathroom, and stood him by the toilet; he did the rest without a single argument—and with me not saying a single word about “going to the bathroom.”

This works in situations outside of the bathroom, too. Like, with eating vegetables. Here’s how lunchtime used to go:

Me: Frankie, you need to eat some carrots with your lunch. (Pause for argument)

Frankie (obliging): No! I don’t want carrots! I hate carrots!

After my epiphany about announcements, here’s what I did: I wordlessly put a bag of baby carrots out on the table while I made lunch (and when I knew he was at his hungriest), eating from the bag myself. Frankie walked in, covered his eyes in horror, and said, “Oh, no, not baby carrots! I hate carrots!”

“They’re for me,” I said between chews.

He sat there not eating any while I took my time making our lunches and talked about something else. Eventually, he stuck a hand in and helped himself to a stick or two. At that point, it was tempting to say, “Aha! You do like carrots!” But I restrained myself.

2. Let your child be in charge before stressful situations.

The no-announcements thing is good for everyday routines, but when something out of the ordinary and potentially stressful is about to happen, it’s best to prepare him—and let him be in charge for a little bit before embarking.

For example, when I needed to go to Kohl’s, Sports Authority, and the post office all in one afternoon during the holiday season last year, I knew Frankie wasn’t going to like it. He was looking at hours of being told how to behave, not to touch anything, walk faster, and not even complain about it when all he wanted to do was stay home and play with his action figures. So before we left, I told him what was in store but made time to play Batman with him before we left. He told me to be the Joker. I thought I was doing a pretty good job of cackling and coming up with ridiculous antics when Frankie interrupted me and said, “No, no, the Joker doesn’t laugh like that. Do it like this.” This happened about 20 more times—me saying a line, him telling me I was doing it wrong. I was about to tell him that if he wanted it done so specifically, he should play by himself, but, remembering the tough day ahead of him, I let him boss me around for 30 minutes or so, figuring it was more than a fair tradeoff.

I’d like to say that then when it was time to embark on the errands, he was gung ho to look at women’s sweaters and mail packages of presents that weren’t for him, but of course he wasn’t. However, he was in a much better mood than usual when we left—bringing his Batman and Joker along with him.

What tricks do you have to curtail arguments with your preschooler?