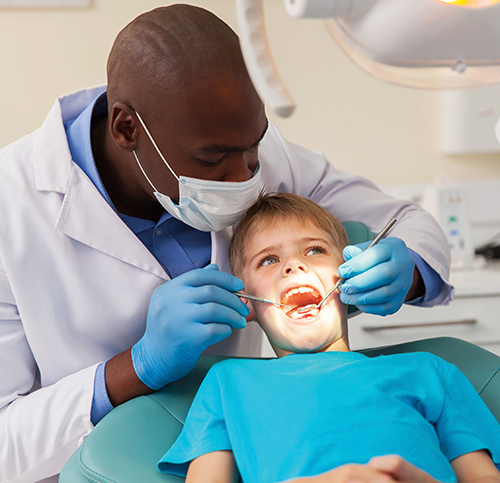 Look at pictures from the ’70s and ’80s, and you’ll see smiles covered up by lots of heavy, metal braces. It’s a sight far less common in high schools these days, since kids tend to get braces at an earlier age—which means by the time prom season rolls around, that hardware will be long gone.

The American Association of Orthodontics (AAO) now recommends that all children have their first orthodontist appointment when they’re seven years old.

Treatment in kids that young is known as interceptive orthodontics: The teeth are still developing, the jaw is still growing and
certain issues like crowding are sometimes easier to address.

“[The early appointment] isn’t necessarily to start treatment, but to evaluate growth and development,” explains AAO President Dr. Morris Poole. “So if there’s a problem that’s starting to manifest itself, we can handle it.”

Dr. Thomas J. Cangialosi, past president of the American Board of Orthodontics and chair of the Department of Orthodontics at the University of Medicine and Dentistry of New Jersey, says earlier checkups sync up with important dental milestones, too.  “Permanent teeth generally begin to come in at age six or seven, so it’s then that orthodontic problems become apparent.”

Getting a head start means orthodontists can help the “big” teeth erupt—or emerge through the gums—into more ideal positions.

It’s common, for example, for a patient’s dental arch (the U-shaped form the teeth take in the mouth) to be too small to fit all the adult teeth. A few decades ago, the solution to “crowding” was almost always to extract some of the permanent teeth (once they came in) to make space. Then, braces were used to position the remaining teeth properly.

Today, with early intervention on a child’s still-growing jaw, orthodontists can use a device called a palatal expander to make the patient’s upper dental arch bigger. Once it’s the proper size, there’s a better chance adult teeth will come in straighter and better-positioned.

When Will He Get Braces?

Early treatment may also be useful when the arch and jaw are not in the correct position, as well as with issues like overly large or protruding teeth, says Poole.

Of course, not all problems can be remedied by starting treatment at an early age. Things like genetically missing teeth can’t be addressed at age seven, Poole says. And he’s reluctant to prescribe braces for kids who are too little, since that might mean they’ll need them twice.

“I usually don’t like to put braces on a child who’s six, seven or eight years old,” he explains, “because then when they get their permanent teeth [and need braces again], in their mind they’ve already had braces and that can be difficult.” Instead, Poole generally puts braces on patients between the ages of 10 and 13, which means they’ll be off by the time they’re 12 to 16 years old.

But there are enough conditions helped by early visits to make them worth it. And though more orthodontist trips are usually needed later, “it may shorten and simplify future treatment in some cases,” says Cangialosi. Plus, getting your braces off in time for prom pics? That makes everyone happy.

What You Need To Know About Modern Braces

The Dangers of DIY Braces

How To Stop Teeth Grinding