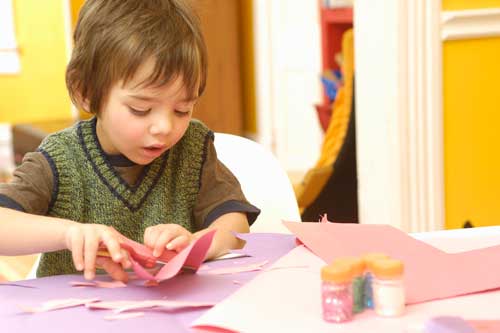 The cut-off date for kindergarten in my town is October 1. My son Frankie was born in July. I assumed that meant he’d be going to kindergarten. Now, it seems, that thought process is from another century.

My first clue was a booklet entitled, “Kindergarten Readiness,” which I read outside Frankie’s nursery school classroom before a parent-teacher conference. It included a list of things your child should be doing in various categories. Social and Emotional Development was first and left me feeling pretty good. (Does your child feel comfortable participating in group activities? Check. Is your child able to separate from parents easily? Double check. Does your child take turns? As much as my 8-year-old does.)

Then we got to Fine Motor Skills.

Does your child hold a pencil properly?

Does your child hold scissors properly?

Scissors? I wasn’t even allowed to touch scissors when I was 4, let alone hold them properly.

My head was reeling by the time I got in to see the teacher.

“So,” she asked, “what are your plans regarding kindergarten?”

She talked about Frankie’s lack of fine motor skills and the fact that he still hasn’t chosen a hand, which means he’s splitting his skills between the two instead of becoming proficient with one. She also said he’s not particularly interested in getting better; when he’s asked to do something like write letters, he says, “Oh, I’m not good at that. I’m gonna go play Legos.” (Come on, that’s a little funny.)

There’s a lot of information about whether or not to hold your child back before kindergarten. New Jersey Family magazine published a great article on the subject that presented both sides. The National Association for the Education of Young Children (NAEYC) is against the practice, and the New York Times published an interesting article against it as well.

And yet. Parents of summer boys are doing it in droves, and while the national NAEYC comes out solidly “against,” the opposite is often true on the local level. The “Kindergarten Readiness” packet, published by my local school district, concludes with this line: “Discuss your concerns with your teacher and, if in doubt, give your child the gift of time.”

Who wants to be the mother who refuses to give her child a “gift”?

My husband and I were torn over what to do. We read all about the skills he was supposed to have before entering kindergarten; but here are a few other considerations that played into our decision, and that you might want to consider if you find yourself in the same boat:

It was this last consideration that really caused us to decide to hold Frankie back. I didn’t want him starting school feeling like he wasn’t up to par.

What is “par” in this situation? According to Frankie’s teacher and the moms I’ve talked to, most kids in our district can read by the time they enter kindergarten; they can count pretty high, their handwriting is pretty good, and they often have taken extra classes. And this is BEFORE kindergarten!

I actually picked Frankie’s nursery school because of its emphasis on learning through play, rather than drilling. I’m not sorry I did—I love his teachers, and I think the philosophy led to a blossoming in his creative thinking. He’ll eventually learn how to read and write well; but will kids who’ve been drilled to death ever learn to think creatively? I know we live in a competitive world, our kids have to be prepared for a global marketplace, etc., etc. But I would say that a spirit of creativity and willingness to try new things—and fail at some—is the prerequisite for the spirit of innovation that has always been credited as America’s source of success. More and more, it seems, kids today are not allowed to try and fail; the end result is all that matters.

Take the “pick a hand” thing. I could tell Frankie, “You need to choose a hand.” I could even pick it for him and enforce a rule about it.

But now imagine that he’s given the space and time to figure out for himself which hand he writes better with. It would take longer, but he’d take away the message that he can figure things out for himself.

I hope another year of PreK will give him that time and space—before the rat race of kindergarten begins.

Have you had to make a decision to redshirt or not to redshirt? How did you make your final decision? Tell us about it in Comment.