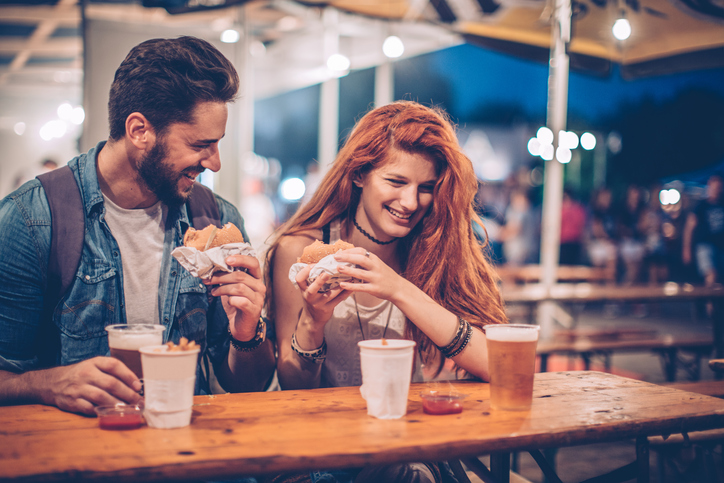 If you in serious need of some time tete-a-tete with your significant other or girlfriends? Get a sitter for the kids for the night and head to one of these awesome adults-only events going on in April.

Spend a spring afternoon trying delicious fare on a food tour through Jersey City Follow your tour guides to spots like the WURSTBAR where you’ll sample sausages and spiked cider, Porta for homemade Neapolitan-style pizza and wine and Van Hook Cheese & Grocery, where you’ll get a taste of locally-imported cheeses and jams. And the fun twist? You won’t know which spots you’re hitting until the tour is underway. Added bonus: You’ll get to meet the chefs or owners at each location, which is pretty much heaven for a foodie.

Bruce Springsteen in Photos at the Morven Museum in Princeton

Take a walk down memory lane at this exhibit that documents The Boss’s early life and road to fame. Visitors get to check out more than 40 pictures from several photographers from his early days performing chart-toppers from “Greetings from Asbury Park, NJ” to now. There will also be a panel discussion with the pros who photographed The Boss throughout his career.

Go bottoms up at a South Jersey Festival that celebrates all things beer. Try over 1,000 beers from 200 breweries from around the US. Don’t miss live performances from bands like Flogging Molly, the Front Bottoms and Streetlight Manifesto.

The Stars Shine on Autism at Montclair State University

Broadway star Marin Mazzie, known for “The King and I,’ will headline the sixth annual Montclair State University benefit for Autism New Jersey. The three-time Tony nominee  has been in “Ragtime,” “Passion,” “Kiss Me Kate” and “Spamalot.” Comedian Sunda Croonquist will also perform at this charity event for the sixth year straight. Tickets are $15 each and all proceeds benefit Autism New Jersey.

Enjoy a night of scenic views of the water while wining and dining for a great cause at this annual event. Proceeds will go to 180 Turning Lives Around, Inc., an organization that helps victims of domestic violence get back on their feet. For $150 a person, you’ll sample dozens of premium wines and martinis, and munch on artisanal cheese plates and get plates full of pasta and meat from carving stations.

Know a big fan of Whose Line Is It Anyway? They’ll love this live performance that includes improv comedy stars Colin Mochrie and Brad Sherwood. f you’re looking to make it a big night out, head to Roots, Urban Table or Chef Fredy’s Table to grab dinner before the show. Tickets start at $49.

Transport yourself to the French countryside at this wine tasting that’s showcasing some of the finest selections from Chateau Couchebout in Bordeaux. After sipping some of the good stuff, nibble on a spread of artisanal cheeses and authentic charcuterie boards of French meats and bread. $50 for members and $65 for non-members.

Take a stroll along the beach before filling up on some of the best grub the Jersey Shore has to offer. Restaurants participating in the 10-day long promotion will offer an app, entree and dessert for an affordable flat rate. Head to long-time faves like The Crab’s Claw Inn in Point Pleasant, Catch in Red Bank or try a newer spot like Spanish Olive in Brick or Surf BBQ in Rumson all for under $35 dollars each.

Belt out all the lyrics to “One Week” at this band’s only NJ performance, where fans will get hear the group’s newest live album, “Rocks Red Rocks” along with some ‘90s faves. Tickets start at $49.

Head to this gigantic outdoor space to try craft beer from stouts to IPAs to porters at this annual festival. Visitors get a 16-ounce sampling cup, access to food trucks from around the state and a healthy dose of live music.