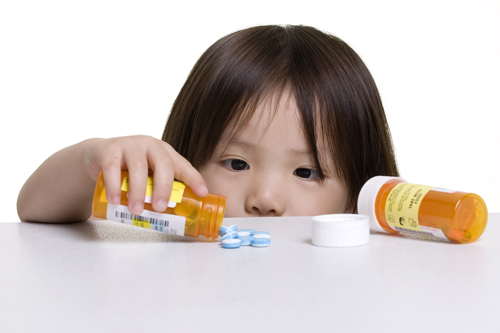 Raise your hand if you’ve ever had to call the NJ's Poison Help Line? How embarrassing is that? I’ll do you one worse: I’ve actually made the decision not to call when I probably should have (my son licked my hand cream) because I thought they might have me on a list of moms who’ve called too many times and must secretly be poisoning her children.

Then about six months ago, my daughter had a bad upset stomach. She was crying and seemed to be in terrible pain. I remembered reading about medications you should NOT give your child for upset stomach, but there didn’t seem to be a whole lot that was ok to give.

As I helplessly watched her writhe in pain, I suddenly remembered that a book I’d read a few years before—Growing Up Green: Baby and Child Care by Deidre Imus, published in 2008—included alternative medicine recommendations for a variety of ailments. I got the book from my bookshelf and found a recommendation for upset stomach: nux vomica oral pellets, manufactured by a homeopathic medicine company. I rushed to a nearby health food store and asked the woman behind the counter if they sold it. She said they did and handed me a little tube. I asked her if it was ok to give to a child, and she said it was. So I bought it and gave my daughter five pellets, in accordance with the package—and the health store woman’s—instructions.

Of course, it was only after I’d given my daughter the pellets that I felt some misgivings. How come the bottle gave only one dosage, which wasn’t dependent on weight or age? Should I have called the pediatrician first? Being a good mom of the 21st century, I took to the Internet. I looked up nux vomica on WebMD, and my heart almost stopped when I saw this: “Nux vomica is UNSAFE….[s]ide effects include restlessness, anxiety, dizziness, neck and back stiffness, spasms of jaw and neck muscles, convulsions, seizures, breathing problems, liver failure, and death.”

I called Poison Control immediately. After the operator chastised me for giving my daughter such a thing (if there is a list, I’m certainly on it now!), she told me that I didn’t need to rush to the emergency room, but I should keep an eye on her through the night and call back/rush to the emergency room if my daughter exhibited any troublesome symptoms. (Needless to say, I didn’t get a wink of sleep that night.)

Then she gave me this piece of advice: “Next time you’re thinking of giving your child a new medicine, call here first. It doesn’t have to be an emergency for you to call here. You can check in with us before there is one.”

Of course, you can always call your child’s pediatrician. But if it’s the middle of the night and you’re unsure what to do, it’s nice to know that Poison Control (1-800-222-1222) is another option.

I was especially glad to know that because, in light of the seemingly constant warnings about conventional over-the-counter medicines, I’m always on the lookout for “natural” alternatives. But, as I learned the hard way, it’s really true what they say: “Natural” doesn’t always mean “safe.”

A couple of months later, my daughter had a cough that was keeping her (and me) up all night. We all now know not to give kids conventional cough medicines, but, like with stomachaches, there’s less information on what you can give. I tried honey, which I’d seen suggested in various venues, but it didn’t work. I already had a humidifier running, but that wasn’t working either. I had some Vicks VapoRub in the medicine cabinet, and it had always seemed to work wonders when I was a child, but I seemed to remember some recent warning about it. So I called Poison Control to find out. They were very nice and told me it was fine to apply to my 8-year-old daughter, as long as I just put it on her chest; the warning was to never put it in the nostrils.

Incredibly, the VapoRub worked like a charm. My daughter and I both slept soundly that night.