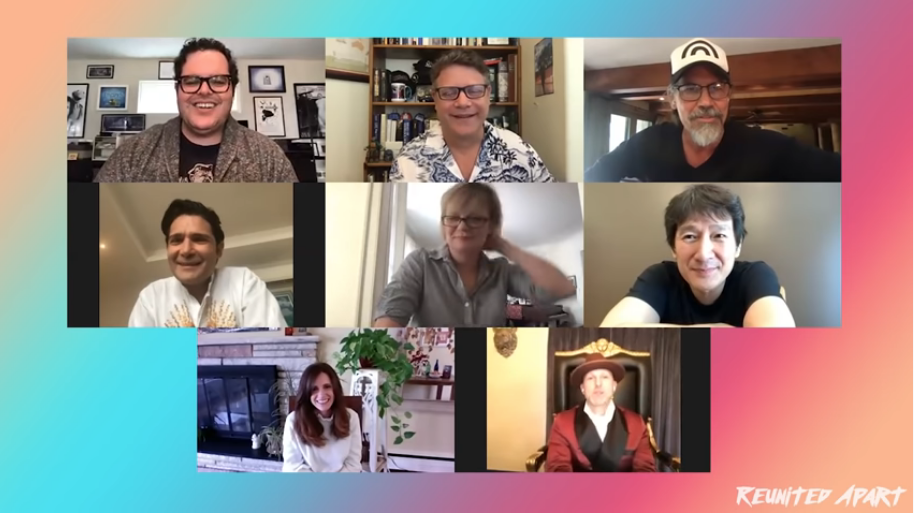 Turns out that the Goonies really are good enough. The cast of the seminal ’80s underdog adventure movie got back together on “Reunited Apart with Josh Gad” to raise funds for the Center for Disaster Philanthropy. The Goonies reunion is charming, funny and so sweet that you might even need to grab a tissue for your tears of joy.

Josh Gad, who along with John Krasinski, has been at the forefront of a mission to bring happy moments into our quarantine life with the Disney singalong special and his nightly bedtime stories. Now the Frozen star managed to pull off an epic feat by reuniting  the full cast and crew of The Goonies to chat and even reprise some of their favorite scenes from the film.

Goonies Martha Plimpton, Kerri Green, Corey Feldman, Ke Huy Quan, Sean Astin, Josh Brolin and Jeff Cohen joined Gad to catch us all up on what they’ve been doing for the last 35 years (yes, that’s really how long it has been). Most of them are still acting, except for Jeff Cohen who’s a lawyer now but really enjoyed  his moment hamming it up with his actor pals. Brolin (who we recently identify as the super serious Thanos) acknowledged the fact that without the quarantine, an event like this wouldn’t have been possible because of scheduling conflicts.

During The Goonies reunion chat, Gad brings in some additional special guests, including Joey Pantoliano (aka Joey Pants) and Robert Davi, along with writers Chris Columbus and Steven Spielberg and director Richard Donner. Donner is celebrating his 90th birthday on his first Zoom call.

The too short (in our opinion) reunion was put together to raise funds for the Center for Disaster Philanthropy, an organization that helps make sure donations get to the people most impacted by the COVID-19 crisis.

Make sure to watch the whole thing and stick around until the end when Cyndi Lauper joins in on the fun, and leads the gang in a rousing and goofy version of the theme song. The Goonies never say die!