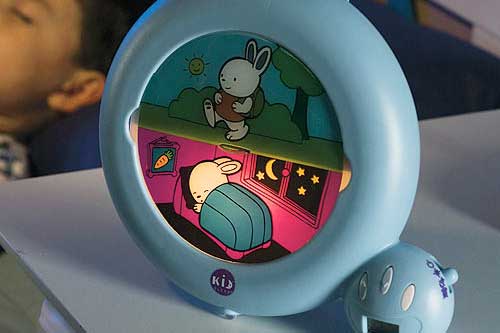 My mother tells me I slept through the night at 10 weeks old and never woke up before 8 am. So where genes and/or karma went, I have no idea, because I somehow ended up with two early risers. My 3-year-old, in particular, was waking up between 5:30 and 6:00 every blessed morning.

I read every sleep book out there, bought a white noise machine, installed room-darkening shades, moved his bedtime later, moved his bedtime earlier. Nothing worked. Somehow, his internal clock always figured it out. Between 5:30 and 6:00, I’d hear the sound of his body sliding down from his captain’s bed, his feet hitting the floor, the creak of his bedroom door—and then I’d see him, 4 inches from my face, his pudgy hands covering his eyes in shame, peeking through to see if I was about to snarl and order him back to his room (a 5:30 day) or mumble, “Come on in, Frankie” (a 6:00 starter).

One day I told another mom about my dilemma.

“You need the bunny clock,” she said.

What Is the Bunny Clock?

Officially called the KID’Sleep, it’s a clock with one picture of a “wake bunny” and one of a sleeping bunny. You set it so the sleep bunny is lit at bedtime, and the wake bunny lights up at wake time. The idea is that your child learns to stay in bed until the wake bunny’s lit.

I got one right away.

Our goal was to have Franklin waking up at 6:30, but, initially, we set the clock for 6:15. We told him that if he waited for the wake bunny, Daddy would play trains with him (the ultimate reward!).

Franklin ambled into our room at 5:50. He wouldn’t go back to bed himself, so I took him there. We repeated this exercise twice until 6:15, when we all got up but did not play trains.

Franklin came in once at 6:03 (but who’s counting?). I returned him to his bed. No trains.

We acted as proud as if he’d gotten into Mensa, and my husband played trains with him.

It’s been two months, and Franklin has not once come out of his room before 6:30.

And who would’ve thought that I’d sometimes miss seeing his dimpled little hands over his face, one big brown eye just peeking through.

Do you have an early riser? What has worked for you? Please share!